5 years ago at 8:40 am ET
Follow @IanLogue
Posted Under: NFL Commentary 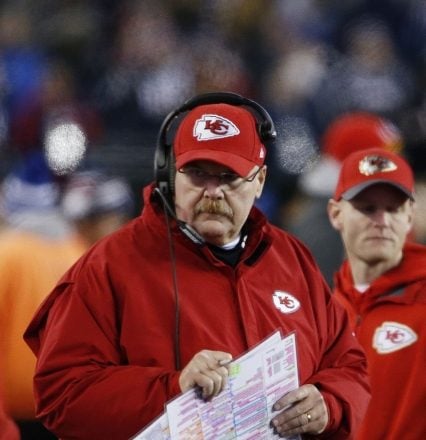 Sunday was an interesting afternoon with a variety of stories from around the league that stood out.  We’ll attempt to cover a few of them here each week, including several from yesterday.

1)  Undefeated no more – The Kansas City Chiefs suffered their first loss of 2017 after the Pittsburgh Steelers came into Arrowhead Stadium and dropped them to 5-1 on the season after a 19-13 loss.  They held the Chiefs to just three points through three quarters and the 12-3 lead Pittsburgh managed to put together over that span ended up being enough to hold them off.  Kansas City closed to within 12-10 with just over six minutes to go in the game, but Ben Roethlisberger came right back and hit Antonio Brown for a 51-yard touchdown on the ensuing drive to put the game away.

Roethlisberger was coming off of a loss to the Jaguars the previous week where he questioned whether or not he still “had it”, but that seemingly was just him whining after he came out earlier in the week calling himself “one of the best in the world”.

“You wake up Monday morning, and you realize, ‘Man, I’m still one of the best in the world [to] do what I do,’ ” Roethlisberger said via the Post-Gazette. “I’m gonna have that confidence. I’m gonna have that when I go out there Wednesday to practice and Sunday when we go to Kansas City.”

Fortunately for Roethlisberger, his team did enough to improve to 4-2 on the season and lift his ego for at least another week, while also helping New England’s chances at getting the top seed now that the Chiefs finally have one in the loss column.

2) Tough break for Rodgers – Aaron Rodgers season may have come to an abrupt end after the veteran took a big shot out in Minnesota that saw him get carted off the field during a 23-10 loss out in Minneapolis.

Unlike New England, where there the news might have taken a few days to come out, the Packers announced the injury over their Twitter channel saying that “he could miss the rest of the season.”  It’s disappointing because his loss likely will put the Packers’ postseason chances in jeopardy, eliminating a potential match-up between Brady and Rodgers in February.

Brady found out about the injury during his press conference.

“I didn’t know that. That sucks,” said Brady.

Rodgers’ injury turns the reins over to back-up Brett Hundley, who head coach Mike McCarthy said is “my quarterback”, with Joe Callahan as his back-up as the team now tries to move forward with Rodgers sidelined.

3) Colin Kaepernick trying to land a death blow to the CBA – For some odd reason, Kaepernick seems to believe that his ongoing unemployment is related to NFL owners conspiring against him, which will now reportedly see the quarterback file a collusion grievance, which holds some significance due to its potential effect on the CBA if he’s successful.

According to ProFootballTalk.com, Kaepernick is hoping to trigger the termination of the current Collective Bargaining Agreement if he’s able to prove collusion by the owners.

It seems to be a long shot, because one of the things that’s seemingly gotten lost surrounding the beleaguered quarterback is the fact that he’s not unemployed because of the fact he started the kneeling movement during the national anthem.  People seem to forget he was wearing police portrayed as pigs on his socks during training camp, as well as featuring a police officer badge as a “runaway slave patrol badge.”

Those statements were pretty telling and while his actions sparked the current league movement, what Kaepernick has already done has been ugly enough where given that teams are escorted by police and security on a weekly basis, bringing a player who openly wears socks portraying them with a word that most officers dislike being called is something that is probably the bigger reason keeping owners from seeking his services.  Not to mention the fact that adding that drama and attention to their locker room is another thing they likely don’t want either.

Given that some of Kaepernick’s concerns involve racially charged accusations that most people dislike making blanket statements about, it’s ironic that Kaepernick made such strong blanket statements about police.  While it’s hard to deny that there may certainly be legitimate things that need to be discussed with this issue, he didn’t handle it as well as he could have and he really went too far, which has also hurt his cause.

The other issue is the fact that Kaepernick wasn’t playing at a high level during his final days in San Francisco and the negatives he brings as a distraction likely outweighs a substantial enough reason for a team to take the chance of bringing him in.  Had he knelt and then made his thoughts known to media outlets to bring his grievances to light in a more controlled manner, it might have played out differently.  But the pig socks and the strong Twitter statements haven’t helped his cause, and when you take into account the national backlash the league is already feeling over the anthem protest to begin with, it would be tough for one member club to want to take the additional baggage surrounding Kaepernick on.

Let’s be honest, when you look at how things have been handled by concerned players even here in New England, it’s completely different from Kaepernick’s actions.  Even Indianapolis has handled things better, with former Patriots Darius Butler and Kamar Aiken doing positive things to try and spark productive discussions with local police.  It’s a stark contrast to what the now unemployed player did, and it’s amazing that people seem to have forgotten that.

At the end of the day, Kaepernick had the right intention with his plight but it’s ultimately been his poor execution and decision-making that has him in this position.  He may try and prove collusion, but these are likely the real reasons his NFL career may be over.

He needs to look in the mirror instead of pointing any fingers when it comes to why NFL owners don’t want anything to do with him.  Hopefully the progress he ultimately makes someday years from now in sparking a positive change, which if Kaepernick is being truthful in some of the other things he’s said, will be more rewarding than the NFL career he cost himself by going too far with his actions.

He’s his own worst enemy.  The sooner he admits that and shifts his focus to truly wanting to finish what he started, the sooner maybe he’ll finally bring about the change he sought to begin with.

4) Dolphins come away with big second-half over Atlanta – With the Falcons set to visit Gillette Stadium next Saturday night, they’ll likely be fired up after dropping a disappointing game at home against the visiting Miami Dolphins.

Atlanta put together a 17-0 first half lead, but were shut out by Miami in the second half as the Dolphins put up 20 unanswered points and forced an interception by Matt Ryan with 0:47 to go with the Falcons sitting at the Dolphins’ 26-yard line.  The turnover sealed the win for Miami, who improved to 3-2 on the season and kept them even with the 3-2 Bills, who are on a bye this week.

It’s the second loss to an AFC East team in successive weeks for Atlanta and it’s also the second-consecutive loss at home for the Falcons, who will face another AFC East foe this week on the road when they come to Foxboro next Sunday in a rematch of February’s Super Bowl.

Falcons free safety Ricardo Allen said that two home losses is a disgrace and at 3-2, they need to “reset” with a critical game on tap next weekend.

5) Chargers Upset Oakland – Despite a hapless Los Angeles team that seemed like their season was headed into the tank, the Chargers managed to get their second win of the year after beating the Raiders 17-16 with a last-second field goal.

The Raiders saw quarterback Derek Carr return from his back injury but he’s clearly still hampered, with Carr struggling his way through a 21-of-30 performance that included two interceptions.

For the Chargers, it’s their second straight victory as they appear to be gaining some momentum and confidence despite playing in a division where they’re going to have their work cut out for them in catching the 5-1 Chiefs and 3-2 Broncos.

“I thought the guys stepped up and made plays when we had to,” Chargers coach Anthony Lynn said via ESPN.  “That’s what we’ve been talking about. I’m so proud that they starting to see the fruit of their labor because these men work hard every single week.”

The Chargers will visit New England in two weeks on 10/29 and one stat to watch will be the fact that Los Angeles’ defense has struggled in the first quarter, having been outscored 50-7 in the opening quarter through six games.   The Patriots have had some success scoring points in the first quarter, which has been the Patriots’ second highest scoring quarter with 40.  The Patriots’ highest scoring quarter has been the second quarter, which has seen them put up 71 points through six games.