5 years ago at 9:21 am ET
Follow @IanLogue
Posted Under: Uncategorized 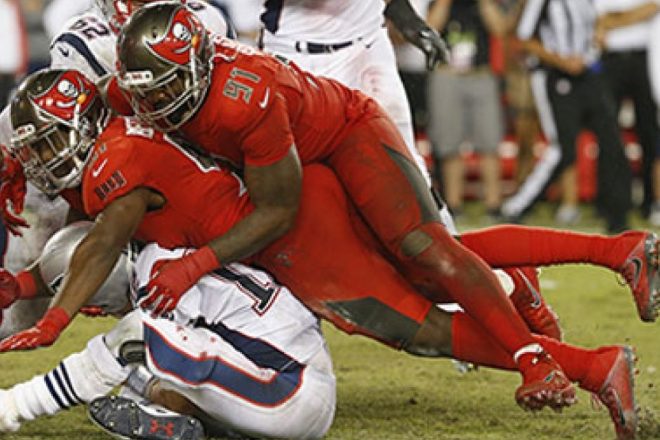 When you’re the best quarterback who ever played the game, it’s not unusual for fans to get a little nervous when you’re not out at practice.

After missing time earlier this week due to a reported AC joint sprain to his non-throwing shoulder, which he suffered against Carolina and then re-aggravated four days later against the Buccaneers, Tom Brady was back at practice Wednesday and assured fans he’s just fine.

“I’m good,” Brady said, sporting a red TB12 baseball cap and hooded sweatshirt as he stood at the podium.  “I’m not worried about it.”

It’s been a rough start for Brady, who has already been sacked 16 times this season, eclipsing the 15 he endured during 12 regular season games in 2016.  The last two games have been particularly brutal, with Brady having absorbed 6 of those sacks over that span, as well as 13 quarterback hits that the NFL managed to officially log in the stat sheets.  That total is likely higher, as not every trip to the turf receives recognition in those totals and don’t exactly tell the whole story.

The game against the Buccaneers was probably the most striking, with Brady very slow to get up after several plays, which goes against his mantra of trying not to let the other team know they hurt him.  But coming off a short week that was already physical to begin with, Thursday night’s punishment seemingly pushed him to the limit.

Fortunately, as bad as it’s been, he’s still standing and still smiling.  With Sunday’s match-up against the Jets now looming, Brady finds himself with one final road game before his club gets to spend the next two weeks at home against Atlanta and Los Angeles before their bye week.

The timing of their bye will likely be a welcomed sight, since from there the club begins a tough stretch that includes a trip to Denver, followed by a game against the Raiders in Mexico City.

The biggest question now will be whether or not they can finally start to give Brady a little better protection, since asking him to survive another 16 sacks on top of another barrage of hits over another five-game span is a little much.

For now, Brady said that there are plenty of guys who are dealing with injuries,  he’s no different than anyone else when it comes to trying to play through pain.

“You know, it’s a physical sport, so I think everyone is dealing with something,” said Brady. “It’s just part of the sport. Everyone’s running around and they’re big and they’re fast and they hit hard. You have bumps and bruises, but you just deal with them the best you can and try to get ready for the next week.”

READ NEXT:
Best Of Social Media: Week 5 Patriots vs Buccaneers
Posted Under: Uncategorized