5 years ago at 7:56 pm ET
Follow @IanLogue
Posted Under: Uncategorized 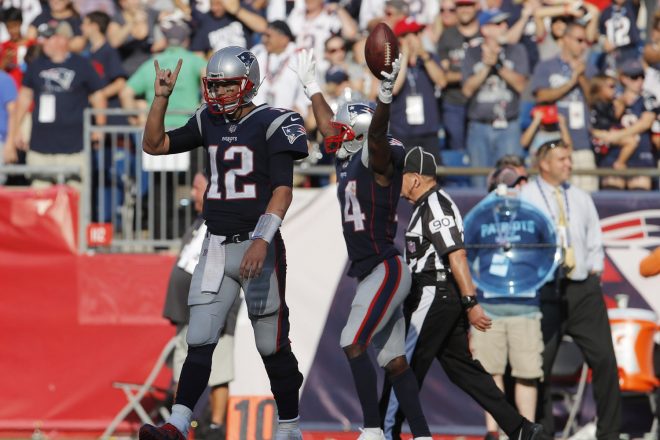 It’s been a long-time coming for Brandin Cooks, and Sunday’s performance will hopefully the first of many big moments after he finished with 5 receptions for 131 yards and two touchdowns, his best outing so far as a Patriot.

Cooks was on the end of Brady’s game-winning touchdown in the closing seconds of the game that helped the Patriots shock the Texans, giving New England a 36-33 victory as they improved to 2-1 in front of the home crowd at Gillette Stadium on Sunday.

It was only fitting that Cooks would come up big in this game, especially given some of the adversity he and Brady had faced through the first two games of the season.  The two had gotten off to a bit of a rocky start, seemingly having difficulty getting on the same page coming into Sunday’s contest.

The two connected on just five passes for 125 yards through the first two games, with Brady having targeted him 11 times (45% completion rate), including three times on third down, all of them being incompletions.  However, on Sunday, that streak came to an end after Brady connected with him early in the game on the opening drive on the third play from scrimmage.  After two carries for a loss by both Mike Gillislee and James White, Brady fired down field for a 44-yard connection on third down to Cooks, putting the Patriots in business right away at the Texans’ 10-yard line.

That led to the team’s first score of the game after Brady connected to Rob Gronkowski from 5-yards out for the touchdown to take an early 7-0 lead.

But the second half was really where Cooks shined.  Brady hit him twice to start the third quarter, the last of which went for 42-yards and a touchdown as the Patriots went up by eight points at 28-20.

Yet after a 36-yard field goal with 2:28 to go in the game gave the Texans a 33-28 lead, this was the time Brady needed to dig deep and pull of another Brady-like comeback.  For Cooks, it was finally an opportunity to step up and make a huge statement, and he didn’t shy away from the moment. 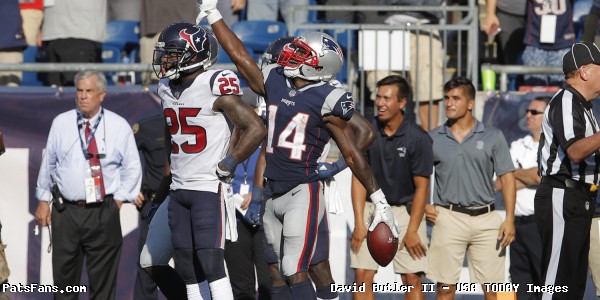 Cooks’ TD came when the Patriots needed it the most. (USA TODAY Images)

Following a huge 3rd-down field conversion by Danny Amendola where the veteran picked up 27-yards, the stage was set for Cooks and he delivered.  On the snap, Cooks broke up the left side of the field and Brady dropped in a perfectly thrown ball right over Cooks’ shoulder and into his hands as he crossed the goal line, with Cooks adeptly dragging his feet following the reception as he went out of bounds.

Replays revealed Cooks’ game-winning score would stand and just like that, Gillette Stadium erupted as the newcomer put the dagger in a Texans team that appeared poised for an upset. Brady then helped keep the pressure on the Texans by connecting with Cooks again on the two point conversion, ensuring that Houston, at best, would be able to tie the score on a field goal instead of having an opportunity at a game-winning kick.

Fortunately, it never came to that and hopefully this will be the start of bigger and better things after a solid performance by the two players.

Brady said after the game, it came down to something they saw in coverage and fortunately, Cooks made the play.

“We were running low on time, I hit Danny on that pass, looked up at the clock, and there was like, whatever, 30 seconds left,” explained Brady.  “I thought we had a little more time than that and then on the next play, Josh [McDaniels], we kind of had a two-on-1 there on the safety, and Cookie [Brandin Cooks] got behind [Chiefs CB] Kareem [Jackson] and I tried to put it out there.  It’s a game of inches, it was a great play.”

It certainly was, and it gave Brady his fifth touchdown pass of the day, the sixth time in his career he threw 5+ touchdown passes, tying him with Dan Marino for 3rd most all time.

But the most important thing is it got them above .500 and pushed them to the limit, which Brady said they talked about two weeks ago when they fell to the Chiefs at home. Now it will hopefully be something to build on over the course of the rest of the season.

“We just kept fighting, that was the most important thing,” said Brady. “We were in this stadium a couple weeks ago. We talked a lot about that – playing four quarters – playing all the way down to the last minute, we needed it today.”

READ NEXT:
Texans Might Finally Have a QB, But Patriots Still Have Brady
Posted Under: Uncategorized

By: Robert Alvarez
Mic'd up sights and sounds from the Patriots' sidelines during Week 13 against the Buffalo Bills at Gillette Stadium.
9 hours ago