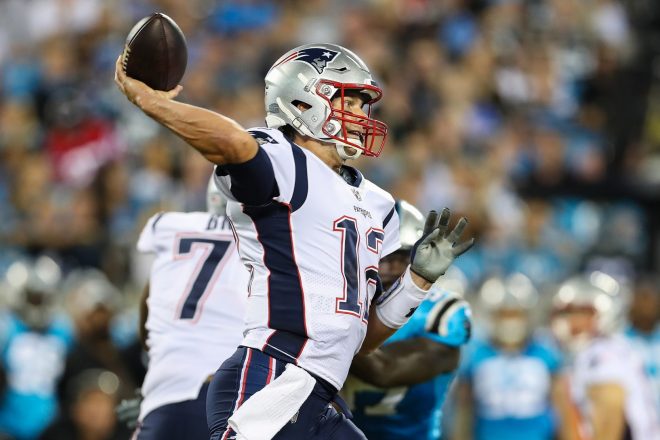 The New England Patriots concluded their 2018 preseason schedule at MetLife Stadium in New Jersey on Thursday night as final roster spot battles dominated the storylines heading into the game.

Everything else is just noise.

Brady and Solder hug it out, and my biggest takeaway is my goodness Nate Solder is a gigantic human being. #WBZ pic.twitter.com/eSZNmjotYy

In the first half there wasn’t much scoring as neither offense could get much going, a Stephen Gostkowski 33 yard field goal put the Patriots up 3-0 after one.

On defense, 2018 undrafted free agent JC Jackson made his presence known with his first of two interceptions on the night.

But not before K.J. Maye showed off his speed.

With about eight minutes to go in the half and not much happening, a funny moment was captured when former linebacker turned sideline reporter Rob Ninkovich shared a personal story about Rob Gronkowski’s house robbery.

If you're rookie Ralph Webb and Brady winks at you like this, do you faint? pic.twitter.com/DdUq0bguaX

In the third quarter, J.C. Jackson tallied another highlight interception.

The pick led to a big 45 yard reception for K.J. Maye.

Ralph Webb put the Patriots back in front with a short 1 yard pass from quarterback Danny Etling. 10-6 through three.

With four minutes to go in the game, Etling pulled off the highlight of the preseason with an incredible 86 yard touchdown run to put the Patriots ahead for good at 17-6.

Danny Etling has 115 yards rushing in this game. This preseason, the Patriots rushing leader was Jeremy Hill with 107 yards.

"Josh, can I run that Danny Etling play next Sunday?"

The Giants would tack on a garbage time touchdown as the Patriots would go on to conclude the preseason with a 17-12 victory and a 3-1 record.