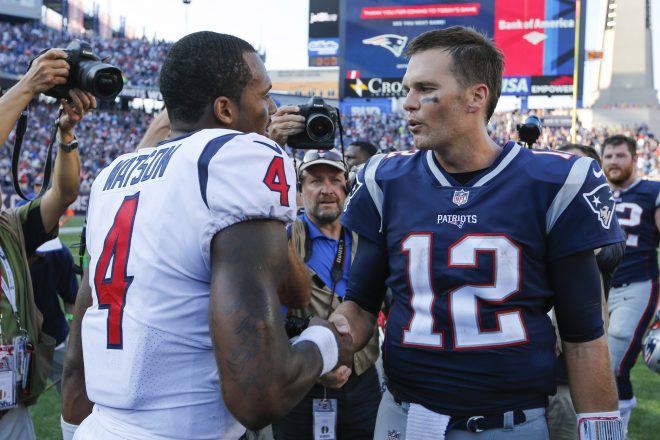 FOXBOROUGH – All the Houston Texans ever needed was a quarterback, and now they finally have one.

The hero of the College Football Playoff from last year, former Clemson quarterback Deshaun Watson, showed the Patriots a lot in his first NFL game against the Super Bowl champs. Watson, who helped engineer the titanic upset of Alabama back in January, bedeviled the Patriots with both his passing arm and his scrambling ability. During this run of dominance by the Patriots over the Texans, the one missing element from these normally lopsided matchups has been the quarterback position for Houston.

Now that Houston has a quarterback, it’s the rest of the league that will have a problem.

Fortunately for the Patriots, they still have the GOAT. Trailing 33-28 late in the game, Tom Brady hit Brandin Cooks for a 25-yard touchdown pass with 23 seconds left, then hit Cooks again for a 2-point conversion. The Patriots escaped Gillette Stadium on Sunday with a 36-33 win over the Texans. Houston nearly pulled off what would have been their first win ever in Foxborough, but in the end the Patriots beat the Texans in situational football, and victory was theirs.

Houston certainly played well enough to win the game. On both sides of the ball, the Texans showed how formidable they can be. Watson finished with 22 of 33 passing for 301 yards and two touchdowns and a passer rating of 90.6. Watson did throw two interceptions, but one of them was on the final play of the game on a Hail Mary. Watson also had 8 rushes for 41 yards, and continually made Patriot defenders miss on what should have been sure sacks. Watson was actually sacked twice, but thanks to his running ability, it could have been much worse.

On defense, the Texans sacked Brady five times, two of them by the formidable Jadeveon Clowney. One of the sacks, by Whitney Mercilus in the second quarter, resulted in a Brady fumble which Clowney picked up and ran it in for a 22-yard touchdown. The Texans held the Patriots to only 59 yards rushing on 20 carries, and in what is becoming a troubling pattern for the Patriots, had a key stuff of Mike Gillislee on third and one in the fourth quarter.

But in the end, Brady had the better of things. He finished 25 of 35 passing for 378 yards and five touchdowns and a 146.2 passer rating. His 378 yards broke a 31-game streak of Houston not allowing a 300-yard passer. Cooks had 131 yards receiving on five catches and 2 touchdowns, Rob Gronkowski had 89 yards on eight catches and a touchdown, and Chris Hogan had four catches for 68 yards and two touchdowns.

The key difference between these two teams was revealed with 3:23 left in the fourth quarter, and Houston driving towards which would have been a game-clinching touchdown to make it a two-score game. Houston had the ball at the Patriot 27, leading 30-28. Lamar Miller ran twice for nine yards, but on third down Miller was stuffed by Patrick Chung, and Houston was forced to go for the field goal. Ka’imi Fairbairn nailed his fourth field goal of the game (without a miss) to make it 33-28, but the Texans missed out on making it a nine-point lead and enabling Brady to do what he does.

Brady takes over at the 25-yard line, with 2:24 left, one timeout and the two-minute warning. Danny Amendola dropped a leaping catch attempt on first down, then David Andrews gets called for holding. You’ve now got second and 20 from the 15. Brady then gets 23 yards in two plays from Gronkowski, who seemed over his groin injury from last week at New Orleans.

Cooks then hauled in a sideline pass for 18 yards, but Houston then had two chances to put the game away. On first down at the Texans’ 44, Brady was strip-sacked by Marcus Gilchrist, but Andrews atoned for his holding penalty by pouncing on the loose ball. On the next play, Brady tried to hit Cooks on a deep post pattern, but Corey Moore made what should have been an interception. Moore lost the ball as he hit the ground, so the Patriots continued on life support.

On third down and 17 from his own 49, Brady was able to find Amendola on a deep right sideline pattern for 26 yards to the Houston 25. And on the next play, Brady dropped back and coolly dropped a pass into Cooks, who did manage to keep both feet inbounds and finish the catch in the left corner of the end zone. The Patriots went for two, and Brady hit Cooks at the left pylon to make it a 3-point Patriot lead with 23 seconds left.

Watson still had a chance to get the Texans in position for a field goal. On first down at the Houston 25, Watson was again able to dodge pressure and hit DeAndre Hopkins for 21 yards. Houston had one time out left. Somehow, despite everyone on the Texans yelling “Time out!”, time wasn’t called until 3 seconds left. The Texans let ten precious seconds tick off the clock before the final timeout was finally called. Watson was then forced to attempt a Hail Mary instead of getting into field goal range with one play. Watson’s long heave was picked off by Duron Harmon to settle things.

Bill Belichick immediately mentioned “situational football” to begin his press conference. Brady made the plays he needed to, the Texans didn’t, and Houston had a clock brain cramp at the worst possible time. Bill O’Brien, Houston head coach and former Belichick assistant, will have to explain how come a timeout was not called earlier. But there is no question that he had his team very well prepared to play an opponent he knows very well.

The Patriots will have to deal with another mobile quarterback next week, as they will have Cam Newton and the Carolina Panthers coming here. Watson may have surprised the Patriot coaching staff a bit, but Newton certainly won’t.

Meanwhile, Brady continues to make all 40-something people proud. His fan base isn’t exactly pining for Jimmy Garoppolo yet, either.