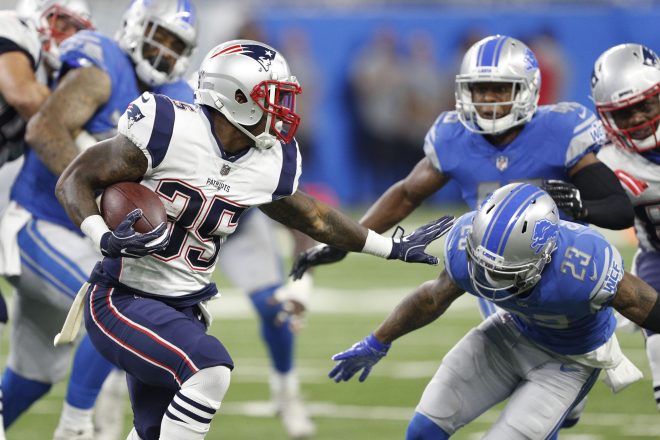 Only ten teams remain undefeated after just two weeks, and two of those clubs are 1-0. The best game of the week includes a pair of those teams and two of the NFL’s highest paid quarterbacks. Atlanta is at Detroit in a matchup that actually looks better now than it did when the schedule was released last spring.

Atlanta (at Detroit) and Oakland (at Washington) are both three point road favorites, highlighting the slate of NFL Week 3 games. The Patriots are favored by two touchdowns in Foxboro against Houston in a rematch of last year’s playoff game. The Browns are surprise road favorites at Indianapolis as the Colts continue their post-deflategate descent into the abyss.

Four of the nine winless teams will attempt to avoid an 0-3 start while facing a 2-0 club. Starting the season in that manner will put any head coach and general manager on the hot seat. Teams such as the Giants and Bengals that are taking an unexpected drastic downturn are already feeling the heat. In other cases owners of bad teams don’t have enough patience for a team to develop, a situation exacerbated by sports talk radio and anonymous internet commentary. The inevitable result will be another HC or GM change, and the losing cycle simply continues.

Sunday, Sept 24 at 9:30 am ET on Yahoo.com. Announcers: Andrew Catalon, James Lofton.
Baltimore Ravens ‘at’ Jacksonville Jaguars in London
No television broadcast except in each team’s home market.
Ravens favored by 3½; point total 39½

Sunday kicks off with the first of three 2017 breakfast football games. The Ravens and Jaguars play at Wembley Stadium, one of five international contests to take place this season. The Baltimore defense already has ten turnovers, eight interceptions and eight sacks. In case any defensive coordinator could not figure it out, last week Tennessee gave the league a blueprint on how to game plan against the Jags. It’s simple: put eight in the box to neutralize Leonard Fournette and dare Jacksonville to pass. Since 2014 Blake Bortles has an NFL high 66 turnovers and 53 picks.

For the Browns to be favored against anybody other than the Jets is a surprise. For that to happen on the road is newsworthy. The Colts had gotten away with dominating a weak division from 2003 on, after Eddie George retired and Steve McNair’s body gave out for Tennessee. Indy may very well win this game, but the cosmic retribution for attempting to frame the Patriots will continue for years.

Pittsburgh is notorious for playing down to (or below) their competition when away from Heinz Field. That shouldn’t be of any concern Sunday. Mike Glennon has thus far proven that he did not deserve his free agency contract and should forever return to backup status. The Steelers have attempted to upgrade their secondary the last two off seasons. This is just another tuneup for them until they face some real competition.

Sunday, Sept 24 at 1:00 pm ET on CBS; Spero Dedes, Adam Archuleta
Denver Broncos at Buffalo Bills
Broadcast in New York (except NYC and Albany), and most of the western US.
Broncos favored by 3; point total 39

Who are the Broncos? The team gifted with a slim home victory against an average team in week one? Or the the one that looked like a well balanced machine, dominating against what we thought was a formidable opponent last week? The Buffalo offense is far too one-dimensional and reliant on LeSean McCoy for him to be effective.

A repeat of last season’s playoff game would not be a surprise. The Houston defense is still as formidable as it was last year when they led the NFL in total yards allowed. The Texans have not given up a touchdown pass this season and are limiting opponents to a 26% conversion rate on third down. Most remarkably they have not permitted an opponent to pass for 300 yards in 31 consecutive games.

The Patriots will be without tackle Marcus Cannon, which makes an already tough job more difficult for the offense. The problem for Houston is that their offense is a work in progress. Rookie QB DeShaun Watson is still learning the game and has no playmakers to work with. The Patriot offense will eventually get it in gear and Houston doesn’t have the horses to keep up.

Carolina has allowed a mere six points in two games but now faces their first legitimate offense. The problem for New Orleans is that their defense is one of the worst in the NFL for the fourth straight season, and seems to be getting worse rather than better.

Minnesota is another of many teams that looked great one game (week one) and awful (week two) this season. The Bucs have only played one game and since it was against Chicago we have to take it with a grain of salt. Despite that caveat Tampa looks strong on both sides of the ball and should be considered a serious playoff contender.

The much anticipated Super Bowl hangover has not materialized for Atlanta. 2-0 Detroit has looked good in both of their games as well. RB Ameer Abdullah appears to be fully recovered from a 2016 Lisfranc injury, which has helped to diversify the Lion offense. A dome road game aids Atlanta’s chances, but the Falcons will be without leading pass rusher Vic Beasley (hamstring).

Fox is sending their number one announcing crew to this game, and beaming it in to nearly every neutral television market. Considering how the Giants have played so far that may be a mistake, despite all the scattered New York transplants. Despite some injuries the Eagle defense should dominate New York’s porous offensive line. The vaunted Giant defense hasn’t done anything special yet, though that could change against an inconsistent Philly offense. Perhaps the G-men get it together with their backs up against the wall, but the Eagles are the superior team.

Seattle is one of many teams that looks awful early this season due to the deficiencies with their offensive line. Facing an aggressive Dick LeBeau defense without the benefit of their 12th man won’t help. Seattle’s potent defense will once again have to carry the day for the Seahawks to eek out a road victory.

In recent seasons the Chargers seemed to lose every close game they played in, losing games they should have won. The proper response of a change in head coach was supposed to curtail that epidemic. So far this year we just have more of the same. If you enjoy watching good running backs then this game is a must-see, featuring Kareem Hunt and Melvin Gordon. KC has the better defense and better head coach.

This looked like it should be a quality, highly competitive game when the schedule was announced back in April. Both offensive lines are sieves, the Bengals don’t know what it is like to score a touchdown, and Green Bay’s defense is a work in progress. Despite injuries and their o-line, Green Bay should win this game easily.

The Washington offense is still forming an identity after free agent departures of wide receivers DeSean Jackson and Pierre Garcon. Marshawn Lynch has added another dimension to an already potent Oakland offense. The Raider defense (4.8 yards per carry) hasn’t noticeably improved so the Redskins should be able to keep this game tight.

Here we are with yet another schizophrenic team, the Cowboys. Expect Dallas to rebound after last week’s embarrassment. The Arizona offense is lost with no compass without RB David Johnson. The Cardinal defense used to dominate but that is no longer the case. Expect the Cowboy offensive line to control the game while the Arizona offense sputters.