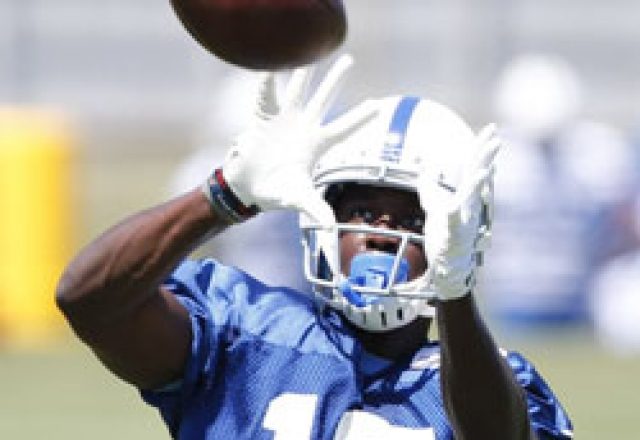 The Patriots swung a trio of deals on Saturday and perhaps none was bigger than the one where they traded QB Jacoby Brissett to the Indianapolis Colts to land WR Phillip Dorsett. Let me put the caveat out there, that I wasn’t in favor of trading for a wide receiver after Julian Edelman went down with a season-ending injury.

With the top four of Chris Hogan, Brandin Cooks, Danny Amendola and Malcolm Mitchell, I felt that they had plenty of depth and could afford to work in one of the young guys, Austin Carr or Devin Lucien into the offense.

But with the team trying to put Amendola on a pitch count, perhaps Mitchell’s injury is worse than previously thought. Or perhaps the thought of acquiring a player with Dorsett’s skill set was too good to pass up. And once Cyrus Jones was lost for the year, that put them in a position of needing a punt returner. So Amendola may be a 3rd down specialist and the team’s punt returner in the meanwhile, while they try out different players for the role.

Which brings us back to Dorsett. He was a first round draft pick in 2015, and the Colts selected him with the 29th overall pick. It was surprising at the time as they needed defensive line help. The Patriots selected Malcolm Brown with the 32nd overall pick. But at the time, I really liked this player when he was coming out of the draft. At that time I wrote that he’d be a great fit for the Patriots and did a pre-draft profile of him and his potential fit on the Patriots offense. Now a couple of years later, he’s a member of the team as they prepare for the Kansas City Chiefs.

Dorsett was labeled as a draft bust and disappointing while a member of the Colts in his first two seasons and yes his production hasn’t been off the charts and it becomes an intriguing situation. Was his production limited by his route running ability? When he came out in the draft, it was an area that he needed to improve on. Or did the Colts underutilize the speedster? I spent Sunday watching some of the Colts games on tape and a few things stand out. Indy mainly used him as a long range decoy, clearing out large areas for Donte Moncrief and T.Y Hilton. There was a definite lack of chemistry with Andrew Luck, there were several instances where Dorsett seemed to be open and Luck was forcing the ball into coverage elsewhere. Was it a lack of trust?

So, how does Josh McDaniels use his newest weapon in the passing game to his advantage?

Much will depend upon Dorsett learning the playbook, putting the time in and developing that all-important chemistry and trust factor with Brady. Dorsett didn’t have that with Luck. Whether it was his fault or not doesn’t matter now. He’s starting here with a clean slate.

I think the Colts just underutilized Dorsett and decided to just to use Moncrief and Hilton underneath. While he wasn’t a great route runner in college, he definitely showed more than he has been used in Indy. I see McDaniels using him in a lot more situational type formations than just as a guy who runs a fly or post pattern to open up the underneath routes for others as a decoy.

His success or failure will depend a lot on himself. We’ve seen plenty of wide receivers come to New England and fail. It will be intriguing to watch him this season and see how he can progress. I expect he still won’t have prolific numbers, in the 35-40 catch range for the team this year. But they can be very productive numbers, such as Hogan and Amendola’s.

The Patriots have always prided themselves on having shorter, quicker wide receivers who work the short and intermediate parts of the field. Now, along with Cooks and Hogan, the Patriots have a trio of burners on the outside. This is a group that can easily stretch the field vertically as well as horizontally.  With a healthy Rob Gronkowski and a bevy of backs who can catch the ball out of the backfield, this offense is going to be fun to watch. And they just got a shiny new toy to play with.