6 years ago at 10:29 am ET
Follow @SteveB7SFG
Posted Under: Patriots Commentary 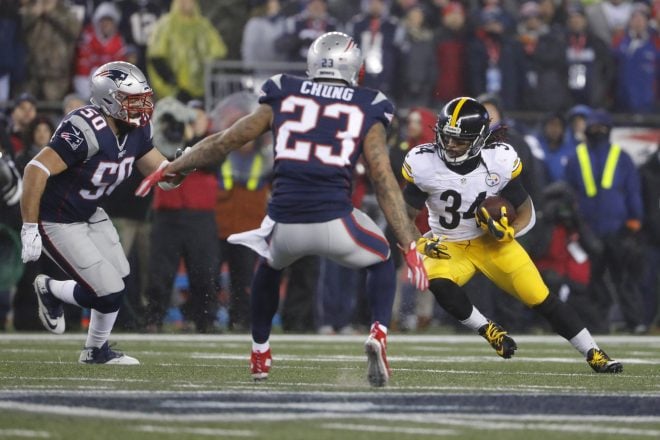 The Patriots begin minicamp this week in rainy, cold conditions. The temperatures are not what one would expect in June with highs hovering only around 50 degrees. The weather resembles late October more so than early June but ball security drills become more important in this type of weather and at least today, expect to see some more of that. But for the other two days of camp this week? What are we looking for?

Here are three things to look for in the three days of minicamp this week. Don’t you love how these things seem to work out?

Linebacker Depth: The Patriots have a really deep roster in 2017. But one area that still has some question marks is the linebacker position. Dont’a Hightower’s health is of primary importance this season. As we pointed out during free agency, the Patriots don’t have a man that can do the things he does. So, who else steps up in 2017?

The Patriots brought in veterans Shea McClellin and Kyle Van Noy last year and each of them contributed at times in the Super Bowl run of 2016. McClellin probably has a bit more flexibility and can do more things than Van Noy, but the former Lion has plenty to offer in terms of coverage and blitzing and both will be competing for reps.

Second-year player Elandon Roberts will be looking to make a big jump in play in Year 2. The undersized but physical run-stuffer needed to improve in coverage this season and it will be interesting to see how well he fares in 2017. But an undrafted free agent may be looking to make a spot for himself as well.

Harvey Langi is an intriguing guy and a one that could carve out a role for himself as a rookie. He had a very successful junior season in college but his coaches decided they needed help at the edge and moved him from linebacker where he was far less effective. There is a lot to learn about playing the LB position in New England, look for Langi to make his mark on Special Teams first. If he can do that, then his path to the roster should be clearer as well as a shot at producing on defense. 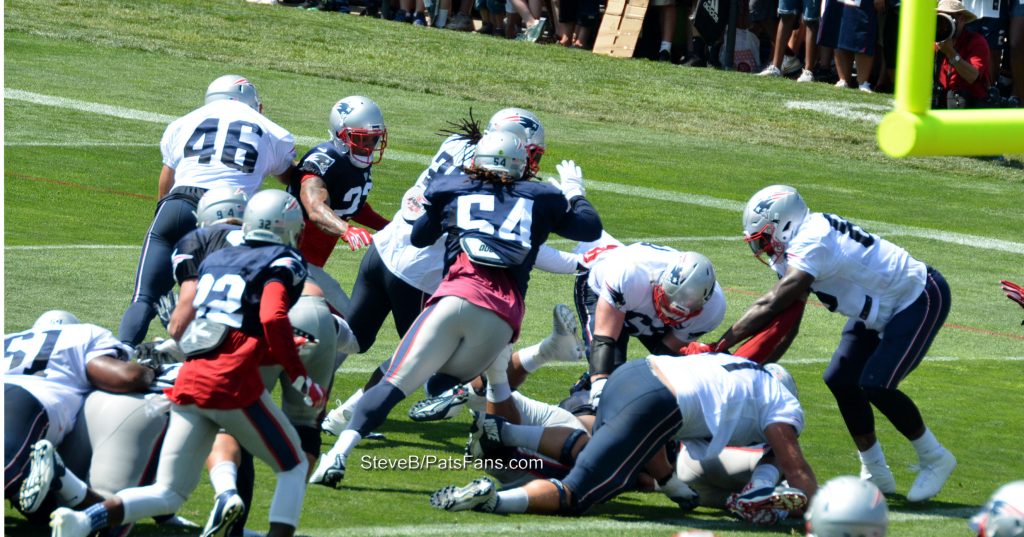 Dont’a Hightower is the Patriots best linebacker by far and one they’ll need healthy in 2017. (SBalestrieri photo)

Safety Reps: The Patriots have one of the better free safeties in Devin McCourty, he isn’t going anywhere and is the like the QB of the secondary out there. The Patriots like to move him around and he can occasionally move down into the slot because he can cover like a corner…which he once was.

The question revolves around the strong safety position. Pat Chung was outstanding in his first two seasons back in New England as the team used him to his strengths closer to the line of scrimmage than his earlier tenure with the team. But his play took a step back last year. Is it a sign of things to come? He plays a very physical style and the wear and tear on his body may be beginning to show. Who will step up for him?

The most obvious choice is Duron Harmon who was rewarded for his stellar sub-package play by getting a new contract this season. But the Patriots used him as the center fielder when sliding McCourty down into the slot. To bring him down into the box would limit the effectiveness of moving McCourty around.

Jordan Richards would be the most obvious choice but his play too suffered in 2016 where he barely saw the field. The Patriots used a 2nd round draft pick on him but thus far he’s yet to show that was a worthwhile pick. From watching him in coverage at practice, he seems a bit stiff in the hips but is better suited for the spot in the box. Nate Ebner and Brandon King are more special teamers than safeties on defense.

Running Back Usage: With no pads on until training camp, the running backs won’t get to show what they can do in the running game until then. But with a plethora of pass catchers, how they’re used and how much is very much up for grabs. The Patriots are a pass first team and the backs must be productive and protective of the QB.

James White, fresh off his Super Bowl heroics and holding a new contract has the inside edge on his competition as he should, but he knows that the team won’t base any decisions on what he did a year ago but on what’s he’s doing this year. Dion Lewis should be completely healthy after coming back from ACL surgery more than a year and a half ago. If he’s got his trademark elusiveness back, Lewis is a very dangerous man with the ball in his hands and could be used as a returner this season.

Newcomers Rex Burkhead and Mike Gillislee offer a bit more of versatility and seem to be as good if not better at running the ball than catching it. Both were paid decent amounts of money this season. Gillislee seems to be the primary running back while they are keeping the ball on the ground. With the size equivalent of Stevan Ridley and a very good burst at the line, he looks to have a successful year on the ground.

The one intriguing guy is 2nd-year player D.J. Foster. Like Lewis, he is electrifying with the ball in his hands. He was signed as an UDFA last season and didn’t get to flash very much in 2016. But now that he’s had a year in the system, he’s going to be a guy that will be intriguing to watch. Can he do enough to warrant a roster spot in 2017? Time will tell, and minicamp will be a prime spot to show what he can do.