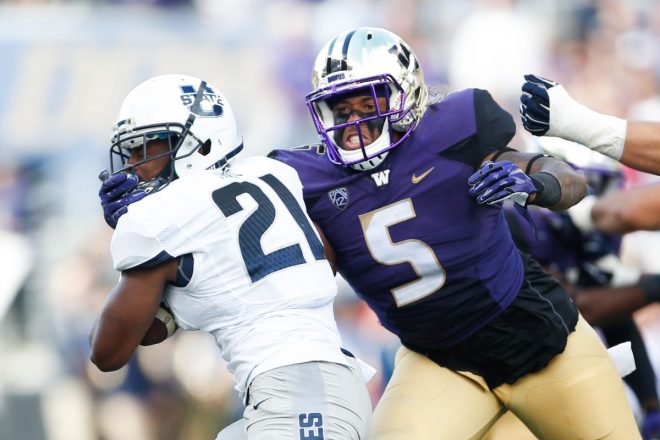 The Patriots are certainly going to be looking at players on the edge with the picks that they have left in the NFL Draft.  Trey Flowers, Kony Ealy, and Rob Ninkovich are the guys we look to at providing the edge pressure but they still have DL Lawrence Guy who can play on the edge as well as kick inside as an interior pass rusher. Geneo Grissom is a STs player.

As we’ve repeated here many times, edge rushers are like cornerbacks, you can never have too many good ones. Many experts are looking for the Patriots to double dip in the draft next week, taking a DE and an OLB that can provide pressure as well. And this next guy maybe a bit of a sleeper.

I was watching a few games of Washington looking for tape on Sidney Jones and this next player began to jump off the screen in the early games of the season. So much so, that we grabbed him in our Mock Draft a week ago.

Joe Matthis from Washington is a 6’2, 266-pound defensive end/outside linebacker who is a well-rounded edge player. He shows good leverage in the running game and an ability to get to the passer despite not being a “quick twitch” athlete. He’s a guy that is versatile and can play with his hand in the dirt or stand up as an outside linebacker. That is always a plus in the Bill Belichick book with the Patriots.

He has good, heavy hands and uses them well to shed blockers at the line of scrimmage. Matthis is a very physical player who goes non-stop and all out on every down. He’s a sleeper because he was injured after just six games in 2016 and there was very limited tape on him.

At the time of his injury, he led the team with five sacks thru six games. A look at how their defense faded after his injury may provide a good look at how valuable he was to the team.

– Good frame and strength on the edge

What his Role Will Be:
Matthis’ role would be to initially be a part of the rotation outside as an outside linebacker and drop into coverage for the Patriots. He can also move on to the defensive line and play with his hand in the dirt as a defensive end and rush the passer.

Will his Role Change from Year 1-2?
Yes, with some added lower body strength and more work on his pass rush moves, he could easily develop into a full-time very productive player

What Current Player on the Roster Will He Replace?
Grissom, Matthis will be a guy that they’ll feel that they plug on the edge and get to play special teams.

What is his ST Value?
Good

Conclusion:
Matthis is a guy who will be intriguing to see where he ends up in the draft. The Washington coaches moved him around and after a productive start of 2016, he suffered an injury that sidelined him for the rest of the year.

He has very good, heavy hands and has a violent punch that will keep defenders off of him and allow him to get some separation. He has a good bull rush with good bend coming around the edge. He’s very good at setting the edge in the running game, a must in the Patriots system.

Matthis is a Patriots kind of player. He’s versatile, can play standing up as an outside linebacker or with his hand in the dirt, has good instincts and a high football I.Q. He plays with a violent streak, never stops working and will make plays all over the field with a non-stop motor.

Matthis is a guy who won’t be in high demand because of his injury, his lack of taped production and the fact that he’s isn’t an athlete that will blow people away with his measurables. But if he’s on the board in the fourth round, the Patriots could land one of the sleepers of this draft.