After the initial mock draft we conducted, we’re back for another crack at the big board. There were big changes in this draft as the big board had changed, as we’ve mention in the past. The Patriots still have some holes to fill although they still have the flexibility in the salary cap to do just that.

For this second mock draft (4-13), I used the big board of Matt Miller, Bleacher Report

Right now, the Patriots don’t pick until Round 3, #72 due to some of the trades that they’ve swung for Brandin Cooks and Kony Ealy. While they may still swing a deal to move up into the first two rounds, right now we’re going with what they have. In this mock, we’re going under the assumption that Malcolm Butler will sign his tender and play in NE for at least the 2017 season, so that changes our outlook considerably.

Here is our Patriots Mock Draft 2.0 – Patriots Get Defensive: 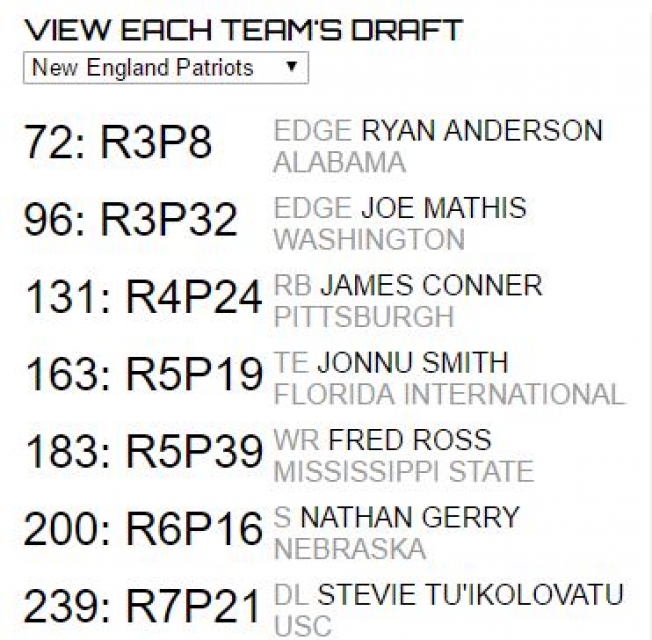 Round 3, Pick #72 Linebacker/Edge Ryan Anderson, Alabama:
No change from Mock 1.0, Anderson will be a Day 1 starter at the SAM linebacker position next to Dont’a Hightower. Coming from a championship football program at Alabama with Bill Belichick’s buddy Nick Saban and playing in a similar system means his learning curve will be an easy one.

Round 3, Pick #96 Edge Joe Mathis, Washington:
The Patriots get a possible steal at defensive end with Mathis who was coming into his own when he injured his foot that required surgery after just six games for the Huskies in the 2016 season. In those six games, Mathis garnered 25 tackles, five sacks and a pass defensed in his final season.

He’s very good at setting the edge in the running game and has the hands, strength, and quickness to come off the edge and put pressure on the quarterback. Limited tape due to his injury will push him down the board…and right to New England.

Round 4, Pick #141 RB James Conner, Pittsburgh:
Conner is another steal for the Patriots as he’s had to battle back from a torn ACL and cancer specifically Hodgkins Lymphoma in 2015. He returned in 2016 and gained more than 1000 yards with a 5.1-yard average and 16 touchdowns.

He’s got tremendous size at 6’1, 233-pounds and will move the pile in short yardage and on the goal line. He’s a punishing runner that runs low, hard and gets yards after contact.

Conner’s draft profile from us can be seen here:

Round 5, Pick #163 TE Jonnu Smith, Florida International:
Smith is a move TE at 6’3, 248-pounds but has shown the willingness and strength to block in the running game. Smith has the ability to work all three levels of the field. He has the speed to run right by linebackers in coverage. Had 42 catches for 506 yards and four touchdowns in 2016.

He good with the ball in his hands and can make plenty of YAC (yards after the catch). He has loose hips and possesses good lateral movement but has to work on his hands. He’s had 10 drops the least two seasons.

Round 5, Pick #183 WR Fred Ross, Mississippi State:
Ross nicknamed “the Boss” was a favorite target of Dak Prescott before he moved on to the Cowboys last season. Ross has been heavily scouted by the Patriots and although he missed Prescott still put up good numbers in 2016, 72 catches, 917 yards and 12 touchdowns for the Bulldogs.

He doesn’t possess great top-end speed and has far too many drops (8 in 2016), but he uses his body well to block out defenders. He’ll fight for position when the ball is in the air and offers good punt return capability, something that may earn him a roster spot. With the WR position stacked in New England, that may be just what he needs to stick.

Round 6, Pick #200 S Nathan Gerry, Nebraska:
Gerry is an in-the-box safety that is very solidly built at 6’2, 218-pounds. He was named third team All-Big Ten with 68 tackles, 5.5 for loss, four interceptions and eight pass breakups. He has very good instincts with both the run and the pass.

He’s limited athletically however and despite having decent straight-line speed with 4.58 in the 40 Yard Dash, he doesn’t have the agility to be a deep cover safety. He’d be placed in the role that Pat Chung has excelled in as a box safety, patrolling close to the line of scrimmage.

Round 7, Pick #231 DL Stevie Tui’kolovatu, USC:
Tui’kolovatu is an overaged prospect (26), due to a two-year commitment with his church in the Philippines. He played at Utah for a couple of years but left for USC and more playing time in his final season.

He’s a nose guard at 6’1, 331-pounds and can eat double teams in the running game which allow the linebackers to stay to unblocked to make plays. He’s got a wide stance and is very difficult to move off his spot. On a two-down player but he can be the long-term answer to Alan Branch. He’d be a nice addition to the rotation inside