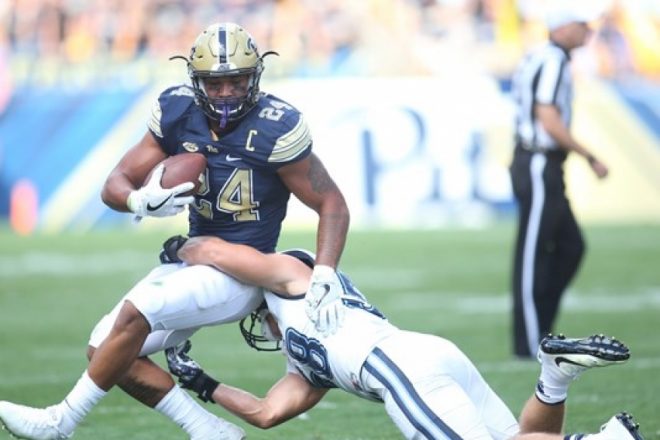 Inspirational Player Can’t Be Held Down

The Patriots’ offense needs a big bodied power running back to replace free agent LeGarrette Blount. He was terrific in 2016 rushing for over 1100 yards and a league leading 18 touchdowns but he’s 30 years old now, a time when big backs begin to break down. He slowed considerably down the stretch.

The team could use a younger, upgrade at the big, physical back position, someone that can move the chains on third down. Get the tough yards in goal line situations and act as a closer late in contests when the game is in hand.

James Conner from Pitt is exactly the kind of player that would fit the bill in a matter of speaking. Bill Belichick loves players like him, he’s an inspiration to his teammates. He injured his ACL in 2015, and while doctors were treating that, they came across cancer, specifically Hodgkins Lymphoma which he took on at the same time.

As a result, he won the Disney Spirit Award and ACC Brian Piccolo Award as well as first team all-conference honors in 2016. He rushed 216 times for 1092 yards (5.1-yard average) with 16 touchdowns for the Panthers. He added 21 receptions for 302 yards for four more scores.

Conner has tremendous size at 6’1, 233-pounds and is extremely tough and will not be brought down with arm tackles. He lowers his head and punishes would-be tacklers on contact. He is extremely strong on the lower half of his body and when running between the tackles, especially in short yardage or the goal line, he doesn’t need a hole, he’ll make one.

However, he doesn’t have great top-end speed and will struggle at times turning the corner when running to the outside. He has good balance and can make the first man miss while possessing an excellent stiff arm to jolt tacklers and break free. He’s a good, willing pass blocker and shows decent production coming out of the backfield in the passing game with good hands.

– Medical questions will follow him after ACL, cancer treatment

– Runs a little stiff in his hips

What his Role Will Be:
Conner’s role will be as the Patriots big, physical, move-the-pile back. He’d take over the Blount role, especially as a red zone, goal line back. He’ll be part of the rotation on early downs and as situations dictate.

Yes, with improved production as he becomes more familiar with the offense, and in the passing game, he could see his role increase.

Conner, if he can keep a clean bill of health is going to be a very productive, physical back in the NFL. He’s the type of guy who may not wow you for three-quarters but in the fourth quarter, he can wear down teams and punish them with a battering ram style of running. He’ll be the designated closer when the team is ahead.

He has decent but not great lateral movement but will be an excellent inside runner between the tackles showing great size, strength, and power. He has a tremendous heart with a work ethic to match that will make him a favorite of his coaches.

For a big man, he’s more quick than fast but running the ball inside, if he gets to the line untouched, he’s going to bull his way for yardage. Conner has shown the ability to protect the quarterback in pass blocking and is an underrated receiver out of the backfield. It is something that he can improve upon as he gets more familiar with the offense.

Conner is a punisher while running inside between the tackles, he would be a tremendous fit for the Patriots offense. With a large stable of pass receiving backs, he’d be the bell cow at when the game needs to be closed out.

Conner can come in and contribute in a big way on Day1 as the “big back” with their offense. He’s slated to be available in second and third round range. If he is available when the Patriots are on the clock with the 72nd pick, then he’d be a great choice to bolster the running game. With the plethora of weapons already in place in the passing game, Conner would be an ideal choice to be the move-the-chains and to punch it in from inside the five-yard line. He’s a Patriots type of player, an inspirational, team captain that will fit seamlessly into the locker room with his teammates.