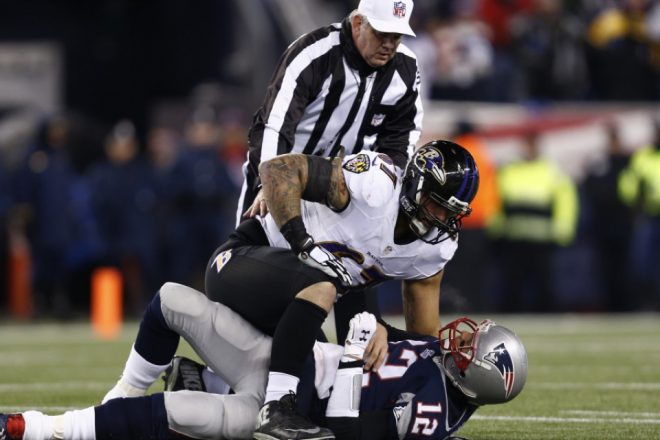 The Patriots, many are predicting will double-dip at the edge rusher position which may indeed be the case.  We’ve had multiple conversations on the podcasts about the edge and how they’ll approach it in the draft. But how they plan to use Lawrence Guy may have a bearing on those draft plans as well.

Guy has been kind of the under-the-radar signing that Bill Belichick has traditionally made during free agency. While the news of his signing wasn’t met with a ton of fanfare at the time in March, the four-year, $13.4 million-dollar contract certainly shows that they’re planning on using him in their system for the next several years.

The 6-foot-5, 300-pound defensive lineman has played in 67 games in his career, with 20 starts. He played in all 16 games for the Ravens in 2016 with 10 starts and played in 46 percent of the defensive snaps. He had a quarterback hit against Tom Brady on Monday Night Football last season. Guy had his most productive season in 2015 when he recorded 4.5 sacks and 46 tackles.

Unlike other players the Patriots have used in a kind of NASCAR-like package, Guy at 300 pounds isn’t an undersized guy but still has the athleticism to get after the quarterback. He’d provide them with plenty of versatility to play inside or outside. He’s not a space eater like Alan Branch but should be strong enough to hold up in the running game inside as well as push the pocket. At the age of 27, he’s just entering his prime as a player.

Guy’s former coach John Harbaugh thinks that the Patriots got a good player, and spoke highly of him at the league meetings last month.

“I just think they’re getting a great guy, and they’re going to love him because he’s a really good football player,” Harbaugh said. “He’s a very under-rated, under-valued player. I thought it was very Patriot-like to recognize his value and to pay him the way they did. I think they paid him very well and in a way that’s going to change his life forever so I’m really happy for him.”

“They’re going to get a guy that plays equally well against the run and the pass, plays super hard, will be excellent in the locker room and in the meeting room,” Harbaugh added.

So where will Guy play, on the edge or inside? Both probably and special teams as well. Because since the league has ruled that Shea McClellin’s leaping over the line is a [gasp!] safety issue, they’ll need more of an interior push to block field goals and extra points.

But in regards to the draft, while they’re about set in the interior with Branch, Malcom Brown, Vincent Valentine, Woodrow Hamilton, Darius Kilgo, and Guy, they will still be looking to add speed on the edge.

The Patriots have Trey Flowers, Rob Ninkovich, Kony Ealy and Geneo Grissom on the edge. Flowers will have big expectations this year after a strong second half of the 2016 season. Ninkovich has always been a solid big-play contributor but at 33, is starting to slow down. Grissom was a special teamer. Ealy has the size and versatility to also play inside or outside on passing downs.

This gives Belichick and Matt Patricia plenty of options on the defense as they’ll be able to mix and match with a variety of fronts. At the end of April, they’ll look for a speed rusher in the draft. Of course, if the opportunity avails itself, another would be even better. One can never have enough talented ‘guys’ on the edge.

But as for Lawrence Guy, he’ll be one player to watch this spring/summer. He may be the ‘guy’ no one talks about in the spring, then will rave about what a great signing it was in December.

By: Ian Logue
Monday night's game in Arizona is obviously an important one for the New England Patriots, but it may end up being a critical one for…
9 hours ago