The Patriots are heading to Washington today to visit the White House, which we touched on yesterday.  However, they were busy on Tuesday and there’s a lot to get to, so here’s a quick look a today’s top stories:

Butler Signs His Tender – One of the biggest topics of the offseason has been the future of Malcolm Butler and on Tuesday, the restricted free agent went ahead and signed his $3.91 million tender.

Now the next phase of this saga will be, what will happen next?

After the veteran cornerback’s decision to sign his tender, the possibility is now there for New England to entertain offers to make a move to trade him to another team.  That possibility didn’t really exist before because the Patriots couldn’t trade someone who isn’t under contract, bit it eventually became clear that Butler wasn’t going to get an offer sheet from another team.

One possible trade partner could be the Saints, who have already showed strong interest for his services.  Butler met with them last month but never received an offer sheet, most likely because it would have cost New Orleans their 11th overall selection, which head coach Sean Payton said was never going to happen.

“Currently it’s my understanding that he hasn’t signed his tender,” Payton said at the Annual League Meeting last month via NFL.com. “We can sign him to an offer sheet, but I don’t think we’re going to do that and give up the 11th pick. In fact, I know we won’t do that. So it is what it is right now.”

Things had quieted since then, and whether or not things will heat up now remains to be seen.  The other possibility would be to see Butler play another season in New England before either hitting the free agent market after the 2017 campaign, or getting the extension he’s long been coveting here to keep him in a Patriots uniform.

The latter two scenarios are certainly the more preferable for most fans who would love to see him paired up with newcomer Stephon Gilmore in what would most definitely be an incredibly impressive tandem.  But with the draft fast approaching and the team without early round selections, Butler would be a player who could add some currency for New England from another team looking for talent in their secondary.

It would have to be the right deal for both sides, and Bill Belichick likely won’t let a player as talented as Butler leave unless it’s for an offer he can’t refuse.

For now, Butler has already made the first step in the right direction after Tom Curran reported he’ll be in town this week.  Whether or not he’ll be putting in the work for his current team remains the biggest question, and equally the biggest topic of discussion until it’s eventually resolved one way or another. 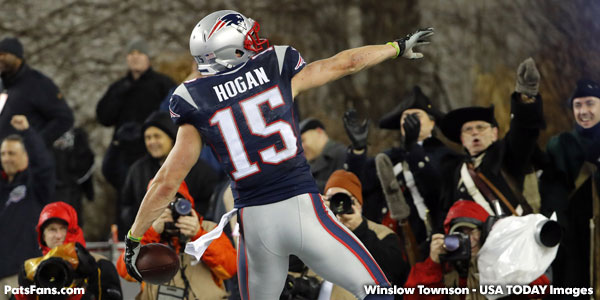 The Patriots stole away Chris Hogan in 2016.

Hernandez Found Dead in Apparent Suicide – His name hasn’t been mentioned here since being charged with murder several years ago, but it looks like former Patriots tight end, Aaron Hernandez, has seen his story has come to a shocking end.

According to a statement released by Massachusetts prison officials, the 27-year old was found in his cell shortly after 3 a.m. hung by a bed sheet that he had attached to his window, and had also jammed his door with “various items”.

This comes just days after he had been acquitted on two murder charges and his attorney had appeared on WEEI feeling very confident he would be able to overturn the original conviction that had the former tight end serving a life sentence.

His death comes on the same day the Patriots will visit the White House, with spokesperson Stacey James telling ESPN, “We are aware of the reports, but I don’t anticipate that we will be commenting today.”

Patriots Trying to Steal Another Bills Player – If you’re the Bills, you’re definitely not a fan of  Bill Belichick these days.

New England hasn’t been bashful when it’s come to poaching talent from other teams, but it has to be driving the Buffalo front office (and their fans) crazy  after what transpired Tuesday.

One year removed from having Chris Hogan stolen away thanks to an offer sheet they couldn’t match, the Bills are on the verge of it happening yet again after New England presented an offer sheet to running back Mike Gillislee.  According to ESPN, the deal is reportedly for two years and is worth $6.4 million.

The deal includes $4 million for 2017, which puts pressure on an already salary-cap-strapped Bills team who currently sits with just $10.8 million in cap room.  However, according to Mike Rodak of ESPN, matching the deal would reduce the Bills’ cap space by about $2.2 million, since $1.797 is already taken up by his existing restricted free-agent tender.

He had a strong season for Buffalo in 2016, with Rodak pointing out that he finished as one of the league’s most efficient rushers in 2016.

On 101 carries, Gillislee led running backs with a qualifying amount of carries in yards per carry, first down rate per rush, touchdown rate per rush and third-down rushing conversion rate.

Rodak also points out that the Bills caught a lot of heat last offseason for assigning the original round tender on Hogan (who was an undrafted free agent), which saw Buffalo get nothing in return after losing him.  Gillislee is a former 5th round pick, which given how he’s played, has left Rodak wondering why the Bills didn’t learn their lesson and place a second-round tender on the talented running back.

Unfortunately now they run the risk of seeing them lose another talented player to a team who has continued to be a thorn in their side.  They now have five days to decide if they’re going to let it happen yet again.

Patriots Waive Jackson, Lengel Signs – The team announced on Tuesday a couple of transactions, which include two on the offensive side of the football.

Lengel played in six games for New England in 2016 after the team signed him off Cincinnati’s practice squad last season, catching two passes for 22-yards including a touchdown.

As for Jackson, he fell victim to the success of both Joe Thuney and Shaq Mason, with Thuney having become a solid starter for New England’s revamped offensive line.  The former 3rd round pick out of NC State played in all 16 games for the team last season and played well during each of New England’s postseason victories.

Jackson was a former fourth round pick of the Patriots back in 2015 and started in nine games as rookie, but he couldn’t carry that success into 2016 after a knee injury saw him end up on PUP and he never saw the field.

The fact he was released this early in the process is a credit to Belichick, who released Jackson early enough in the process to find another club to get acclimated during OTAs, etc. 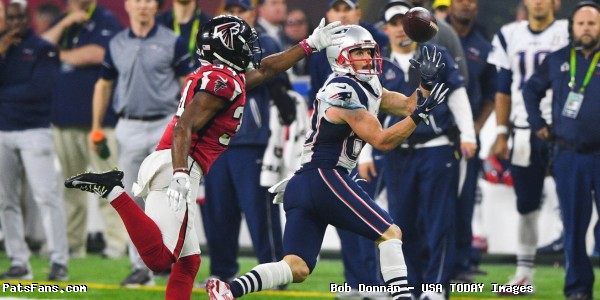 Amendola has been a key player for the Patriots.

Amendola Restructures – Danny Amendola has shown his continued willingness to do what he can to remain in New England, and on Tuesday he did it yet again after reportedly restructuring his contract.

ESPN’s Field Yates reports the veteran took yet another pay cut, lowering his salary from the nearly $6 million he was scheduled to make this season.

Yates reports that his deal will be worth around $1.6 million this season, which is a slight increase over the $1.25 million base salary he earned last season.

This marks the third restructure by Amendola, and the third in as many years.  He originally signed a 5-year deal back in 2013 that was worth up to $31 million following the departure of Wes Welker.

While Amendola hasn’t turned into the team’s number one receiver, he’s been absolutely critical to the team’s two championship runs, making key receptions down the stretch, as well as scoring a fourth-quarter touchdown in each of their Super Bowl victories.  In fact, Tom Brady has missed just five of the 18 passes he’s thrown Amendola’s way in each championship victory, finishing 13-of-18 (72%) including 5-of-7 against Seattle (1TD), and 8-of-11 against Atlanta (1TD).

Given what he’s already done, the fact he’ll be around for another year has to be music to the ears of Patriots fans hoping to see the club win back-to-back titles.

White Extended – After seeing James White emerge as a big part of their offense, it looks like New England took a step to make sure he’s around for the foreseeable future.

According to ESPN’s Adam Schefter, the team has reportedly reached an agreement on a 3-year extension, tying him up for the next four seasons.

While terms of the deal have yet to be disclosed, White was scheduled to make approximately $690,000 this season, so it will be interesting to see what type of deal he received.

Whatever it is, it’s certainly well-deserved.  He came up big in the Super Bowl against Atlanta, including catching 14-of-16 for 110-yards and a touchdown.  He also rushed for two touchdowns, including the game-winning score in overtime to win the team’s fifth championship.

He’s emerged as a solid weapon and seeing him locked up is definitely a solid move for a team that has been getting stronger during this offseason.  Getting a deal done with White now takes away any uncertainty over his future, giving the Patriots a talented player who they can enjoy knowing they have under contract for years to come.