6 years ago at 9:47 am ET
Follow @IanLogue
Posted Under: Patriots Commentary 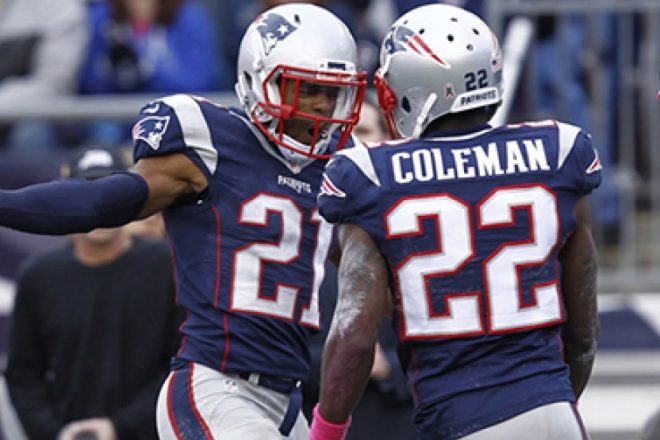 Anyone who has followed the Patriots over the last decade, there’s one thing we’ve learned when it’s come to finding reliable cornerbacks in Bill Belichick’s defense. It’s been a problem, and given all the discussions over the last week of jettisoning Malcolm Butler from the roster, it should definitely be something this team doesn’t do unless they’re being adequately compensated.

Some people are making the argument that the deal for Butler is simply a continuation of the trade involving receiver Brandin Cooks, which saw New England send the #32 overall selection in the first round, along with swapping selections in the 3rd and 4th rounds with New Orleans in exchange for adding Cooks to the roster.  But with time having passed since this escalated last week, the Saints need to realize that the value Butler brings in what is now a passing league is a valuable asset, and it should cost them a little more than they might have thought to get him.

Bill Belichick and Sean Payton may be friends but at the end of the day, both coaches understand that they’re each judged by wins and losses, and whatever deal they make needs to work well for both sides.  The Saints played hardball when it came to wanting more than just the Patriots #32 in order to feel fairly compensated for giving up Cooks, and you could make the argument that Butler is the equivalent in this trade and is certainly worth more than the rumored #32 selection that’s been speculated as currency to add Butler to their defense.

As for Butler, who is frustrated and has been working with his agent to orchestrate a deal out of New England, he has virtually no say in the matter.  He’s already been tendered at the first-round level for his restricted free agent contract, which would bump his salary up to $3.91 million and has New England in control of him for at least one more season.  As it stands right now, his current obligation is to suit up in Foxboro in 2017 before he’ll have an opportunity to take his talents elsewhere after the season.  While he hasn’t yet signed his tender, there will eventually come a deadline that will give the Patriots the right to reduce his salary if he doesn’t, much in the same way that it happened with Logan Mankins back in 2010 during a similar standoff.

Mankins didn’t care and his salary was cut, and he held out until the very end before he eventually signed the tender reported on November 7th just before the Browns game that season, which at the time was likely only done because it would have cost him the opportunity to become a free agent when the season ended.  The Patriots eventually reached an agreement on an extension for the veteran guard after they placed the franchise tag on him the following season, which put that situation to bed.

While Butler has said he won’t hold out, this whole mess still has a long way to play out should this deal with the Saints fall apart and the two sides, for now, seem too far apart to find common ground.

Make no mistake, Butler is one of the top corners of the game, having bucked the history here in New England of not enduring a second or third season slump that past players like Leigh Bodden, Devin McCourty, Kyle Arrington, Darius Butler, among others, each went through and caused a ripple effect in their secondary.  This is a football team that had gone through a rough stretch developing cornerbacks and it wasn’t until recently that they finally had some success after what we’ve seen from Butler, along with the recently departed Logan Ryan.

As a result, they had been forced to overcome that by relying on signing free agents, with Aqib Talib and Darrelle Revis being two keys to their recent run of success.  But that’s a formula that only goes so far and it’s no secret that the money they saved during Butler’s rise to becoming a restricted free agent helped pave the way for other personnel deals that also played a factor in winning their most recent championship.

To let him go doesn’t make a lot of sense unless the deal is just too good to pass up.  While they may have gone out and signed Stephon Gilmore, having already lost Ryan to free agency, the cornerback position remains one that is still going to require depth and there’s no guarantee that Gilmore is going to hit the ground running and match Butler’s level of play.  Not to mention the fact Gilmore has only played in 16 full games just once during his NFL career (2012), unlike Butler who has played in all 16 over each of the last two seasons.

Belichick may have a plan in mind but he’s likely aware of the painstakingly frustrating stretch he went through before the Patriots finally got their secondary in order and started getting more consistent play from the group they’ve built over the past few seasons.  With Ryan now in Tennessee and Butler’s future in question, Belichick should make sure that as much as he’d like to help his friend Sean Payton out, he needs to make sure that New Orleans coughs up at least the #11 selection, or he’ll simply start planning on the prospect of having both Butler and Gilmore lining up opposite each other for 2017.

Simply put, the Patriots are in the driver’s seat here and need to be smart.  Giving him away unless the deal is too sweet to turn down only benefits New Orleans, and the Patriots were more than fair by including another pick with the #32 pick when they acquired Cooks.  As great as that acquisition was, New England was already stacked with talent at receiver before making that deal and unfortunately, they don’t have that luxury right now at the cornerback position.

As a result, there’s really no room to do anyone any favors.  Now it’s just up to Belichick to take a tough stance and make sure the Patriots receive more than what they deserve in return for what they’d lose by not having Butler on the team next season.

By: Robert Alvarez
Devin McCourty will appear in his 200th career NFL game on Thursday night against the Buffalo Bills, Robert Kraft honors his milestone.
8 mins ago

By: Robert Alvarez
Robert Kraft lends the Patriots team plane to the University of Virginia so its players can attend the funerals of fallen teammates.
37 mins ago