Patriots Open the Preseason Against Jacksonville – The exhibition season will kick off a little differently this season, with New England squaring off against the Jaguars as they start getting ready for the 2017 season.

According to the schedule released by the team on Monday, it will be the Jaguars visiting Foxboro in Week 1 of the preseason, followed by back-to-back road games in Houston and Detroit.

They’ll close the preseason at home against the Giants, because, of course, every Patriots fan enjoys having that team shoved in our faces before the start of every season.

One question that will be interesting will be who the Patriots might hold joint practices with.  The Texans and Lions would seem to make the most sense given the ties between the two clubs, although Belichick being able to get some work in at home during the Week 1 meeting against Jacksonville. It might also be a welcomed opportunity for first-year Jaguars head coach Doug Marrone as he looks to turn around a franchise that is in dire need of finally taking a step forward, and the prospect of getting a closer look at how New England operates certainly couldn’t hurt.

Speaking of Jacksonville, Monday’s news has already sparked discussions down in Northeast Florida about how it will be an early barometer of where the Jaguars are in comparison to the defending Super Bowl Champions.  According to ESPN’s Michael DiRocco, the biggest thing on the minds of Jaguars fans will also be seeing whether or not the offseason work that quarterback Blake Bortles has put in during his time at the 3DQB facility in California will translate into better mechanics, or if he’ll just revert back to his old habits during game action.

Meanwhile, one thing that may become a sore point this season might end up being the media covering the Patriots scrutinizing the play of both Tom Brady and Jimmy Garoppolo as the 40-year old Brady will likely be analyzed all season long for those who are anxiously awaiting the drop off they’ve been expecting.  After all, what better way is there to predict that than by over-analyzing preseason football?  You can bet we’ll likely find out what we’re in for this season, and don’t be surprised if some of that talk begins to surface should Garoppolo put up big numbers against their opponent’s second (or third)-stringers over the course of those four meaningless games. 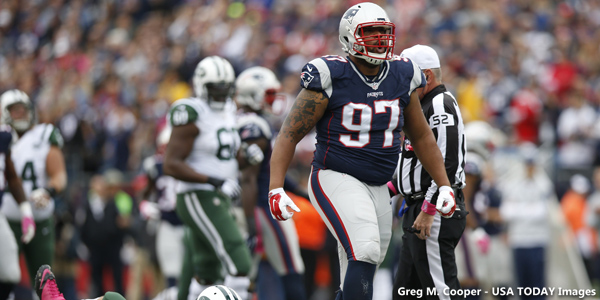 Alan Branch is back in the fold, which is good news for the Patriots’ defense.

Branch & Fleming Officially Back in the Fold – The Patriots announced two important signings on Monday, with both players being key members of the team on each side of the ball.

Both defensive tackle Alan Branch and offensive lineman Cameron Fleming are back in the mix, which is good news for a Patriots team who now heads into 2017 with two solid players anchoring important positions as New England gets set to try to repeat as champions.

Branch’s signing stands out, especially considering how effective he was down the stretch after quietly emerging as one of the Patriots’ most important players on their defensive line.  He’s been that way since he got here, amassing 96 tackles, 2.5 sacks and three forced fumbles through 39 games as a Patriot.

Terms of the deal were not disclosed, but CSNNE’s MIke Giardi reported last month that the two sides were working toward a possible 2-year extension.

As for Fleming, the restricted free agent was part of a much improved offensive line in 2016, with Fleming having appeared in all 16 regular season games last season, including five starts.  He was also a part of each of New England’s three postseason wins, with Cameron also playing four snaps at tackle and three on special teams during the Patriots historical Super Bowl victory over Atlanta.

Lynch Interested in Playing in New England? – Jeff Howe of the Boston Herald had one of the more interesting reports on Monday, with Howe reporting that Marshawn Lynch has an interest in playing for the Patriots in the event things don’t work out with the Raiders.

Oakland/Las Vegas reportedly appear to be the front-runners for his services, but according to Howe if things don’t work out, Lynch would be open to coming to New England.

Marshawn Lynch update: He has privately expressed interest in playing for Patriots if talks break off with Raiders. Keep an eye on that.

Lynch sat out all of 2016 and at this point Seattle still controls his rights.  For the veteran running back to have a chance to play elsewhere, he would have to unretire and then hope the Seahawks either release him or trade him to his potential landing spot.

Sending him to New England would be an interesting move, especially being as it was the Patriots keeping him out of the end zone before Malcolm Butler made history that began a run of tough luck for Lynch.   His final season saw him battle a rough run of injuries, and the Seahawks gave his carries to rookie Thomas Rawls.

As a result, one year after leading the league in touchdowns and being inches away from winning his second championship, Lynch tweeted a photo of his cleats hanging from telephone wires, which was essentially him telling the world about his retirement decision.

However, those hoping to see Lynch land in New England need to understand that it will require the Raiders to botch this up as the 30-year old grew up in Oakland and has incredibly strong ties to the area.

In an interview with Sports Illustrated last year, Lynch talked about where he grew up and the park where he and his friends would get together and play.  It’s the home that’s part of his history, and you can tell it’s still a place that’s close to his heart.

“We’ll start from the ground. When you look on the ground, you might see some needles,” said Lynch in his interview of the playground his friends spent time together growing up in a rough neighborhood.   “You might see some Pyrex [the cookware commonly used for making crack cocaine]—you know what I’m sayin’, Dawg? There was a lotta drugs. And if you lift your head up and open your eyes, you might see a prostitute walkin’. . . . What I would call real life, man. It wasn’t no bells and whistles.”

Lynch admitted that the area has changed quite a bit but all people need is a chance.

“I don’t have no problem with the change,” referring to how it’s tough to recognize where he grew up. “Just give Oakland people—real Oakland people—our opportunity. Why not?”

Needless to say, the odds seem to favor Lynch lining up behind Derek Carr in 2017 and not Tom Brady.  Nevertheless, it’s yet another interesting storyline to an offseason that has been anything other than boring. 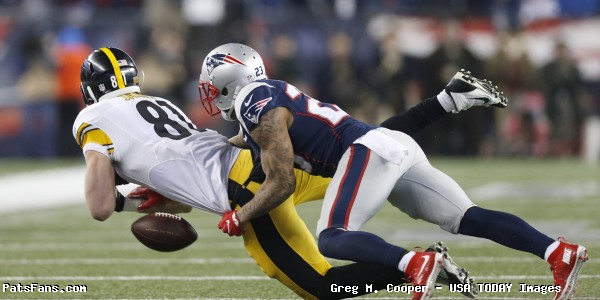 Chung was among players punished by the league.

Chung Among Players Fined in Arm-Wrestling-Gate – The NFL continues to become more hypocritical and Monday’s news that Patrick Chung will be fined for his participation in the Pro Football Arm Wrestling Championship last week at the MGM Grand Hotel & Casino in Las Vegas is just ridiculous.

Chung was among 30 current and former players who took part in the 3-day tournament, where the winners in the championship would have been presented with a fund from which those players could have made donations to a charity of their choice.

Instead, the league, which will soon feature a franchise in a city where gambling is legal and slot machines are everywhere including the airport, is punishing the players due to their policy which strictly prohibits players from taking part in promotional events at casinos.

The fact they continue to enforce this policy and are doing so in a manner that also prevents charitable actions is a little bizarre, especially considering what a franchise full of players will soon find themselves up against.  They’re going to be very limited in terms of marketing opportunities in the local community, especially given that unlike in New England, or elsewhere for that matter where gambling tends to be quite limited, escaping a slot machine in most well-known event places in Vegas is nearly impossible.

There’s no doubt that the league has to be wary of gambling interfering with the “integrity” of the game, but the blanket policy prohibiting events like this in Las Vegas are likely going to become a problem down the road given the investment the city is about to put up to make an NFL franchise a reality there.

Obviously there’s no easy answer but it’s safe to say an Arm Wrestling Event for charity shouldn’t be among the bylaws for a league that should have been appreciating the positive publicity it would have received.

The bigger issue here might have been potential injuries by the players who participated, which could have been a problem for the teams who may or may not have sanctioned that player taking part in the event.  That seemingly would have been a bigger issue, yet the threat of a potential arm/shoulder injury surprisingly was never mentioned in this story.

Instead it’s a reminder that the fine lines within the NFL’s policies remain blurry, and given what lies ahead, one would have to believe there will certainly be more frustrating situations like this one in still to come in the future.