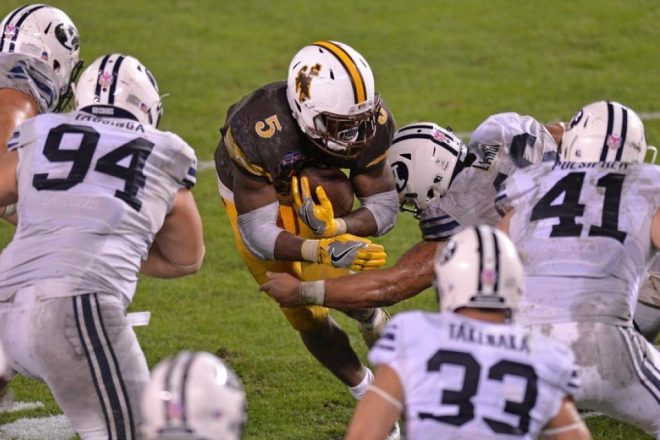 Dark Horse, Late Round Pick May Turn Some Heads

Brian Hill from Wyoming is a big, running back who can shoulder a heavy load. In 2016 he carried the ball 349 times for 1,860 yards, (ranked third in the FBS) 5.3-yard average, and 22 touchdowns (fourth) in 14 games on his way to first-team All-Mountain West honors. He added eight catches for 67 yards out of the backfield.

Hill has been productive, albeit against lesser competition but has compiled nearly 3500 yards in his last two seasons at Wyoming. He has good vision and will make the correct call in picking the hole and following his blockers.

He possesses nice cutback moves but doesn’t run with enough power for a man his size. He also needs work in pass protection. He has good hands but was rarely used in the passing game.

– Works well between the tackles

– Has some nice moves to make tacklers miss

– Good hands although not used much in the passing game

– Not explosive and needs more strength

– Not a breakaway threat

What his Role Will Be:
Hill’s role will be as the Patriots big, physical, move-the-pile back. He’d take over the Blount role, especially as short yardage, goal line back

Will his Role Change from Year 1-2?
Yes, he’ll need to get stronger and run with more power. With some work on his pass blocking skills and a bit as a receiver, he could push for a bigger role.

What Current Player on the Roster Will He Replace?
LaGarrette Blount, and Brandon Bolden.

What is his ST Value?
Minimal

Conclusion:
Hill is one of those players that will generate widely varying scouting reports. While many scouts point to his lack of explosiveness and power running, there can be no arguing with his production the past two years.

He’s the kind of player that grows on you the more you watch his tape. He’s adept at squeezing into tight gaps, has the size (6’1,219) that will make him an attractive target in the power running game.

With the Patriots offense, he won’t be counted on to put the kind of workload on that he’s done with the Cowboys, with 349 carries in 2016. He could become a nice rotational back in New England arsenal. He has the size to be a good, serviceable power back in the NFL. He runs a bit too upright at times however and that is something that running back coach Ivan Fears would work on with him.

Hill has good vision and balance and will follow his blockers and pick the right gap to run to daylight. He’ an intriguing, dark horse prospect that could be a nice late round pick up.

If he’s around in Round 5 or Round 6, it will be an intriguing choice for the Patriots to make. If he played in the SEC or the Big 10, he may be looked upon as a much more touted prospect.