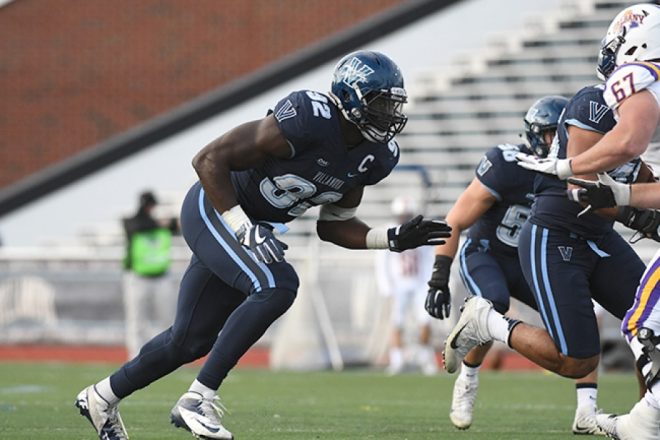 Big, Freaky Athletic Player is a Project But an Intriguing One

Edge rushers are like cornerbacks, you can never have too many good ones and the team is expecting Flowers to continue to improve on his 2016 season. Ealy has flashed and had an incredible Super Bowl with Carolina but hasn’t been able to do it consistently. The Patriots have plenty of options but as of today, they don’t pick until the third round.

Tanoh Kpassagnon from Villanova is a fantastic athlete with tremendous size and very long arms that can play on the edge. He may be the most intriguing ‘Nova prospect since Brian Westbrook to come out of All-Colonial Athletic Conference.

He was an All-American in 2016 with 21.5 tackles for loss and 11 sacks, 1 pass defensed, 1 forced fumble and two fumble recoveries. He shows on his tape that he has a very good short area burst, he changes direction well for a man his size and can block kicks in the STs.

Kpassagnon measured out a 6’7, 289 pounds at the Combine and has 35 5/8 arms which helps keep opposing offensive linemen away. His large frame can handle getting even larger, he could easily measure out at 300-305 with no loss of athleticism.

He showed that he could two-gap albeit at a lesser level of competition. He’s still a bit raw with his pass rush moves but flashes his potential with his freaky athleticism. He’s very intelligent and mature and is set to graduate with a double major of accounting and economics.

– Tremendous size, and length on the edge

– Impressive burst off the snap

– At times plays too upright

– Played at a lesser level of competition

– Needs to get stronger at the NFL level

What his Role Will Be:
Kpassagnon’s role would be to be a part of the rotation outside for the Patriots defensive line. He’d project initially as a sub-package pass rusher to add depth and fresh legs to the Patriots pressure on the QB. But with some coaching, he could find himself pushing for more reps and possibly kick inside as an interior pass rusher.

Will his Role Change from Year 1-2?
Yes, with improved ability to set the edge in the running game, some strength added in the weight room and being coached up, he could develop into an impressive pass rusher.

What Current Player on the Roster Will He Replace?
He’ll try to challenge Ninkovich and Ealy for reps in the sub packages. But he will look to replace Geneo Grissom on the roster

What is his ST Value?
Limited to field goal and extra point blocking units for now.

Conclusion:
Kpassagnon is an intriguing project. He has tremendous size and length coming off of the edge. But he’s still raw and will take some time to develop to reach his full potential. He’d primarily be a third down specialist and play STs in his rookie year and gradually work his way into the rotation.

He’ll need to get a bit stronger and could possibly pack on another 10-15 pounds of muscle on his frame before he can take on the tackles in the NFL. But his arrow is moving upward, this is a guy who is just scratching the surface of his potential.

Once he works out his issues with his balance and plays under control, Kpassagnon could be this classes version of Jason Pierre-Paul. He has good lateral quickness and has shown the ability to be a disruptor in the backfield. He got off to a slow start in his college career and he’s not yet reached his ceiling.

Kpassagnon should around in the 4th round of the draft. If he’s there, the Patriots would have the option of picking him up. He could become part of the rotation on the edge and even provide a big interior pass rusher on obvious passing downs. Whatever team drafts him will have to be patient, however, it will some time to see what he can really do.