5 years ago at 5:00 am ET
Follow @SteveB7SFG
Posted Under: NFL Commentary

If you haven’t checked out the Tom Brady interview with Peter King, you really should. It was excellent and despite many having sore feelings for King since Deflategate, it is well worth the time.

We here at PatsFans.com would like to wish the best of luck to Chris Price whose contract expired at WEEI and won’t be brought back. With money getting tight all over the journalism field, Price was a victim of the salary cap in a hard-hit field.  Chris has always been a good friend to us here and is one of the really, good guys on the beat. And he’s a helluva writer as well.

Daboll will replace Steve Sarkisian on Nick Saban’s staff. Sarkisian left for the Atlanta Falcons OC position and only held the job for one game, replacing Lane Kiffin who announced that he was leaving for another head coaching job.

Daboll has been a coach in the NFL for 17 years, the last four with the Patriots. He was rumored to be the replacement for Josh McDaniels as the Patriots OC if McDaniels had taken another head coaching position this year.

With the Bill Belichick-Nick Saban connection in place, it could place Daboll in even a better position to become the Patriots OC if McDaniels leaves in the future. Right now, it opens a spot on the coaching staff and rumors are that the Patriots could bring in Chip Kelly in some capacity. Or Belichick could opt to promote from within as he’s done in the past. This will bear watching in the future.

Garoppolo Trade Rumors Swirl Both Ways:
Will the Patriots trade Jimmy Garoppolo this spring? Depending on who you ask, you’ll likely get very different answers.

ESPN’s Adam Schefter appeared on Mike and Mike this week and had this to say about the situation. “There are enough teams out there with a need at the quarterback position, and there just aren’t a lot of quarterbacks out there that … I think there will be calls,” Schefter said. “And it’ll be up to some team to convince the Patriots to offer enough to want to part ways with him.”

But the networks’ Ed Werder stated this week, his sources inside the Patriots tell him that the team won’t be trading Jimmy G. this spring. Our own Russ Goldman wrote his own take this week stating that the Patriots should hold on to him.

Regardless of what anyone is saying, the Patriots have no compulsion to trading Jimmy G. this spring. They hold all the cards, he’s under contract for 2017, they have three QBs that they feel comfortable with and with a weak QB class in the 2017 NFL Draft, it will be up to interested teams to pry him away from the Pats. Charlie Casserly of NFL.com calls him a better QB than any other player coming out this spring.

Peppers, McCaffery Lead Polling in Pats first Draft Pick:
With the offseason among us, the mock drafts are already beginning to make their way onto mainstream media sites. It is always difficult to judge where the Patriots are going target because they so often go against the grain. It becomes doubly difficult before free agency begins because many holes could be filled there.

However, many of the national pundits have the Patriots selecting either S Jabril Peppers from Michigan or Stanford RB Christian McCaffrey with the 32nd pick in the NFL Draft. We’ll respectfully disagree at the time.

The feeling here is Peppers goes a bit earlier than that and the Patriots normally don’t value a running back in the first round, they wait until the middle rounds. McCaffrey isn’t the biggest back either at 197 pounds although he’d be a nice fit in the offense because of his versatility.

Two names to keep an eye on as the draft approaches is UConn S Obi Melifonwu and BYU RB Jamaal Williams. Melifonwu is 6’4, 220 pounds and is an athletic freak. With Duron Harmon a free agent and Pat Chung getting up there in age, he’d be a great fit. Williams would be a middle-round steal and at 6’0, 220-pounds he is a north-south runner who will fit in perfectly with the Patriots rotation.

Chris Long Strikes Back at NFL Fans For Saying He’ll Skip White House:
So far, six members of the Patriots have stated publicly that they’ll skip an invitation to the White House if President Trump does in fact, issue a call to the Pats for winning Super Bowl LI.

Feelings are strong on both sides, however after an open letter by the New York Daily News, Long, had enough. He took to Twitter and stated that he “didn’t an open letter explaining my own words to me.”

He then posted a series of messages after posting this message: “Heard it all this week … if you don’t want to hear about some of the dumb s–t I’ve heard … mute away, but it’s good. Rapid fire time, yeah?” 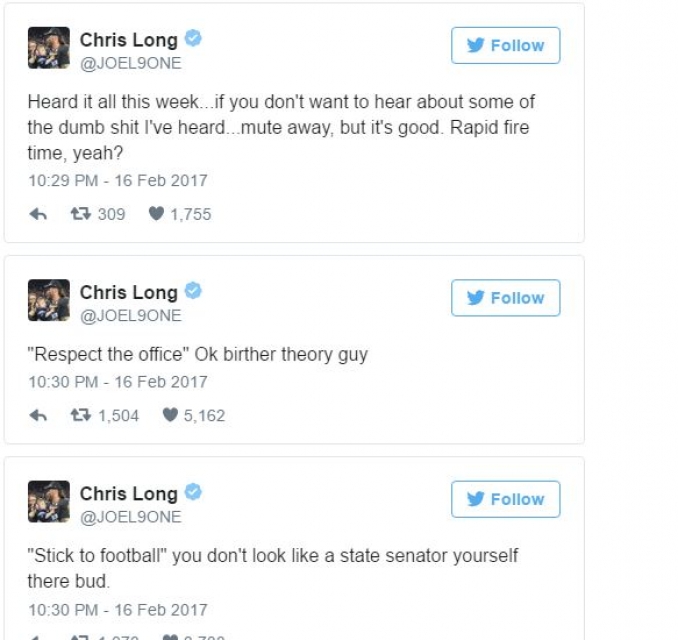 Myers was a 6th round draft choice out of Miami in 2001 for the Patriots and was a member of the 2001 Super Bowl winning team. He was invited back to celebrate the team’s 15th anniversary by owner Robert Kraft in December, but couldn’t attend due to his illness.

Myers also spent time with the Lions, Saints, Jets, and the Ottawa Renegades of the CFL.

Michael Floyd Begins 24-day Jail Term For DUI:
Patriots receiver Michael Floyd pled guilty to extreme DUI in Arizona and received a sentence of 120 days in jail with 24 active and 96 under house arrest. Floyd will also receive a fine of $5,000 and must perform 30 hours of community service as well as pass additional alcohol screenings in the future.

The Cardinals released Floyd after his arrest where he was found asleep at the wheel of his running car at a stoplight in Scottsdale, Arizona. The Patriots claimed him off waivers shortly after that.

Floyd who is a free agent, still faces additional punishment from the NFL and much of it unfortunately, will depend on whose uniform he’s wearing this summer.

Bill Belichick to Narrate WWII Documentary:
Chalk this one up to must-see TV. Anyone who has ever watched one of Bill Belichick’s press conferences knows what a history buff and his intense pride in the US Armed Services, specifically the US Navy and the Naval Academy where he spent the formative years of his childhood.

So, it is a perfect fit for Belichick to lend his voice to the narration of an upcoming documentary, D-Day over Normandy, a project funded by the World War II Foundation, of which Belichick is admittedly very proud of.

“Every day of my childhood, I was immersed in the tradition of the United States Navy. I was, and remain, inspired by their discipline, teamwork, and courage, especially the sailors who fought on D-Day and in the Pacific theater, where the U.S. Pacific Fleet sacrificed so much for ultimate victory.

“The Navy, Army, Air Force and Marines made one heck of a team in World War II.”

This should be a very intriguing project and one that will be on every Patriots fans’ radar once it is completed.

Bills May Look to Safety with #10 Pick:
Two of the bigger needs for the Buffalo Bills this offseason are WR and Safety. Their returning WRs are largely unproven after Sammie Watkins. However, some of the mock drafts have Buffalo targeting LSU Safety Jamal Adams with their #10 pick in the draft.

Adams was the nation’s’ top-ranked safety in 2016 and is versatile, offering excellent support in the running game and can play multiple coverages as well.

Miami Releases Mario Williams After One Season:
This move comes as one that was expected. One year after Buffalo released Mario Williams as a salary cap casualty in 2016, the Miami Dolphins released Williams this week after a disappointing season with the Fins.

Williams signed a big, 2-year, $17 million-dollar contract with Miami last offseason and was a bust. He was benched for Cameron Wake who turned in a Pro Bowl season. Williams notched just 13 tackles and 1.5 sacks in his only season in Miami.

ESPN posted the following on the incident:

The incident in question occurred at 2:43 a.m. ET Sunday on Pittsburgh’s popular South Side. Two men, ages 21 and 22, told police that Revis punched them amid a verbal altercation. Witnesses said the two men were unconscious for 10 minutes, according to police.

Dallas Cousins, a 22-year-old from Kittanning, Pennsylvania, was walking on a street when he spotted someone who resembled Revis, police said. Cousins confronted Revis, who acknowledged his identity. At that point, Cousins began recording video on his cell phone and continued to follow the NFL star.

“At some point, Revis snatched the cellphone away and attempted to delete the video,” the police statement said.

Zacheriah Jarvis, a 21-year-old from Ross Township, Pennsylvania, who is Cousins’ roommate, helped retrieve the phone, police said. An argument ensued. An unidentified man came to help Revis. The other two men told police they “were punched, then remember waking up to talk to police.”

There is obviously more to the story and eventually, the truth will come out. Revis’ attorney stated the two men were verbally harassing Revis prior to the incident.