5 years ago at 8:31 am ET
Follow @bob_george
Posted Under: Uncategorized 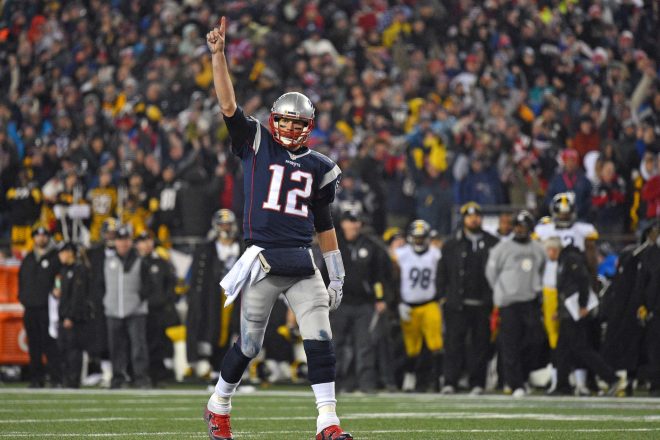 HOUSTON – “We’re not like Dallas, who looks to the north and the east for approval.” – former CBS News anchor Dan Rather, on his hometown of Houston, Texas

Well, Dan, here’s your north and your east, all in one.

The AFC Champion New England Patriots arrived Monday in Houston, one day after their NFC counterparts, the Atlanta Falcons.  The Patriots opted for as little media hoopla as possible, which will come at them loud and strong all week long now that they are here.  All week long, the Patriots will have to deal with DeflateGate, the Brady Revenge Tour, awkward moments on Sunday and Monday if the Patriots win and if Tom Brady wins MVP, anything but the most important issue, that being how the Patriots plan to slow down the Falcon offense.

What will be completely lost in the shuffle is that the Patriots do have Super Bowl history here in Houston, and it’s pretty good.

The last time the Patriots came here to decide the NFL Championship, Super Bowl XXXVIII, the Patriots won a thriller against the Carolina Panthers, 32-29.  Back then, the stadium had another name, Panther Nation had Jake Delhomme and not Cam Newton (and Jake would have been in there trying to recover that and any fumble), and Adam Vinatieri was nowhere near being the all-time leading scorer in Baltimore-Indianapolis Colts history.

February 1, 2004.  Back then, NRG Stadium was called Reliant Stadium.  The two teams battled it out in what initially was an unlikely defensive struggle.  The game set a record for going the longest time from the beginning of the game scoreless.  But a second quarter Mike Vrabel stripsack of Delhomme set off a 24-point outburst from both teams.  Tom Brady threw touchdown passes to Deion Branch and David Givens, but Delhomme hit Steve Smith with a bomb and Jon Kasay nailed a 50-yard field goal at the halftime buzzer.

After a scoreless third quarter, the teams went off on an offensive rampage which ranks right up there as one of the best quarters in Super Bowl history.  Both starting safeties for the Patriots, Eugene Wilson and Rodney Harrison would get injured and not finish the game.  Brady threw a touchdown pass to Vrabel, Antowain Smith rushed for a touchdown, but Delhomme matched Brady in every area except converting two-point conversions.  He hit Muhsin Muhammad for an 85-yard touchdown bomb that remains the longest TD pass in Super Bowl history, with Wilson injuring his groin on the play.

Inside two minutes to go, Delhomme threw a touchdown pass to Ricky Proehl to tie the game at 29-29 with 1:08 to go.  Oddly, that made it twice in a row that Proehl had caught a game-tying touchdown pass in a Super Bowl against the Patriots inside two minutes to go, as he had done the same thing two years ago as a member of the St. Louis Rams.  Brady had all three timeouts and those 68 seconds to try and pull off another last second rally in a Super Bowl.

Kasay helped Brady out by pushing the ensuing kickoff out of bounds, allowing Brady to begin at the 40.  He drove the Patriots to the Carolina 23 and called his last timeout with 8 seconds left.  Vinatieri, who had been 0 for 2 in attempted field goals up to that point, changed his plant foot shoe during halftime.  He walked out there and nailed a 41-yard field goal to put the Patriots back on top.  After covering the kickoff (remember Rod “He Hate Me” Smart?), the Patriots were Super Bowl champs for the second time in three years.

The Patriots return to Houston with the same quarterback and head coach from that game.  Both Brady and Bill Belichick will be gunning for their fifth Super Bowl win, which would be the most for either gentleman at their respective jobs.  The Patriots will already have set an NFL record by appearing in their ninth Super Bowl.  Winning the game will tie them with San Francisco for the second most victories all time, trailing only the team the Patriots vanquished last week to get to this game, the Steelers.

Houston is a nice city to go to for the Patriots in that the city is not a hot tourist destination, as opposed to New Orleans, Miami or San Diego.  There will be plenty of distractions out there, mostly surrounding DeflateGate and Roger Goodell.  At least the city itself won’t likely be a part of that.

Simply stated, you don’t go to Houston to “get away”.  You go there if you get a job offer.  You go there to visit family.  You make your home there and raise your family.  Galveston, 40 miles away, is your ocean access.  There actually is a “Port of Houston”.  But Houston isn’t a beach town by any means.

You’ll eat well there.  Steaks, Mexican cuisine, and back to the steaks again.  You’ll drink lots down there, but don’t look for the once famous Gilley’s in Pasadena, as it went the way of Lone Star Beer.  They don’t make Lone Star Beer anymore, and thankfully so.  You’ll find some watering hole down there, and maybe Willie Nelson sang there at some point in his career.

But you won’t be blown away with “must see” or “must do” places and events outside of the game itself.  You’ll meet lots of nice people there, with the “southern hospitality” frame of mind.  Despite some media types who think Boston is the be all, end all of party cities and anything south of New York City is a yahoo town (they’re still complaining about Jacksonville the year following the previous Houston trip), Houston is a nice city, especially this time of year when the summer heat and humidity aren’t a problem.

So if you’re going, relax.  Pull into George Bush Airport, head out to Beaumont or Victoria or College Station to your hotel (you’re lying if you say you got lodging in the Houston area), have a terrific meal and a few drinks and enjoy no snow and balmy weather.  And don’t complain that it’s not South Beach or Bourbon Street.  You’re there.  Have fun.

Worry only about Julio Jones, Matt Ryan, Devante Freeman and all those other guys the Patriots have to try and deal with.  Have a Super week, everyone.