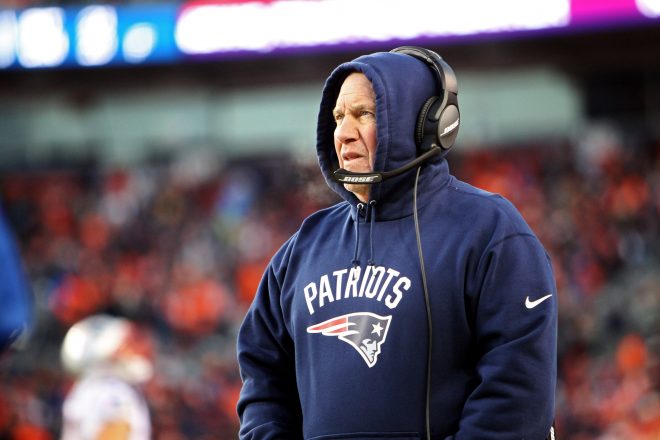 Every year, the plan remains the same for the Patriots.

Win the Division, try to get the number one seed and put themselves in a position for a deep playoff run.

On Sunday, the Patriots accomplished step one as they did something they couldn’t do last season, beating Denver on their field 16-3, which improved them to 12-2 on the season.  The victory keeps them firmly in the driver’s seat heading into the postseason for the top seed in the conference, and also locked up the AFC East title for an NFL record 8th straight season.

Players in the locker room were upbeat following the win, with newcomers like Chris Long and Martellus Bennett enjoying the experience of finding out what it’s like to win a division title.  Bennett told reporters that it’s been a terrific run, with the veteran saying, “I ain’t never won [expletive].”

With two games to go the Patriots have also locked up at least a first-round bye, with the goal now to secure the top seed to ensure they’ll be playing any postseason games at Gillette Stadium.  With the woeful Jets up next at home and a trip to Miami to play the Dolphins to follow, that opportunity is there for them if they’re able to win out, or if they can win and the Oakland Raiders falter down the stretch.

However, after a long season full of adversity, the first milestone was reached and Sunday’s victory gets them a little closer to putting themselves in the best position to succeed in the postseason.  They now have one less game to play after locking up a bye, which has been a part of the journey in each of their past championship runs.  But the journey is far from over, which Bill Belichick pointed out after the game.

“It’s a huge accomplishment,” said Belichick on winning the AFC East.  “It’s a lot of hard work going all the way back to the offseason program, OTAs, training camp, a lot of tough games, won a lot of games on the road, which is always hard to do, this is another one.”

They got their first hat and t-shirt, with the next set coming if they’re fortunate enough to win the Conference Championship.  Fortunately for New England, the road to Houston just got a little shorter, but there’s still a little more work ahead.  Belichick told reporters he’s happy for what his team has done so far, but now they’ll have to turn the page and stay focused on trying to take the next step as they look to win another championship.

“We still have more we can accomplish and our goals can now be reset,” said Belichick.  “But this is the first one, to win the Division and so that’s definitely something to be proud of, something we accomplished.”

“But now we can, as I said, we can reset and try to accomplish more this year.”