6 years ago at 8:37 am ET
Follow @SteveB7SFG
Posted Under: Patriots Commentary 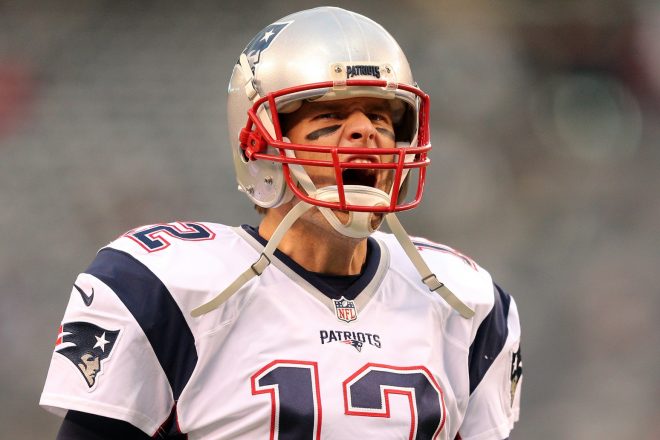 The Rams are sitting at 4-7, which is about the norm for the team under Jeff Fisher. In his fifth year, the team has never been better than 7-8-1 and 2016 seems earmarked for another below .500 finish. They’ll be starting rookie QB Jared Goff in just his third NFL start. Goff was the #1 pick in the 2016 NFL Draft.

The Patriots are 9-2 and are currently the top seed in the AFC. The win over the Jets was costly however, they lost TE Rob Gronkowski, possibly for the year with a back injury. Fellow TE Martellus Bennett suffered an ankle injury in the game as well and although hobbled was able to finish the game.

QB Tom Brady: Brady missed practice again this week and there’s no doubt his knee is hurting. Just watch him try to kneel at the end of the game on Sunday. But this week is special. With a win on Sunday Brady will stand alone with 201 career wins as a starting QB passing his former rival Peyton Manning.

While Brady is always quick to point out the team aspect of the game, his place in history is further cemented here and the moment will not be lost on him. He’ll have a bit of extra fire in his gut this week.

DL Vincent Valentine: With the Alan Branch suspension still looming for this week’s game, the big rookie defensive tackle will play a key role in the Patriots interior defensive line especially on running downs. While the league continues to drag its feet and no appeal date has yet been set, Branch will continue to play, but with each day that drags on, the Patriots run the risk of losing Branch for a post-season game.

The Rams haven’t had a good running game all season and average just 83.1 yards per game, just 29th in the league. But they also have the talented 2nd year running back Todd Gurley. Their struggles have had more to do with the play of the offensive line than their backs.

The Patriots are going to have to mix Valentine into the rotation more with Branch and Malcom Brown to prepare him for perhaps a starting role once the Branch suspension appeal has been resolved. With big games against the Ravens, Broncos, Jets and Dolphins looming, they’ll need him to be ready to play a big role, both figuratively and literally on defense.

Wide Receiver Malcolm Mitchell: The rookie wide receiver is breaking the mold that the Patriots can’t develop wide receivers. After catching a huge 56-yard touchdown against the 49ers two weeks ago, Mitchell followed that up with a two-touchdown performance against the Jets including the game-winner with just under two minutes to go.

The Boston Herald’s Jeff Howe reported this week that both of Mitchell’s touchdowns were against Darrelle Revis on Sunday. The first time in his career that anyone has scored two touchdowns against the future Hall of Famer.

Mitchell is quickly becoming a trusted, valued target in the Patriots offense. And it couldn’t come at a better time. With Gronkowski lost, possibly for the duration of the year, the Patriots will utilize a lot more of the three and four wide receiver sets.

With Julian Edelman and Danny Amendola handling the duties down low in the short passing game, it will be tasked to Mitchell and Chris Hogan to pick up more of the slack in the middle to deep passing routes. Brady has shown the will and the ability to go deep when teams are intent on taking away the short areas in the middle of the field. Mitchell can be a weapon to use in this realm, his size and athleticism being a plus.

Cornerback Malcolm Butler: The Patriots corner will be going against the Rams talented Kenny Britt or their deep threat Brian Quick on Sunday. With the rookie Goff under center, he’ll be looking to hit his veteran, go-to receivers to move the ball.

If the Patriots get off to a quick start, then the Rams will be thrust into a situation that doesn’t bode well. Getting into a shootout with a rookie QB that has little experience. Then the patience of taking what the defense gives will be tested. Butler will probably see a lot of deep routes this week.

After his worst game of the season against the Jets, Butler will be looking to bounce back. He’s very competitive and you know the members of the secondary hear all of the barbs thrown their way by the fans and the press. Here’s a chance at a bit of redemption.

Center David Andrews: Much of this week has dealt with the talk of the Rams big disruptor on the interior of their defensive line Aaron Donald. And it is well deserved. Donald is incredibly strong and athletic and can blow up running plays in the backfield as well as push the pocket and get after the QB.

More than anything, interior quarterback pressure is the toughest for Brady to deal with. When he gets pressure from the edge, he has the innate ability to step up and slide in the pocket. With pressure up the middle and in his face, he loses that ability as well as the chance to step into his throws. It also makes him more susceptible to edge pressure.

As we pointed out in our pregame matchups, Andrews will be the key player on the offensive line to take on Donald, especially in the passing game. The Rams have an excellent front four and each will be a tough matchup. But their best player is Donald and if the Patriots can neutralize him, then that will go a long way in being a successful day for the offense.