6 years ago at 8:34 am ET
Follow @SteveB7SFG
Posted Under: Patriots Film Room 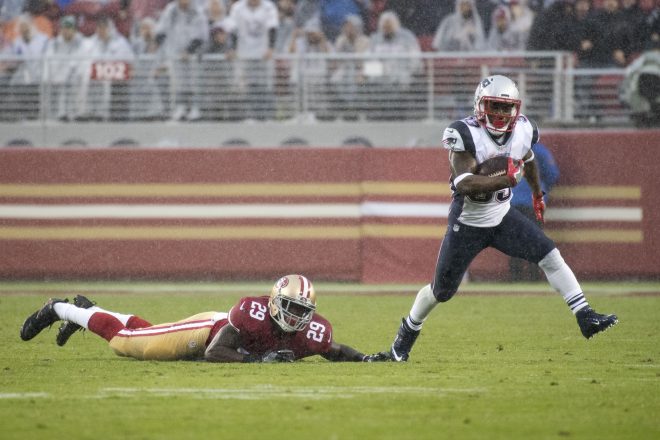 All-22 Film Shows Good and Bad in Several Key Areas

Reviewing the game film from Sunday’s win over the 49ers it is easy to find plenty of good and bad plays to highlight. Bill Belichick will have plenty of positives and negatives to work with within the upcoming week to prepare for the Jets.

The offense, missing two key players in Rob Gronkowski and Chris Hogan struggled in the middle point of the game, but still put up 30 points and could have easily put up over 40. Malcolm Mitchell had his best game as a pro and scored his first NFL touchdown, a 56-yard pass play from Tom Brady. The “Pony” backfield with both Dion Lewis and James White looks intriguing and gives Brady plenty of options to spread out the defense.

LeGarrette Blount and James Develin are working quite well together. Develin is opening some gaps as the fullback for him to run through and Blount is showing good patience and excellent vision in picking the holes to exploit.

The defense mixed and matched with several different combinations but it is obvious that when they rested Dont’a Hightower, the defense suffered. They did use him with different linebackers, starting Shea McClellin also using Elandon Roberts, Kyle Van Noy and even Barkevious Mingo near the end of the game. All of them had their ups and downs, but Van Noy flashed a nice inside move on the right tackle to pick up his first sack as a member of the Patriots. The Patriots manufactured five sacks by utilizing some different looks and it worked. They got two from DBs (Chung, Butler), two from LBs (Hightower, Van Noy) and one from the DL (Ninkovich), so it is a positive moving forward.

Logan Ryan had a nice bounce-back game in the slot this week. Eric Rowe got the start opposite of Malcolm Butler and played well. I would imagine that they’ll stick with this unit next week in the Meadowlands against the Jets.

We’ve picked out a couple of different plays this week and we’ll look at how the team did.

Dion Lewis 9-Yard Pass: What the Patriots have is an intriguing pair of pass catchers now in Dion Lewis, now that he’s back and James White who has played very well in his stead. So why not use them both? And they did with great effect here early in the game.

The Patriots had a third and about three just inside the 20-yard line. The line up with three wide receivers and Lewis on Brady’s left with White on his right in the backfield. This is a look the 49ers hadn’t seen on tape before so they’re unprepared for it. 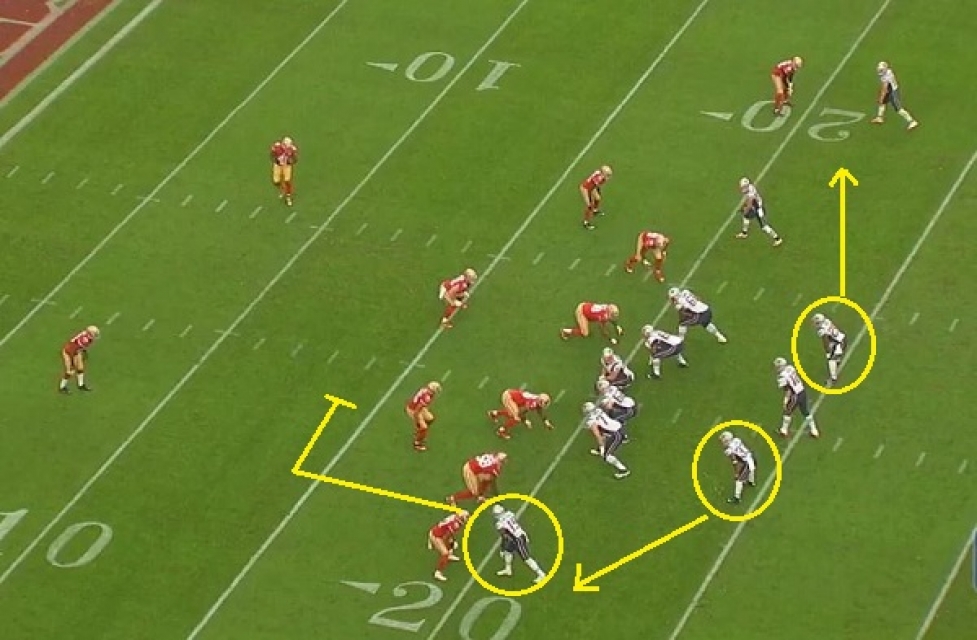 At the snap, Mitchell who is lined up wide left runs a seven-yard pattern inside and sits, dragging his coverage with him. Both Lewis and White run out into the flat at 45-degree angles. Brady has plenty of options.

The 49ers took a deep drop …too deep and Mitchell is wide open for an easy first down. Lewis is open in the left flat, where Brady delivers the ball and after he makes the first man miss, he runs for other 4-5 yards for a 9-yard gain. But White at the top of the screen is wide open and had only a single man to beat for the touchdown. 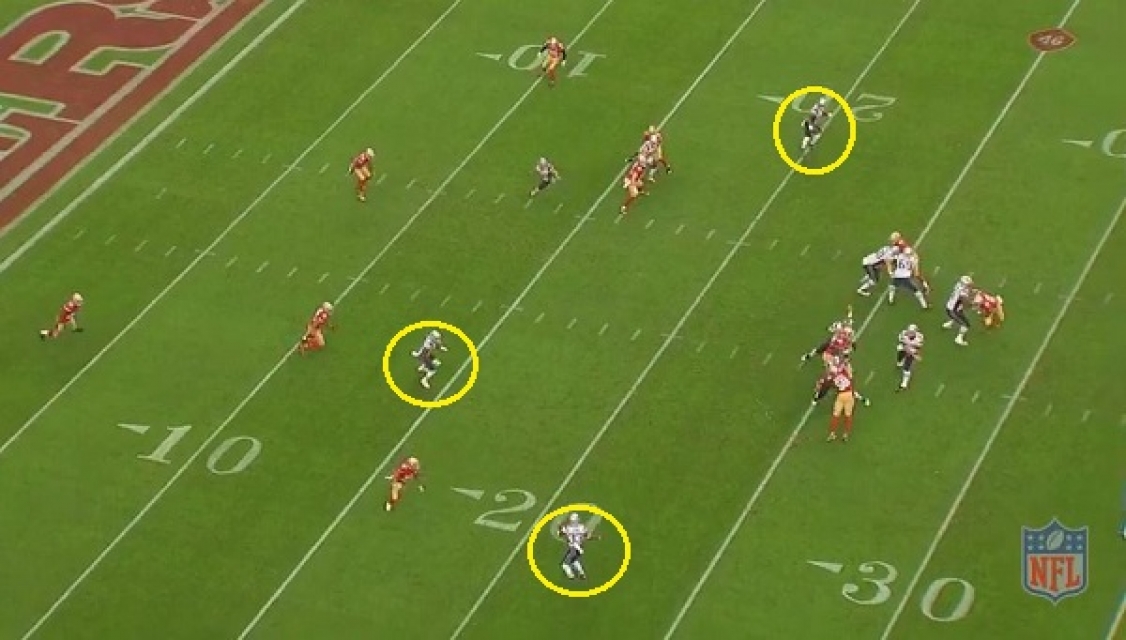 Julian Edelman TD Catch: The Patriots moved to the San Francisco four-yard line where they lined up four wide. James White came in motion from right to left. Edelman is split wide right. Martellus Bennett is in the slot right. 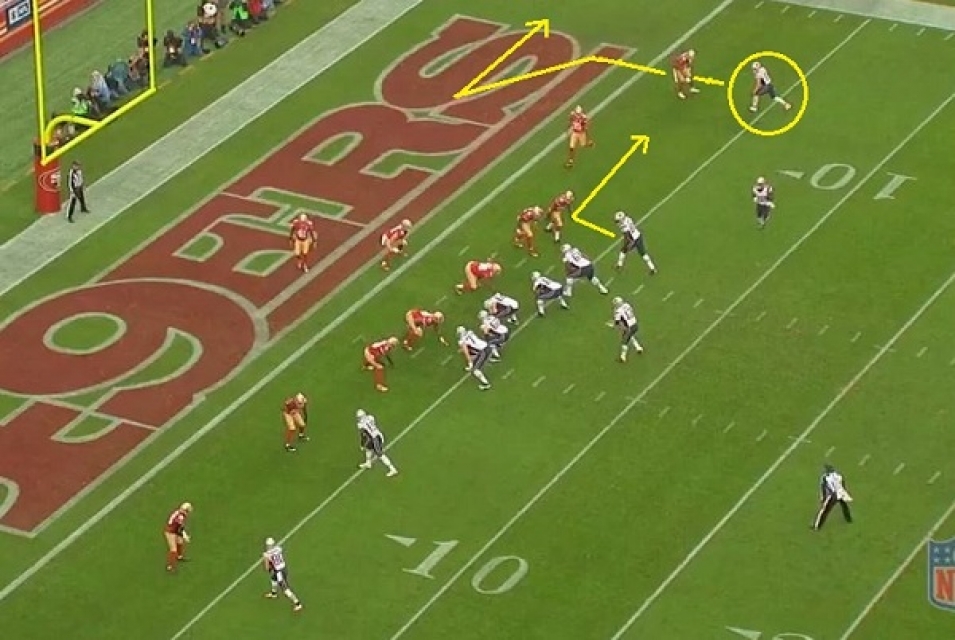 At the snap Bennett runs a short out route right along the goal line, taking two defenders with him. Edelman runs a crossing route along the back of the end zone and is covered well by Keith Reaser, but once Brady begins to move in the pocket to the right, the coverage breaks down. Edelman reverses his field, and his quickness leaves Reaser behind. Brady delivers the ball on the money and Edelman does a nice job of keeping both feet inbounds for the touchdown. 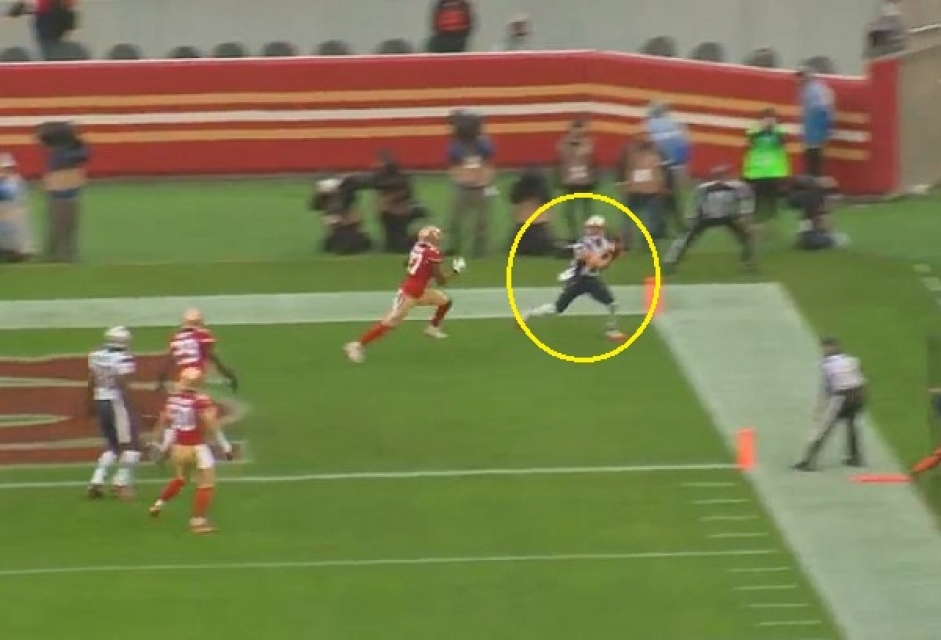 Draughn 26-Yard Wheel Route: This was one of those plays that fans were up in arms about because we’ve seen this one before and it seems that opponents always seem successful with. It was a perfectly executed play by the 49ers and the Patriots were unfortunate because of a slip.

The Niners lined up with a bunch formation on the right side with three receivers tightly aligned. The Patriots answer and deploy Hightower, Chung, and Butler to counter. But at the snap, the Niners do a good job at rubbing the defenders to get open. Jeremy Kerley runs across in the middle of the field and is wide open. Chris Harper drags Butler on a deep post route.

Shaun Draughn flares out on the wheel route. Hightower gets caught up in the wash initially and then the issue is compounded when he loses his footing momentarily allowing Draughn to run free. Rowe in the middle of the field and McCourty have coverage responsibility with Kerley. Hightower can’t catch him and Kaepernick makes the correct call and delivers the ball to Draughn for a big gain. Perfect execution by the 49ers here. Draughn would have been open regardless but the slip probably cost the Patriots extra 15 yards downfield. 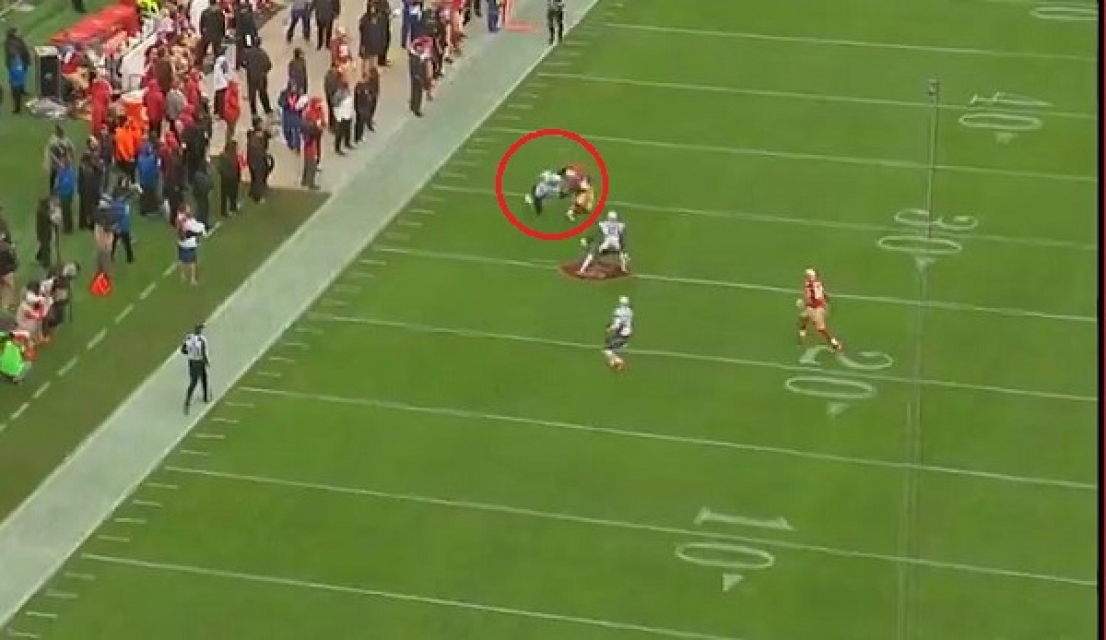 Dont’a Hightower Sack: Hightower snuffed out a possible 49ers touchdown bid with a big sack of Kaepernick on third down at the Patriots six-yard line. The Pats show blitz with four down linemen and Chung and McClellin lined up on the line of scrimmage.

At the snap, Chris Long at the right defensive end crashes down hard to the left drawing the center and left guard with him. McClellin blitzes from the right and is picked up by the left tackle. Initially, all is well, Kaepernick has a good pocket. But the void in the center is filled by Hightower who blasts inside the A-Gap. DuJuan Harris moves up to block him but is easily overpowered. 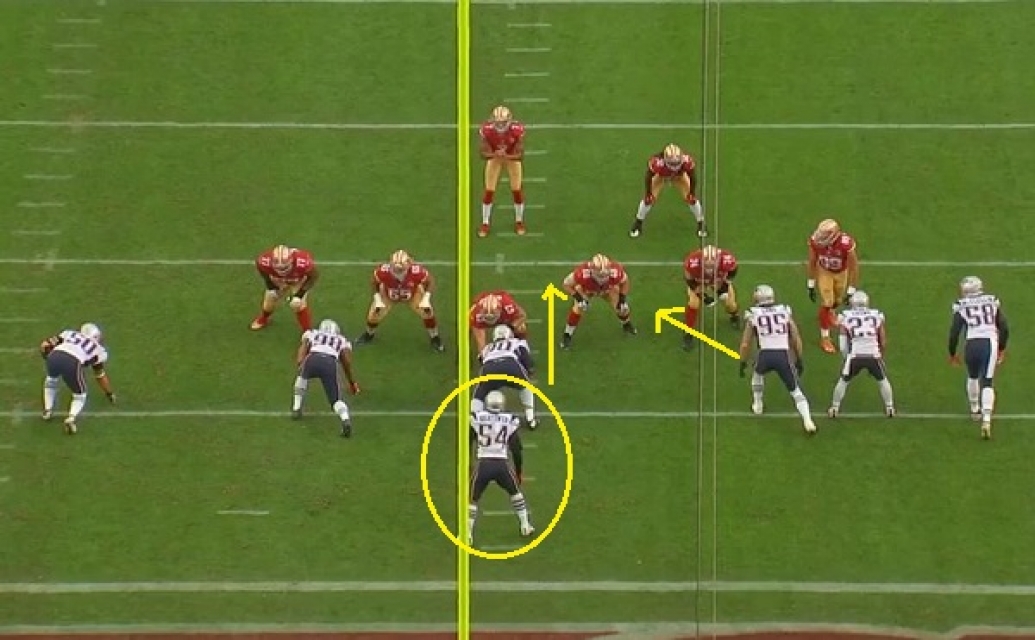 The Patriots by rushing six on Kaepernick were able to stop them for a loss and force a field goal attempt. Good execution by everyone involved and although no one else was able to beat their one-on-one matchups, Hightower’s play snuffed out a possible touchdown pass. 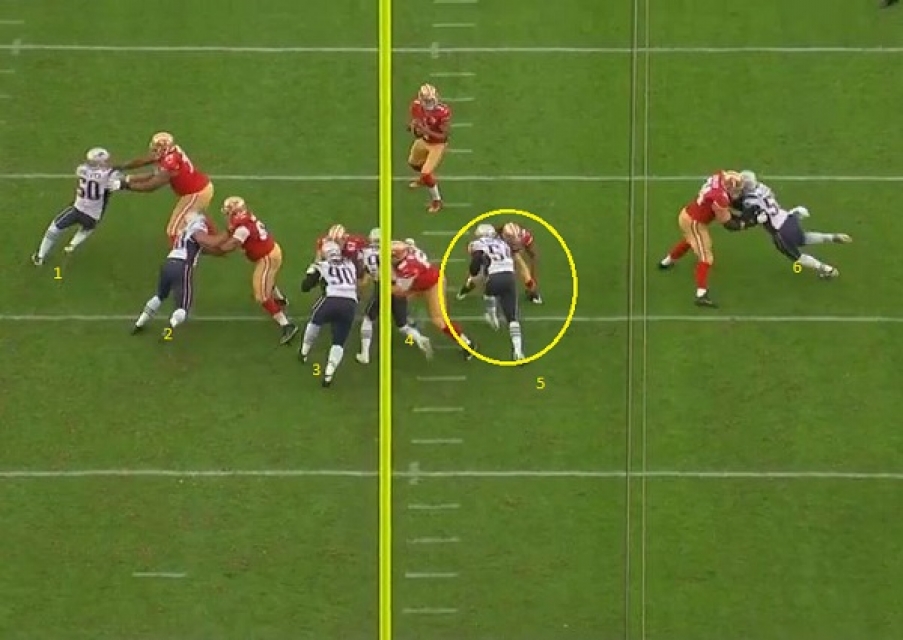 Mitchell 56-yard Touchdown: The Patriots once again used the “Pony” formation to great effect. Lined up at their 44-yard line, the Pats go three wide with Mitchell lined up wide right and Edelman and Amendola wide left. White is on Brady’s right, Lewis to his left. Edelman comes in motion from left to right just before the snap. 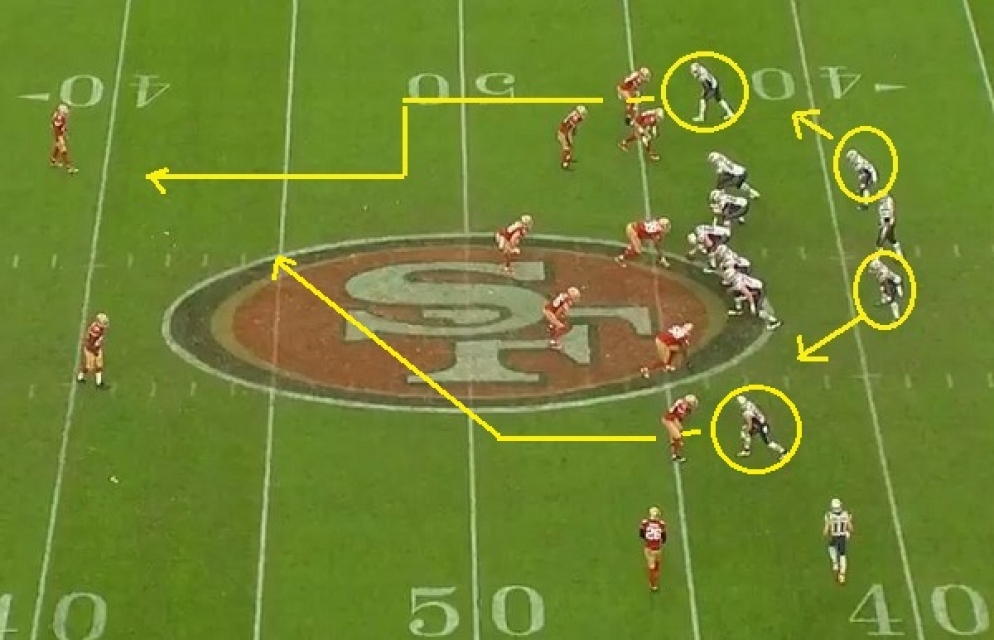 As Brady gets the ball, White and Lewis again flare out of the backfield, Mitchell runs a deep comeback, with Amendola running a deep crossing route. Brady is flushed from the pocket. He again buys time with his feet sliding to the right and the coverage, which was solid breaks down. Mitchell gets behind Reaser, who is caught out of position and in chase mode. 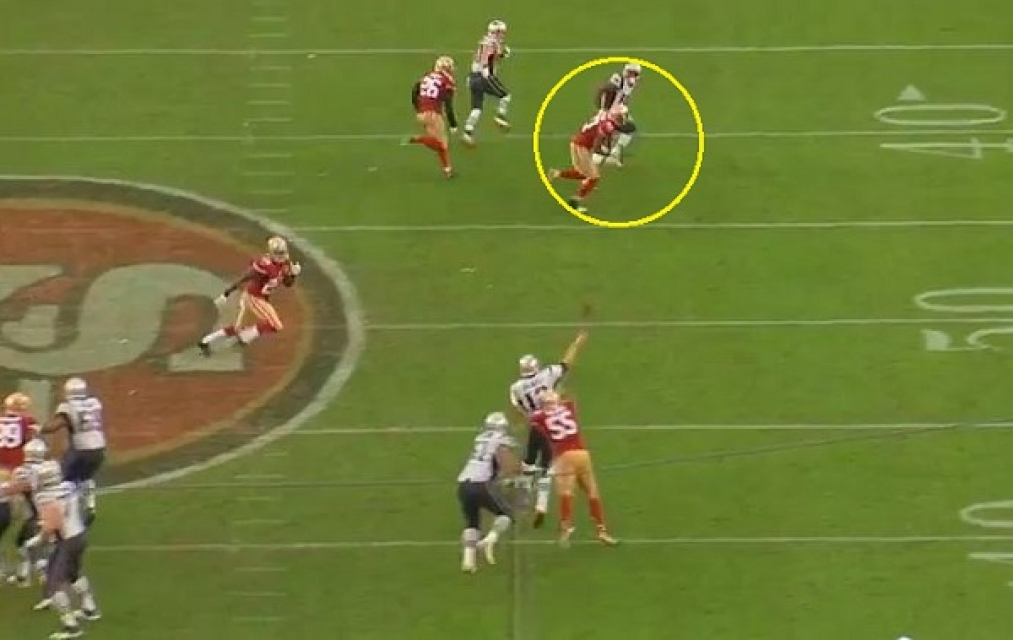 Brady delivers the ball just barely over his head and Mitchell as he catches it runs under Trumaine Brock who was in catchup mode with Amendola. He then sprints untouched into the end zone for his first NFL TD. This was a play that was well covered at first but illustrates again, that once a QB breaks containment, bad things usually happen in the secondary. 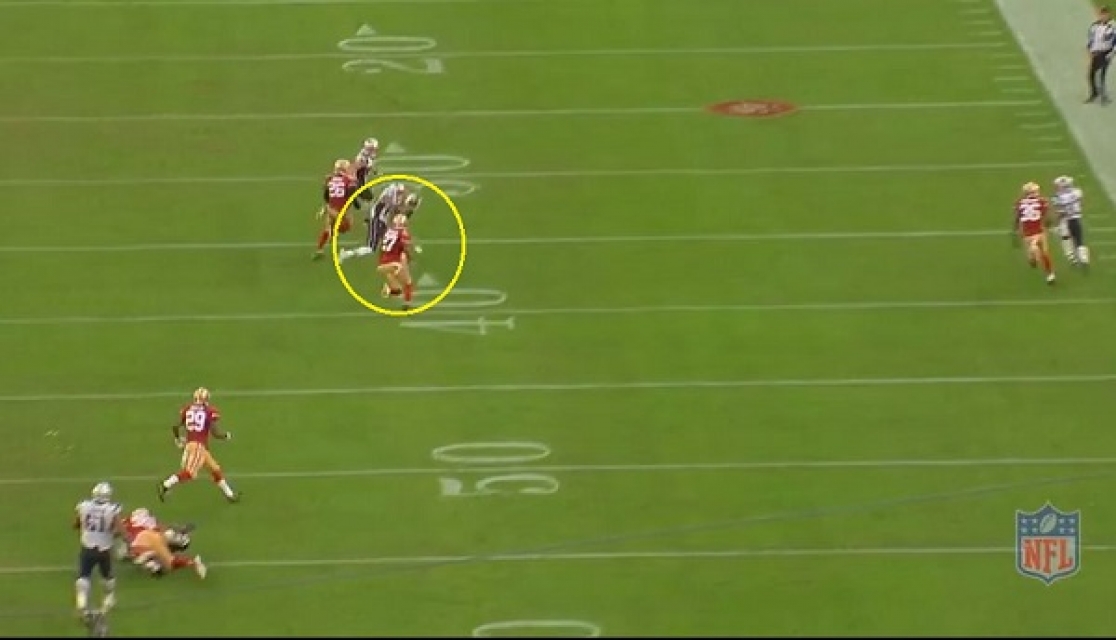