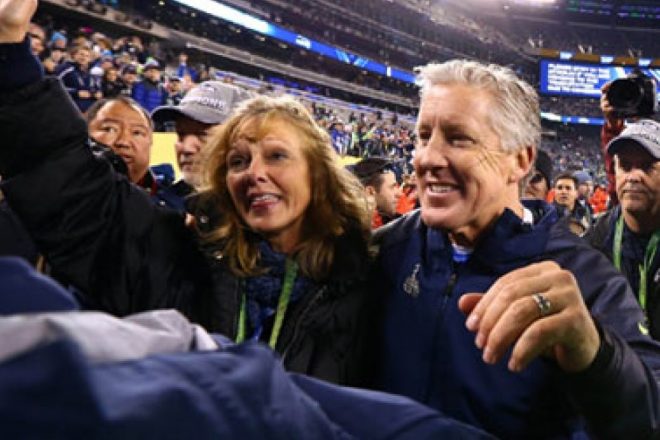 Seattle Seahawks head coach Pete Carroll has gotten used to his ears ringing over his last seven seasons at CenturyLink field as its repuation as loudest stadium in the NFL continues to grow.

Which is why following his teams upset victory over the Patriots on Sunday Carroll took time to comment on how quiet the Gillette Stadium crowd had been throughout the game despite it being a close contest right down to the final play.

Speaking during his weekly appearance on the “Brock and Salk Show” on ESPN radio in Seattle, Carroll remarked;

“It’s not a great place…They weren’t nuts. It’s because they’re so used to winning. There was a time when they kicked their last field goal to go ahead, and it was like a round of applause for the nice effort and stuff. Gosh, our guys would be going berserk. We’re so hungry for it.”

From 1997-1999 Pete Carroll coached the Patriots to a 27-21 regular season record but to just one playoff win, Sunday was his first appearance back in New England since his firing.

For many in Patriot Nation, football social media tended to agree with Carroll’s sentiments rather than offended, with many noting the teams ticket rising ticket prices with the wins forcing many die hard fans to stay home while creating a “wine and cheese” crowd in attendance. There was even a past discussion about it in the PatsFans forum back in 2011.

Pete Carroll said Gillette Stadium "wasn't nuts" and the fans are just "ok". He's right, it's always been one of the quietest stadiums

According to the financial website Bankrate.com, the Patriots have the second highest average ticket prices in the NFL at $122, just a dollar behind the New York Giants highest rate at MetLife stadium. Compare that to the cheapest tickets in the NFL in Jacksonville for an average $57.65.

Gillette Stadium is also at an architectural sound disadvange to a place like CenturyLink, the stadium has a far more open air design whereas the CenturyLink seating is compacted and curls inward trapping noise alot more effectively.

Its not the first time Gillette Stadium’s crowds have been discussed publicly, on two occasions quarterback Tom Brady referenced the lack of noise, stating in 2014 “Our stadium has been very loud at times and we’ve got sometimes a great crowd, sometimes we don’t have a great crowd. Sometimes it’s not as loud as it may be for other teams, but the better we play, the louder it will be so we’re going to focus on trying to play better. ”

In 2011 before the season opener, Brady famously told fans to “Start Drinking Early.”

So while the Patriots may not have a Guiness World Record breaking, earthquake creating fanbase, Carroll did make sure to credit the fair share of heckling directed his way, namely at his now infamous Super Bowl coaching blunder.

“There was a lot of, ‘Thanks for throwing it.’ That kind of stuff, all that kind of garbage,” Carroll said. “They were just being themselves. It was great. It was classic.”