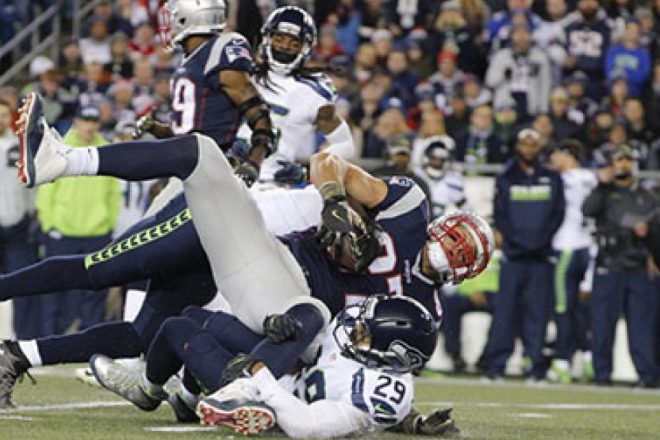 Patriots tight end Rob Gronkowski said after Sunday night’s game against the Seahawks that the shot he took from safety Earl Thomas was one of the biggest of his career, and it sounds like he may have had no idea just how bad it really was.

According to the NFL Media’s Ian Rapoport, the veteran tight end reportedly suffered a possible punctured lung, which will keep him out of action this week when the team travels to San Francisco to take on the 49ers.

The play happened with just over four minutes left in the second quarter, yet Gronkowski played on, missing just 10 of 67 snaps while making some key plays down the stretch that nearly allowed them to potentially force overtime.

“That was a big hit for sure; probably one of the hardest I’ve got hit in my career,” said Gronkowski after the game. “[It was] by a good player; a good fast player who’s like a missile. It was a good, clean hit; nothing against it.”

It was a play where quarterback Tom Brady left his tight end in a tough spot, which seemed to be something they had been doing a better job of avoiding to begin 2016.  On previous plays up the seam so far this season, Brady seemed to be only targeting him when he was matched up one-on-one without another safety having a bead on him.  In past seasons, there were plays where Gronkowski took some big shots on seam routes when that wasn’t the case, one of which was a season-ending knee injury against Cleveland back in 2013.

However, on Sunday night’s play, Gronkowski had safety Kam Chancellor beat but Earl Thomas had the perfect angle as the ball arrived and he completely drilled him, driving his shoulder square into the chest of the 6’6″, 265-pound tight end in what appeared to be a pretty violent collision.  The hit stopped Gronkowski dead in his tracks, dropping him to his hands and knees for a brief moment before he got up and walked off the field.

He was taken out of the game to undergo the league’s concussion protocol but it wasn’t his head that was the problem.  Gronkowski admitted that the hit left him winded, making it tough to breathe.  After Monday’s news, that certainly adds a little more context to it.

“I just took it and it just knocked the wind out of me a little bit, that’s all,” said Gronkowski. “If you’ve ever gotten the wind knocked out of you, you know what that feels like. Just down for about a minute or two, it’s a little tough to breathe, but once it comes back, you’re good.”

After the play he missed just five plays before coming back in and finished the night with 3 receptions for 56-yards.  He currently has 25 receptions for 540 yards and 3 touchdowns so far this season.

Gronkowski was asked after the game if he was glad Thomas hit him up high instead of his knee and the veteran admitted he was O.K. with it.

“Yeah, it was a good, clean hit,” said Gronkowski. “I have no problem with it. He hit me fair and square. It’s football. You’re going to get laid out eventually.”

For Gronkowski, it sounds like he’s fortunate it wasn’t worse.