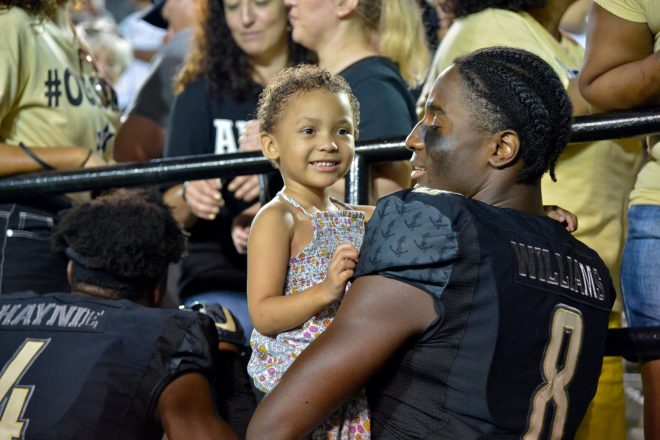 It’s been a solid preseason for Patriots defensive back Joejuan Williams, who has been terrific so far and looks like a player ready to contribute in their secondary.

Here’s a quick rundown of everything that’s been written about him so far this preseason:

“Joejuan Williams closed quickly on a Hoyer completion to Maurice Harris to make a stop shy of the end zone.” – Jeff Howe, TheAthletic – 7/25/19

“Brian Hoyer made a perfectly weighted toss to speedster Phillip Dorsett on a post route that went for a touchdown against rookie cornerback Joejuan Williams.” – Hayden Bird, Boston.com – 7/26/19

“Got roasted by Dorsett for a touchdown and on a few other passes. Needs to start picking it up.” – Greg Bedard, Boston Sports Journal – 7/26/19

“Joejuan Williams had his best day of camp and broke up another pass to Watson. He had a couple on nice breakups today. ” – Steve Balestrieri, PatsFans.com – 7/31/19

“Rookie cornerback Joejuan Williams made his best play of camp, breaking up a pass intended for Dorsett from quarterback Brian Hoyer in 11-on-11s.” – Doug Kyed, NESN – 7/31/19

“Rookie CB Joejuan Williams broke up a deep throw intended for Phillip Dorsett. He’s barely made contact with a receiver or the ball so far in camp, so that counts as a step in the right direction.” – Matt Dolloff, 98.5 The Sports Hub – 7/31/19

“Rookie CB Joejuan Williams broke up a deep throw intended for Phillip Dorsett. He’s barely made contact with a receiver or the ball so far in camp, so that counts as a step in the right direction.” – Matt Dolloff, 98.5 The Sports Hub – 7/31/19

“Rookie cornerback Joejuan Williams enjoyed his best practice to date. Early in the session, Williams ran stride for stride with Phillip Dorsett and broke up a deep ball on a corner route. Later, Williams stepped in front of Maurice Harris to bat down a short pass over the middle.” – Kevin Duffy, Boston Herald – 7/31/19

“In a late 11-on-11 drill, Harry beat rookie CB Joejuan Williams and reeled in the ball as he toppled to the ground, drawing loud cheers from the crowd. Harry got up and threw his arms in the air in celebration and chest-bumped with WR Braxton Berrios. ” – Matt Dolloff, 98.5 The Sports Hub – 8/01/19

“Williams covered Harry well on a deep post early in this period. He looks to be making progress after looking overmatched at times earlier in the offseason and at the start of camp.” – Matt Dolloff, 98.5 The Sports Hub – 8/01/19

“Harry had a great haul on a deep pass for a touchdown that left Duron Harmon upset with Joejuan Williams.” – Greg Bedard, Boston Sports Journal – 8/01/19

“Rookie Joejaun Williams did a great job of hanging with Travis Fulgham on a deep route to force an incompletion.” – Paul Perillo, Patriots.com – 8/05/19

“J.C. Jackson and Joejuan Williams both grabbed interceptions. Jackson’s was against Brady going deep for Damoun Patterson, as he stayed underneath and snagged the ball with what looked like one hand. Williams undercut a route to Dorsett on a throw from Jarrett Stidham to make his pick.” – Matt Dolloff, 98.5 The Sports Hub – 8/12/19

“JoeJuan Williams had one of his strongest practices, finishing with two interceptions and two pass deflections.” – Mark Daniels, Providence Journal – 8/12/19

“Cornerback Joejuan Williams had perhaps his best practice of the summer. He was very active and made a few plays. This comes after he saw a lot of snaps against the Lions.” – Ryan Hannable, WEEI – 8/12/19

“Joejuan Williams made good use of his height and hands in a jump ball against Harris. Brian Hoyer rainbowed a ball toward Harris, but as the receiver tried to make the catch, Williams stuck in his hands for a breakup.” – Henry McKenna, USA TODAY – 8/12/19

“Joejuan Williams did a nice job staying with Maurice Harris on a deep pattern down the right sideline. Harris couldn’t get position on the rookie, who managed to knock the pass away with an impressive leap.” – Paul Perillo, Patriots.com – 8/12/19

“Jarrett Stidham was 8 of 14 with two interceptions. The first pick would have been a Derek Rivers sack, but the play continued and Stidham tried to hit Danny Etling on a deep ball. Joejuan Williams blocked out Etling and easily picked it off. The second interception was also for Etling, who bobbled the ball and lost it to Gilmore.” – Jeff Howe, The Athletic – 8/12/19

“Williams’ momentum continues to build. He has a team-high seven passes defensed in team drills with one pick and six breakups. It’d take a lot for him to leapfrog Jason McCourty, J.C. Jackson or even Jon Jones, but the coaches have to be happy about Williams’ progress.” – Jeff Howe, The Athletic – 8/12/19

“The second-round pick had his best practice by far with two interceptions and a pass breakup. He appeared much more confident and physical. Was basically a blanket all over the field.” – Greg Bedard, Boston Sports Journal – 8/12/19

“After enduring a rough start to camp, Williams has come on in major, playmaking fashion lately. He boxed out Dorsett to intercept a deep ball in 1-on-1s, then picked off Stidham on another bomb during a team period. Williams also broke up a pass intended from Harris. No doubt this was the second-round rookie’s best practice as a pro.” – Andrew Callahan, MassLive – 8/12/19

“McCourty’s consecutive pass breakups early in team drills set a foretelling tone for the defense. Williams and Keion Crossen were the only other players to post multiple PBUs Thursday.” – Andrew Callahan, MassLive – 8/12/19

“A real nice day for cornerback Joejuan Williams, who had an interception during team drills (against Jarrett Stidham) and another in individual drills (against Tom Brady). The second-round pick also had a pass breakup during full-squad work ” – Jim McBride, Boston Globe – 8/12/19

“Had two interceptions today to go with his multiple breakups on Monday. It appears the game is now slowing down for the second-round pick and he’s starting to make plays. This is the type of progress you like to see from rookies and now the hope is he starts to stack success.” – Greg Bedard, Boston Sports Journal – 8/14/19

“The Titans didn’t do much on offense, but most of it was against McCourty, who allowed three big passing plays, including two from Tannehill. With J.C. Jackson and, now, Joejuan Williams possibly breathing down his neck for a starting spot, the veteran doesn’t want to give the upstarts an opening right now.” – Greg Bedard, Boston Sports Journal – 8/14/19

“Stephon Gilmore and Joejuan Williams made nice plays during goal line 1-on-1s. On separate reps, they prevented Titans wideout Corey Davis from coming down with the ball on fade routes to the back corner.” – Kevin Duffy, Boston Herald – 8/15/19

“Joejuan Williams remains a work in progress, but he has steadily improved throughout camp, which is all anyone can ask for at this point. His progress showed up again Thursday when he won a one-on-one drill against a Tennessee receiver by breaking up a fade to the corner of the end zone.” – Jeff Howe, The Athletic – 8/15/19

“When the Patriots’ twos came in, there was a tough rep for rookie Joejuan Williams and Keion Crossen, who had a bust that resulted in an easy score. Williams also got whistled for a defensive hold in the end zone.” – Tom E Curran, NBC Sports Boston – 8/15/19

“Ryan Tannehill threw a touchdown to Taywan Taylor when it looked like Keion Crossen blew a coverage. Titans should have scored earlier to Darius Jennings but Tannehill’s throw was awful. It bailed out Joejuan Williams, who wasn’t listening to the communication from the other DBs and he failed to adjust.” – Greg Bedard, Boston Sports Journal – 8/15/19