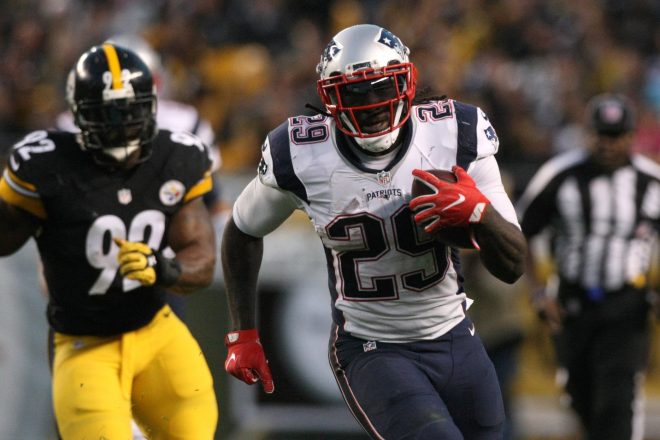 Blount On a Crazy Pace – Looking back at LeGarrette Blount’s numbers this season, it’s hard not to notice the impressive start the veteran running back is off to through the first seven games of this season.

Blount has carried the football 143 times already this season, just 22 behind his entire 2015 total that he managed in 12 games.  He’s also scored eight touchdowns, more than the six he had last year before his season-ending injury.

At the pace he’s on right now, after rushing for 566-yards, he’s on pace for almost 1,300 yards, which would be a career high and would be the most for him since he rushed for 1007 yards on 201 carries back in 2010 when he was a rookie with the Buccaneers.

One area that has been tough is opposing teams have done a good job getting him before he gets started, stopping him for no gain 13 times, while bringing him down 17 times for a loss.  That’s already ahead of his total from last year where he finished with 9 carries for no gain, while being stopped for a loss 10 times.

However, he’s done a better job of getting into the second-level more than he was able to last year.  Looking at the totals, he already has 35 carries for six or more yards this season, just five behind the 40 he had last year.

His running on Sunday was critical in New England’s win, as he helped keep the Steelers’ defense off balance just enough for them to start making some plays in the passing game, while breaking off some big carries of his own.

“They tried to play some nickel defense against Rob and Martellus Bennett and we were able to get some good runs going with Blount,” Belichick said after Sunday’s win. “That kind of offset some of the defense they were playing there. I thought our receivers made some good blocks in those situations too, to be able to get the force guys.”

“Blount ran hard. He had good ball security and good pad level. He made some tough yards. He made some big play, explosive runs for 12 to 15 yards. He had one long one for 25 yards. He gave us some explosive plays. We needed that particularly when they cut it to a four-point game. He gave us a couple big runs there to settle things down where it just wasn’t a pass-rush game for them all day.”

It’s definitely a great start and hopefully, if he can remain healthy, it looks like he could end up with some pretty impressive numbers by the time the season is over. 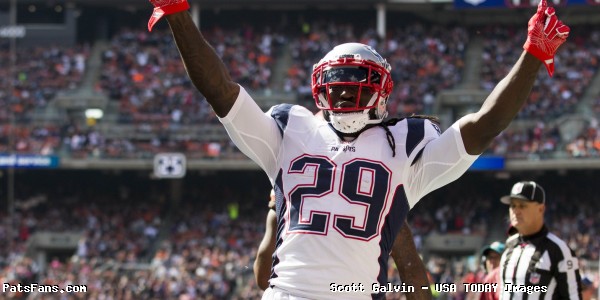 Blount’s having a tremendous year so far. (USA TODAY Images)

Kraft and Jones Go at it at Owners’ Meeting – The NFL started a policy last week regarding the use of video images of their own highlights on their social media feeds, which seemingly hasn’t sat well around the league with several clubs and apparently Jerry Jones was one of those people.

According to CBS’ Jason LaCanfora, the Cowboys owner voiced his displeasure at this week’s owners meeting in Houston and apparently ended up in a heated exchange with Patriots team president Jonathan Kraft, who co-chairs the NFL’s digital media committee.

Jones argued that since it’s the team’s players who were generating the highlights, the clubs should be able to do what they want with them on social media.

It reportedly became quite an issue as he argued his point and eventually Kraft got up and left the meeting room at one point.

Kraft’s position as it pertains to digital media shouldn’t be a surprise, especially given the importance the Patriots have always placed on it.  What many fans may not realize is the Patriots were actually the leaders in this field and were the first club going all the way back to the mid 1990s to consistently conduct video broadcasts of their press conferences and an online news show, which despite being pixelated on the original RealPlayer software, was light years ahead of what other teams were doing at the time.  Back then, each club had their own individual website and it was up to them to handle the design, function and content and the Patriots were pushing the envelope, and continue to, in that regard long before the rest of the league started to catch up.

Even now, the team has far more multimedia content than any other club, as well as press conference transcripts and video, with all of that content helping to feed their social channels, with each among the largest in the NFL.

With this new policy in place, the NFL obviously has a long-term plan coming to better control their content, which they fiercely protect.   But the reasoning behind it is likely because on any given game day you’ll see highlight gifs popping up on dozens of non-league sanctioned channels.  Given that under this new policy teams can be fined as much as $100,000 for each violation, you can only imagine what that means to those who may be posting them illegally on social media.

Needless to say this is an area to watch since the situation is sensitive enough where even NFL owners are arguing about it.

Frustration in Pittsburgh – Monday morning saw a lot of anger in Pittsburgh, with fans feeling like their team had a good shot against a Patriots team that made their fair share of mistakes, to the point where they had an opportunity to beat them.

But one area that was hotly debated was their decision to not go for a late 4th down attempt, which led to a missed field goal on a 54-yard kick that seemed like a longshot given that they play in what is arguably one of the tougher stadiums to kick in.  Head coach Mike Tomlin was asked if he considered going for it on that play in lieu of the field goal, and Tomlin replied, “I did not.”

That decision didn’t sit well. Neither did his challenge on Rob Gronkowski early in the game where the tight end clearly had the football after Tomlin challenged his reception, which hurt them late in the first half when they were missing that critical timeout.

Despite the coaching miscues, Tomlin didn’t take any responsibility and instead simply felt they left too many plays on the field.

“We realized that our margin for error was minimal,” explained Tomlin. “We left some red zone possessions out there offensively, we threw an interception when we were down there, we missed a field goal … you can’t do that against good people.”

But they did and his decisions didn’t help.  Now their fans may not get to see a rematch at Heinz Field in 2016 thanks to this loss should these teams finish the rest of the season strong and end up facing each other down the road in the postseason.

Bledsoe to Romo: ‘Just Be a Pro’ – Tony Romo has been making his way back from injury and finds himself in a tough situation right now with back-up quarterback Dak Prescott playing well for the Cowboys.

That’s left Romo in a tough spot as Dallas continues riding the hot hand, but so far Romo has seemingly been handling the situation well and former Cowboys QB Drew Bledsoe knows what Romo’s going through given what happened here in his final year in New England when Tom Brady eventually took over the starting role.

That was a difficult year for Bledsoe, who was a massive part of the resurgence of the team before they won their first championship with Brady as the strarter.  Bledsoe said that the situation was difficult, but he decided that putting the team first was more important and that’s exactly the advice he’d give Romo.

“It’s a hard thing, man,” Bledsoe told the Rich Eisen Show in a recent interview via DallasNews.com. “You’re stuck in a situation where you’re really cheering for your team — I mean you always want your team to win — but the flip side of it is you want to believe that your team can’t win without ya. You want to feel like you’re the reason that this whole thing happens, or at least part of it. Then when the team goes on and has success without you, on a personal level it’s really difficult but on a team level you’re really excited for the team.”

Bledsoe admitted that his own situation was difficult and he went through a rollercoaster of emotions before he settled down and finished out the year by doing his best to help his team win, although it wasn’t easy for him.

“When [Bill] Belichick made that decision it required some soul searching as to how I was going to approach it,” said Bledsoe.  “I had all the thoughts you obviously would have. ‘This isn’t worth it. I’m going to quit’ and all those things. But ultimately for me it was about doing the right thing. And the right thing was to go support Tom and support the team and try to do everything I could to help us be successful and ultimately went on to win the Super Bowl that year.”

As for his advice for Romo?

Patriots release Sunseri, Waive Johnson – The Patriots made a couple of moves on Monday, waiving defensive lineman Anthony Johnson as well as releasing safety Vinnie Sunseri from the practice squad.

Johnson had an up and down year in his brief time in New England, appearing in four games this season with one start.  However, as a previous practice squad player, he showed some flashes during his time on the field so it will be interesting to see if he ends up back with the club in that capacity.