Belichick has nothing to say about Burfict’s hit – Vontaze Burfict showed his true colors again on Sunday during the Patriots win over the Bengals, trying to inflict pain on the team he’ll likely be watching from home on his television in January.

With his team in danger of dropping their fourth game of the season, the Bengals linebacker tried to take out two Patriots after diving at Martellus Bennett’s knees and stomping on LeGarrette Blount’s leg, two notable plays that the Patriots were fortunate didn’t cause the damage he was likely hoping for.

Fortunately, it sounds like the league is at least looking into his egregious acts.  According to several reports, a fine appears to be coming his way, although it remains to be seen if a suspension might also be in his future.

Bill Belichick was asked about Burfict’s plays on Monday during his conference call with the media and had little to say, but he gave a snarky response in terms his wording as it pertained to the league stepping in and addressing the play.

“We’ll let the league talk about that play that you asked about before,” said Belichick.  “It’s their decision. It doesn’t really matter what any of us think about it anyway.”

Brady said during his weekly appearance on WEEI Monday morning that it’s not unusual to see those tactics from the Bengals, although he admitted he hadn’t seen the play in question as it pertained to Bennett.

“You have to deal with that sometimes, too. I think we were dealing with that most of the day,” Brady said. “I haven’t seen [the Burfict hit], so I’m sure I’ll have some different thoughts …” 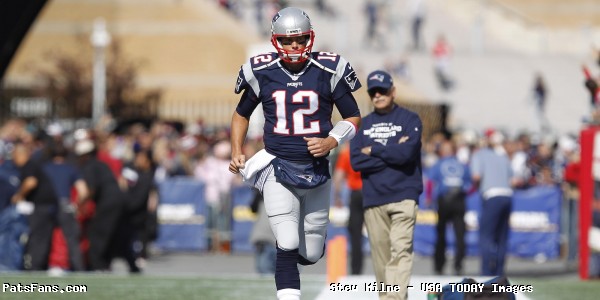 The Patriots put together quite a tribute for Brady Sunday. (USA TODAY Images)


Patriots Video Montage for Brady Was Epic – Fans who were at Gillette Stadium on Sunday got to experience the moment that Tom Brady came out of the tunnel before the game but for everyone else, there’s at least a way to get a glimpse of how it went down.

The team released a video through their Twitter account on Monday showing the video montage they put together with a tribute to their veteran quarterback, which featured the song “Coming Home” playing in the background.

This will give you chills and if it doesn’t, there’s clearly something wrong with you:

Rowe Feeling Good About Himself after Battling A.J. Green – Former Eagle’s cornerback Eric Rowe has flown under the radar a bit since joining the Patriots, but on Sunday against the Bengals he did a pretty good job against one of the best receivers in the league in Green.  According to NESN.com, he held Green to just one reception for 9 yards under his watch, which is an impressive feat given what a tremendous target he is in the Bengals’ offense.

As a result, he’s feeling pretty good about the way he played, and he’s hoping it leads to some more opportunities to help his new team.

“It’s a huge confidence-booster,” Rowe said Sunday via NESN. “It kind of reminded me of last year against Calvin (Johnson), and I had at least a pass breakup. Even if it was a little bit of a spotty game, it boost my confidence knowing I could play with these elite receivers like him and now A.J. Most importantly, it’s a confidence boost for the coaches. They can see I can get out there and play. So you know, I can get some more opportunities.”

Patriots had their own headset issues on Sunday – Two weeks removed from smashing his tablet thanks to technical issues in their last game at Gillette Stadium, Bill Belichick’s team once again had some additional technical difficulties in Sunday’s win over the Bengals.

According to CSNNE’s Tom Curran, the Patriots were “forced to go old school” after they had communication issues with their headphones, leaving them to have to use hand signals to signal in the plays on both sides of the football.

Opposing coaches seem to believe there’s something sinister going on in the confines of New England’s home field, but the news of the Patriots’ having problems didn’t reach the national airwaves, unlike the last time when the Steelers were in town and Mike Tomlin made a big deal about the fact the team’s radio broadcast was coming through his headset during periods of that game.

Baby Gronk and Gaffney Return – The Patriots made a couple of transactions on Monday, with Glenn Gronkowski and Tyler Gaffney each being added to the team’s practice squad.

Gaffney was a player who showed plenty of promise in the preseason but a foot injury in the final game ruined a pretty good run as the Patriots placed him on injured reserve before later releasing him from that designation with an injury settlement.

As for Gronkowski, his brother, Rob told ESPN last Thursday that Glenn had been staying with him during his previous stint on the practice squad, and he was hopeful to see him back.

“It was always great being able to hang out, talk to him at night, crack jokes, get along with each other,” Rob said via ESPN. “Hopefully we’ll get him back. I believe that when I saw him, he did a great job when he was here. … I was super impressed with him how he played.”

READ NEXT:
OPPOSING VIEWS: Mood in Pittsburgh is Pretty Grim
Posted Under: Uncategorized