After an interesting week, here are some final thoughts on this Saturday before Tom Brady’s return against the Browns:

1) Taking a look at things from a Browns perspective, the Browns saw what the Bills did last Sunday to New England’s defense and it seems like according to comments by Browns head coach Hue Jackson, the game plan this weekend will likely include trying and replicate the 32 carry, 134-yard performance Buffalo’s stable of running backs put together when they handed the Patriots their first loss of 2016.

It’s worth noting that 88 of those yards came in the first half, with Buffalo totaling just 46-yards over the final two quarters after the Patriots made adjustments.  The 0-4 Browns aren’t exactly as terrible as they appear and are equipped to run the football, with Cleveland having put up 163 yards last week against Washington, lead by Isaiah Crowell, who gained 120 of them.  That will likely be a focus for New England, who will finally have Tom Brady back on the field this weekend as they look to get back on track after last Sunday’s loss at Gillette Stadium.  With Brady back, they should be able to put up points and control the game, which should cause the Browns to have to change their approach if the Patriots can build a lead and force Cleveland to have to play from behind.

While the Patriots might be the favorite this weekend, the Browns do have the advantage of being at home and despite their record, they’ve been a team that hasn’t gone down easily.  As a result, they seem to have fans in Cleveland believing that the corner they’ve been waiting to finally turn may be inching closer, which should make for a tough environment.  Given the hype that will be surrounding this game from a Patriots perspective, while fans here in new England might be upset over the shutout loss to the Bills, the fact they lost last week might actually be what keeps them from losing this weekend. This is a huge game for the Browns with plenty at stake as they to keep from dropping to 0-5 and they’re likely going to come ready to play. Needelss to say, it wouldn’t be a surprise if they at least end up making this one closer than some of us might expect.

2) One area that will be interesting to see will be how much Rob Gronkowski’s production improves this week now that Brady is back.  After sitting out the first two games with a hamstring injury, the veteran was targeted just once against Houston and then only twice last week against the Bills where he finally made his first catch of the season, which was an 11-yard catch in the fourth quarter on third down.  He’s seemingly been underutilized as Jacoby Brissett appeared to be more comfortable throwing to Martellus Bennett, who is currently second on the Patriots in receptions behind Julian Edelman with 15.  With Brady back, we’ll see how much that balance begins to change, as well as how much of an effect that has on Bennett’s production. 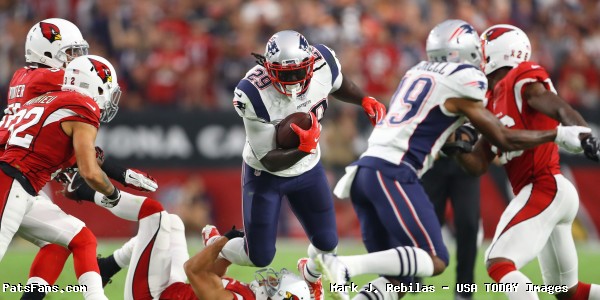 With Brady set to return, will Blount’s production improve even further?

3) With Brady stepping back in under center, I’m curious to see how LeGarrette Blount performs now that the Patriots should hopefully have some semblance of a passing attack against the Browns.  With Brissett’s thumb being injured it was obvious he was having difficulty with his accuracy, and Buffalo took advantage of it.  That put the game in his hands and forced him to try and beat the Bills through the air, which the rookie obviously wasn’t able to do.  With Brady returning, the game completely changes for Cleveland who won’t have the luxury of facing what had been a slightly one-dimensional attack by the Patriots.  With the Browns most likely being unable to put a defensive emphasis on New England’s ground game, it should be interesting to see if Blount is able to put together another 100-plus yard effort this weekend.

4) While Jimmy Garoppolo’s performance in the first two games will be the hot topic of conversation over the course of the rest of the season and into the offseason, it’s hard not to appreciate what Brissett did as a rookie.  While his year appears to be over for 2016, one thing that stood out was the fact that the scouting reports about the former NC State standout’s accuracy were well-founded, especially when you look at the near-misses that seemed more like they were off the mark due to his injured thumb.  Say what you want about his lack of production, but one big positive is the fact he didn’t make any really bad decisions throwing the football and didn’t throw interceptions.  Granted one play that will likely haunt him a bit between now and next season will be his red zone fumble last week against the Bills, but that’s one of those miscues that was simply a rookie mistake, and it’s one that he’ll likely learn from.

If you watch other games around the NFL, you’ve probably seen plenty of mental errors by quite a few quarterbacks, many of whom have been starters for quite a while.  While his final NFL start may have ended in a shutout loss, Brissett should be feeling pretty good about what he managed to do in a league with plenty of other veterans who are still out there making rookie mistakes.

5) Looking at the numbers for this season so far, one area that stands out is how fortunate the Patriots have been in the turnover area, especially given how much the ball has bounced their way through four games.  The most glaring area is the fumble category, which has seen the Patriots fumble the football a staggering 12-times while losing just four of them.  That’s beyond amazing, especially considering they’ve recovered 4-of-6 from their opponents.  As they say, sometimes it’s better to be lucky than good and New England is fortunate that things have worked out in their favor given how many times they’ve put the football on the ground.  Considering how much Bill Belichick emphasizes ball security, that’s a stat that has probably been discussed ad-nauseum and hopefully something that also improves moving forward. 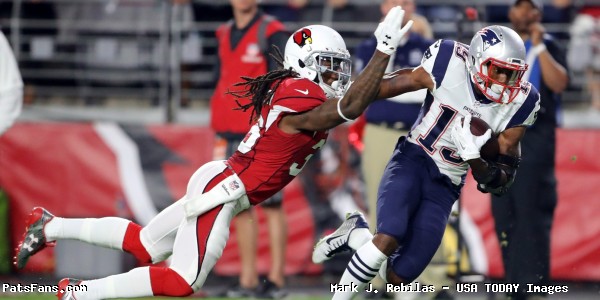 Mitchell had been off to a strong start before last Sunday.

6) Another player to keep an eye on this week will be receiver Malcolm Mitchell, who despite coming to the aid of Brissett in that ridiculous pregame altercation last week, finished without a reception for the first time in four games.  Mitchell had been off to an impressive start and had put together a pretty good streak of big plays before last weekend, having had a reception of at least 15 yards or more in each contest.  He caught a 28-yard pass in Week 1, a 15-yard catch in Week 2 and had a 27-yard reception in Week 3.  Mitchell has seen a significant drop in playing over the last two games, going from 39 and 31 offensive snaps in Weeks 1 and 2 respectively, to just 16 and 20 offensive snaps in the last two weeks.

For a rookie, Mitchell has been one of the more pleasant surprises during the early part of the season and for the first time in quite a while, the Patriots look like they might have a wide receiver to develop in their offense.  If he and Chris Hogan can build some chemistry with Brady, this is a receiving corps that so far appears to be one of the deepest and most talented in a long time.  With 12 weeks still left to play and some tough games coming up as the Patriots get set to embark on a stretch that includes five of the next seven on the road, it’s good to know that Brady has more weapons than he’s really ever had in the past from top-to-bottom.  With his season now set to begin, now it’s just a question of how well he’s able to settle back in and take advantage of them.