6 years ago at 6:47 am ET
Follow @SteveB7SFG
Posted Under: Patriots Commentary 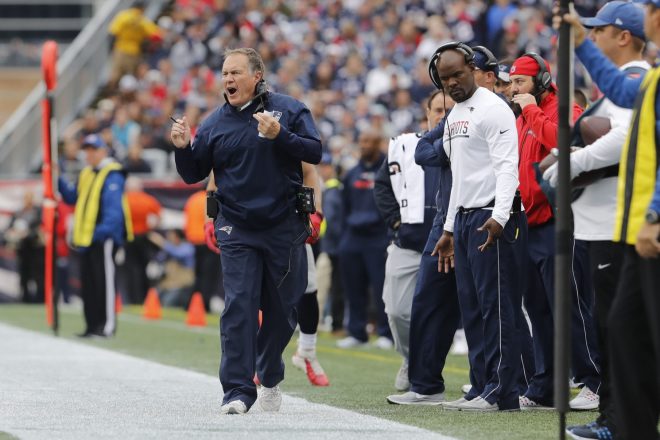 The Patriots are 3-1 at the quarter pole of the 2016 and if most people were asked this summer if they’d be happy with that kind of start with Tom Brady, Rob Ninkovich, Dion Lewis and for intents Rob Gronkowski missing for the first four weeks, they’d take it. But after a very good start, the team thudded back to earth with a lackluster effort on both offense and defense and were thoroughly outplayed.

So how did the Patriots grade out? Well, this week’s report card is indicative of the way they played. It wasn’t pretty.

So we’ll start with the offense and the players can come forward to pick up their grade sheets.

Quarterback: D
Jacoby Brissett got the 2nd start of his career in place of Garoppolo who is still suffering from the AC joint sprain and this week the Bills defense made him look like the rookie he is.

His numbers weren’t awful, completing 17 of 27 for 205 yards but what was missing was the WRs. While Brissett had a nice day connecting with TE Martellus Bennett, he completed only one pass to a WR, a 16-yarder to Julian Edelman. He overthrew Chris Hogan in the end zone and Danny Amendola on a deep seam route that was wide open. He should have had a touchdown pass to Brandon Bolden on a play down the right sideline but he dropped it.

He made the rookie mistake of trying to force a third down run between two defenders where he had no chance of making the first down. He should have slid around the 11-yard line and given Stephen Gostkowski the chance to make a chip shot field goal. Instead, he turned the ball over after getting jarred with a big hit at the 10-yard line.

Running Backs: C
LeGarrette Blount didn’t get a lot of work in this one carrying only 13 times for 54 yards as the team fell behind early and forced to play catch up. There were times when he didn’t have any room to run but made some nice cuts on others. James White got a couple of carries in garbage time but made a few nice catches in the passing game. Brandon Bolden caught three passes out of the backfield but will be remembered for the one he dropped, an easy touchdown where his man was beaten cleanly.

Wide Receivers: Incomplete
Other than Edelman making the one catch and a Wildcat run up the middle, the wide receivers were on a milk carton for the afternoon. Edelman had one catch for 16 yards and one for 90 that was called back due to a penalty on Hogan and that was it.

We mentioned Hogan had the one pass overthrown in the end zone as well as the Amendola play, but the way they simplified the offense for Brissett, the young QB was taking the check-downs to the TE and RBs. Hogan got flagged for the penalty that wiped out the Edelman 90-yard play on their 2nd play from scrimmage.

Tight Ends: B
Martellus Bennett had a tremendous game in the passing game this week. He was Brissett’s go-to guy and he produced. He had 5 catches for 109 yards and once again did a good job as a blocker.

Rob Gronkowski is still far from himself physically. Although he played more this week, logging 41 of 58 offensive snaps, he went out on passing routes just a dozen times and Brissett looked his way just twice, completing one for 11 yards. We’ll look for him to begin getting more involved with the offense in the coming weeks.

Offensive Line: C-
The Patriots offensive line entered this game on an uptick, having played well in the first three games but this week the unit collectively took a step back. They weren’t able to establish their will in the running game and the pass protection for Brissett was not great either. Buffalo’s front controlled the line of scrimmage in this one.

The Patriots rushed 22 times for 90 yards which was good for a 4.1-yard average but the ground game wasn’t the factor the team needed it to be and it was a full 60 yards below their season average.

Brissett was sacked three times but was harassed and hurried often, taking some big hits when he was releasing the ball.

Defensive Line: C-
The Patriots defensive line was far from the stellar unit that thrashed Houston. The Bills ran 32 times for 134 yards (4.2 Avg) but it was how they ran that was particularly galling for Bill Belichick. The Patriots were frequently in the position to hold LeSean McCoy and Tyrod Taylor to no gains or a loss and failed to make the stop. The tackling was atrocious for the most part.

The pass rush was virtually non-existent on Sunday; Taylor was allowed to get much too comfortable in the pocket as there was no push from the front four. Buffalo’s OL dictated the pace and they moved up and down the field all day long.

Linebackers: B-
Jamie Collins had six tackles including one for a loss in the backfield but he wasn’t the factor that he was a week ago. The coaches didn’t use him in many blitz situations which was a mistake considering the time Taylor had to throw.

Dont’a Hightower returned to action after missing the last two games and had a mixed bag on the day. He made eight tackles, had a pass defensed as well as a QB hit. Matt Patricia finally dialed up a blitz and Hightower shot up the A-gap on a looping inside move where he leveled Taylor just as he was releasing the ball, causing it to go incomplete. He had a couple of missed tackles on McCoy that he’d probably love to have back.

Jonathan Freeny didn’t show up on the scoresheet nor on the field, he badly overran a McCoy run on the Bills first series, allowing him to cut back and go for a nice gain.

Secondary: D
The secondary in particular Logan Ryan was picked on all day long by the Bills. Against an uninspiring group of wide receivers, the Patriots played soft and tentative and made this group led by a scuffling QB look like a well-oiled machine. Taylor had more yards passing in the first half than he’s been averaging a game.

They tightened things up in the second half, but by then the damage was done and the team was down by two scores. On a day where it seemed that the defense was going to be asked to carry the day, they failed.

Special Teams: D
Punter Ryan Allen is the only reason this unit doesn’t fail. Allen, along with Bennett were the best two Patriots players on the field. He did another fantastic job on his punting booming six for an average of 52.2.

Stephen Gostkowski shanked a very makeable field goal and it came at a time when the team had just held Buffalo to a three and out to start the second half. The offense moved down the field and with a chance to claw back into the game, he missed the kick, removing any momentum, that they had generated in the opening minutes.

Cyrus Jones? He made two boneheaded plays in the opening quarter, receiving the opening kickoff, he started out of the end zone, and stopped, thinking about taking a knee. Except he was already out. He got swarmed at the nine-yard line. On the next kick, he tried atoning for that by running it out from five yards deep. He made it to the 14 saddling Brissett once again with lousy field position. To cap off the day, he muffed another punt in the last minute of the game….ugly game rookie.

Coaches: D
Bill Belichick had 10 days to prepare for this game and the team wasn’t ready to go. They came out flat, made too many mistakes and played uninspired football. The game plan was to limit the offense around Brissett and rely on the defense to do the job. But Matt Patricia’s players were not having a good day.

By the time they made adjustments in the third quarter they were down 13 points, which is nothing if you have Brady, but a mountain for Brissett to climb. Belichick was steaming after the game…he should have been. This wasn’t one of his better moments, especially being outcoached by Mr. Blowhard himself who rushed to the microphones to announce that the Bills had a spy inside New England’s locker room.