6 years ago at 6:05 am ET
Follow @SteveB7SFG
Posted Under: Patriots Commentary

Michael Irvin May Be Onto Something

Bill O’Brien is a really good coach. And he’s surrounded himself with a very good staff and football team. They will no doubt be a playoff team in 2016 and will probably win their division again. But they, as a unit got taken to the woodshed on Thursday night by Bill Belichick and the Patriots as New England dominated in all four phases of the game, offense, defense, special teams and coaching in a 27-0 win on Thursday Night.

The Patriots were led by rookie QB Jacoby Brissett who ran for a 27-yard touchdown, LeGarrett Blount who turned in another 100-yard performance with a pair of touchdown runs, a fantastic performance by their special teams who caused two huge turnovers and a stifling defense, the Patriots improved to 3-0.

New England came in short-handed and Houston was actually favored in this one. With Tom Brady, Rob Ninkovich, Dion Lewis, Dont’a Hightower out and Rob Gronkowski just easing his way back on the field, Houston saw an opportunity to wrest control of the AFC with a signature win. Even backup QB Jimmy Garoppolo was out with a shoulder injury, prompting 3rd string rookie Brissett to start his first game. Instead, the Texans fly back to Houston wondering what the heck happened again as they were smoked badly.

Belichick on a very short week, came up with a masterful game plan that played to the strengths of his young QB and made his transition and throws easier. They leaned on their running game and veteran LeGarrette Blount. He also did what he always does, he took away Houston’s biggest weapons on offense and defense and forced you to beat him somewhere else with different players.

After a near melt-down by the secondary on Sunday, all the hand-wringing over what the talented Houston wide receivers would do on Thursday went for naught. The Patriots played a two-deep safety look against the Texans, essentially bracketing their talented pair of WRs in DeAndre Hopkins and Will Fuller with the cornerbacks covering underneath and safeties over the top.

As a result, the Texans penchant for throwing the ball deep was taken away right off the bat. The Patriots dared the Texans to run and then did a great job of stuffing them when they tried to take advantage. The defense frustrated and harassed QB Brock Osweiler who finished with the pedestrian numbers of 27 of 41 for 192 yards, 0 TDs, and 1 interception. Hopkins was blanketed by Logan Ryan all night and made just 4 catches for 56 yards. All of which were contested and forced him to make some acrobatic catches.

Houston didn’t even enter Patriots territory until there were less than a minute and a half left in the third quarter. They never seriously threatened to score as the Pats, playing outstanding team defense, stymied and frustrated them time and again.

On defense, J.J. Watt, Whitney Merciless, and Jadeveon Clowney were all relegated to a milk carton as they were missing all night. Houston’s best player on defense was former Patriot Vince Wilfork who was a force in run support.

Houston’s STs, as we pointed out in our keys to the game, was a problem area and the Patriots exploited them causing two turnovers that turned into points. The first, after a Pats FG, came on the ensuing kickoff. Brandon Bolden ripped the ball loose from Charles James and Duron Harmon recovered. Brissett two plays later ran a bootleg around the right side as Watt crashed inside into thin air and the rookie waltzed in for a score to make it 10-0. Punter Ryan Allen had one of his best games in a Patriots uniform. He downed punts inside the Texans 15-yard yard line six times and averaged 47.2 yards per punt.

O’Brien and Osweiler should have recognized what Belichick was doing to them defensively and opted to take the patient approach. There was room underneath for the Texans to work the ball to the tight ends and backs. They weren’t going to find any kind of room for those deep chunk passes down the field. But they continued to force the ball into tighter and tighter windows and Osweiler threw his fourth pick of the season. He tried to force a pass into double coverage and Jamie Collins picked him off for his second INT in two weeks.

Brissett Does His Job: What can you say about the rookie QB’s baptism of fire on Thursday night? His passing numbers weren’t eye-popping, 11-19 for 103 yards, and added eight runs for 48 yards and a score but he did what the coaches asked of him. And most importantly he didn’t turn the ball over. He showed remarkable poise for a young player who got very little work during training camp and the preseason. 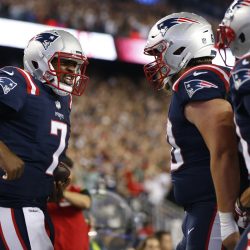 Belichick’s mantra to his young QB all week was don’t give the ball to them (Texans), keep it for us. So after his 27-yard touchdown run, Brissett wanted to show the coach he indeed was following the game plan and trotted off the field and promptly handed the ball to Belichick. The coach made sure that the ball found its way back to the QB.

“He’s just a hard-working kid that is really dedicated to doing what’s right for the team and trying to improve on anything that you tell him,” Belichick said. He just wants to do what the coach tells him to do. I’m glad we have him. Yeah, I was just holding the ball for him. That’s his ball. That’s his first touchdown ball, so that’ll go up in his trophy case.”

Blount Answers the Bell Again: Is there a guy happier to be in New England more so than the Patriots big running back? It is debatable. But just four days after carrying the rock 29 times against Miami, Blount carried it 24 more times for 105 yards and a pair of touchdowns.

Just like Sunday, Blount’s runs in the first half didn’t net much in the way of yardage. He gained just 11-yards on seven rushes in the first 30 minutes. But those runs bear fruit in the second half. Houston’s defense is tough but not deep and the more Blount rushed, the better he got. His second half numbers, 17 carries for 94 yards and two scores. The second of which was a classic Blount breaking free and racing 41 yards to put the game away.

In Brady’s Goodell-enforced absence, we thought the Patriots would lean on the running game and Blount to ease the onus on the QBs. Thru three games, Blount has carried the ball 75 times for 298 yards and four touchdowns. Mission accomplished. He’s earned himself some ice-tub time this weekend.

This is the defense envisioned this summer: What a great overall performance by the Patriots defense. After an admittedly bad second half against Miami, they faced the team that throws the ball deep more than any other team. What did Houston do in the deep passing game? Nada, zilch, nothing. No chunk plays of 20+ yards downfield.

The corners, Logan Ryan and Malcolm Butler contested everything and even when Osweiler completed a pass to Hopkins or Fuller, they were contested and there were zero yards after the catch.

In our players to watch piece, we highlighted Jabaal Sheard and said he was due for a breakout game. He notched a pair of sacks and had his best overall game of the season. Jamie Collins had a tremendous effort as well even without Hightower beside him at linebacker. They limited RB Lamar Miller as he was really ineffective at key points of the game. He did end up with 80 yards but many came in garbage time when the outcome was no longer in doubt.

Earlier this week, Michael Irvin from the NFL Network said that if the Patriots beat the Texans on Thursday night with their 3rd string QB that he’d change the names on his Lombardi Super Bowl trophies to Belichick. While a tad premature, maybe Irvin better get that engraver on speed dial.

So the Patriots are (right now), the only 3-0 team in the NFL. They’ll enjoy this victory over the weekend and on Monday, get right back to work. Rex Ryan and the Bills come to town next weekend. We’re on to Buffalo.