6 years ago at 6:37 am ET
Follow @SteveB7SFG
Posted Under: Patriots Commentary 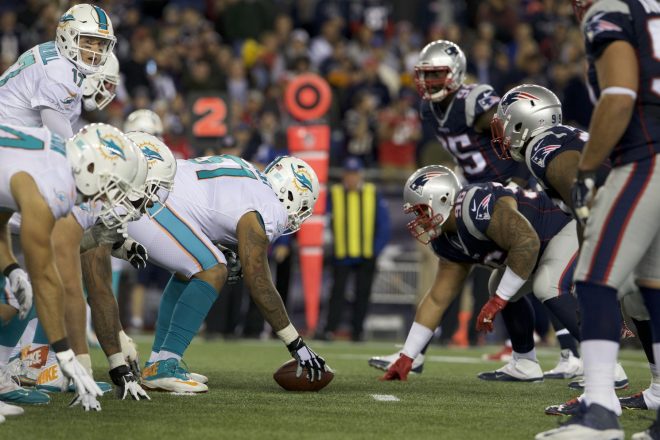 The New England Patriots will play their home opener of the 2016 NFL season at Gillette Stadium against the Miami Dolphins on Sunday at 1 p.m.

The game will be televised by CBS and can be seen locally on WBZ with Greg Gumble and Trent Green handling the play-by-play and analysis duties. Jamie Erdahl will work the sidelines. The game will also be aired on the Patriots flagship radio station 98.5 The SportsHub with Bob Socci and Scott Zolak on the call, produced by Marc Capello.

The Patriots (1-0) defeated the Arizona Cardinals 23-21 on Sunday Night Football as Jimmy Garoppolo was impressive in his first NFL start throwing for 264 yards and a touchdown. LeGarrette Blount ran for 70 yards and a touchdown. Arizona’s Chandler Catanzaro missed a 47-yard field goal with under a minute to go.

The Dolphins (0-1) lost to the Seattle Seahawks 12-6 when Russell Wilson connected with Doug Baldwin for a game-winning touchdown pass with less than a minute to go. Miami had chances to win with a field goal being blocked, a fourth and inches attempt failing from the Seattle 17-yard line and Kenny Stills dropping a sure-fire 71-yard score.

Series History:
The Patriots and Dolphins will be meeting for the 102nd time with Miami holding an all-time 53-48 edge. The Patriots hold the all-time edge in home games 33-18 and hold a sizable advantage at Gillette Stadium where they are 12-2. The last three years have seen the series split along home lines with each team holding serve on their home field.

The Patriots crushed Miami 36-7 in Gillette and Miami dominated in a 20-10 win in the final regular season game of 2015.