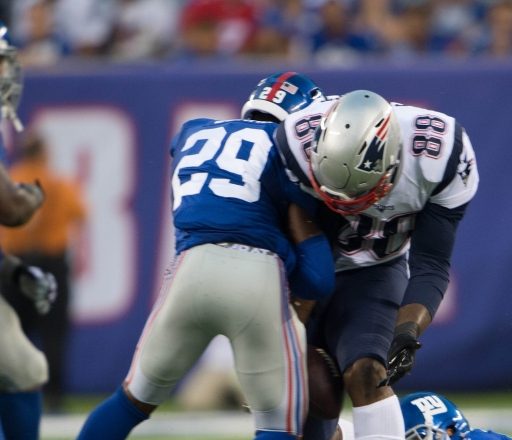 Bears Explain Their Love For LeBlanc – Defensive back Cre’Von LeBlanc played pretty well during his time in New England and showed a lot of potential, but apparently he left enough of an impression with the Chicago Bears where they decided they wanted to bring him to the Windy City.

After being waived by the Patriots on Saturday, the Bears claimed the former undrafted free agent, and by the sounds of things they seem to be excited about the type of player he could end up being in this league.

“He’s a guy that our college scouts liked coming out in the process and he’s a guy obviously in the preseason that just jumped out,” Bears general manager Ryan Pace said via Mike Reiss of ESPN Boston Monday. “He’s a bit undersized (5-9, 194), but he’s extremely sudden, he’s very sticky in mirroring routes and he’s got excellent ball skills. He just has a knack for going and getting the ball. And that’s been an emphasis on our defense right now.  Something that we want to improve on is ball skills and he definitely has that and that’s why he’s here.”

The Bears are in need of turning things around and improving their secondary is certainly a good place to start.  The Bears were ranked 27th in the NFL in passing yards given up per game last season, which should hopefully mean there will be a shot for LeBlanc to compete for a role. He joins a Bears club who had zero undrafted free agents make the roster, and it’s a opportunity for him to play his way into the line-up considering the injuries Chicago is dealing with at cornerback.

As a result it looks like a great fit, so hopefully he takes advantage of it.

The team is reportedly going to head out on Friday, one day sooner than their normal routine of flying out Saturday for an opponent.  Given the weather and time zone difference (the game kicks off at 5:30pm local time), it makes sense for New England to try and get acclimated as they prepare to face a tough Cardinals team without Tom Brady.

Newcomer Chris Hogan is for the move, saying that having the additional time allows players a chance to recover and prepare after flying across the country.

“Obviously it’s a long flight out there, so there is a lot of recovery time that you need, sitting on a plane, so it’s good to get out there on Friday and have all of Saturday to get loose again with a little walk-through,” Hogan told ESPN. “Sitting on a plane for six hours, especially for those big guys, that’s a long time.” 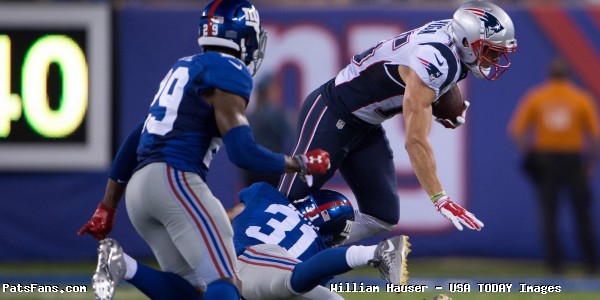 Chris Hogan is excited for 2016 to get started. (USA TODAY Images)

Hogan Excited About First Season With Patriots – Speaking of Hogan, he got better as the preseason went on and seemed like he was finally starting to settle into the offense, and it sounds like he’s planning to put together a strong season now that the team is ready to start playing some meaningful games.

Hogan, who finished third in receiving with 12 catches for 137 yards and a touchdown during the preseason, is part of a receiving core that has both Julian Edelman and Danny Amendola coming off of injuries, which seemingly opens up an opportunity for him to take on a bigger role to begin the year as they continue getting ready for the Cardinals.

It’s an opportunity that he’s planning on making the most of, and Hogan told the Providence Journal on Monday that he’s excited to get started.

“Excited, I think, would be putting it mildly. I’m really excited to get this season underway,” Hogan told the newspaper. “This is when it counts. The preseason was fun for me being out there with the team and playing with these guys. I’ll be more than excited now to get out there and play in the regular season.”

Jones’ Locker Sets High Expectations – It’s bad enough that Cyrus Jones is wearing a number belonging to some pretty talented players in Patriots’ history, but Jones is also taking up shop in a space that was last occupied by another player responsible for helping them win their most recent championship.

Comcast Sports New England points out that Jones is now taking up shop in former cornerback Darrelle Revis’ locker, which is a reminder of the type of player that he could be if he works hard enough.  Both Revis and Patriots Hall of Famer Ty Law also wore Jones’ number 24 jersey, so he finds himself in the unique spot of already having a high bar to live up to given those circumstances.

But Jones is just trying to establish himself as a player in this league, and he did a decent job during the preseason, handling the majority of the punt return duties for the team.  He returned 7 punts for 143 yards, one of which went for 60 yards.  He also finished with 8 tackles as well as an interception, and also recovered a fumble.

As for his spot in the locker room, he’s just looking forward to the chance to earn the respect of the guys around him as he begins writing his own NFL story with his new football team.

“As a rookie coming in, when you get drafted, you’re wondering where you’re going to be,” Jones said via CSNNE.com. “How’s the locker-room situation going to be? How are the older guys going to accept you? That’s a big thing.”

“I think it’s taken for granted how important that is for a young guy coming in, just making that transition. The more the older guys accept you and welcome you into the group, the easier and smoother it is for you to kind of make that transition. I’m blessed to have guys like this to be around and have as my teammates and guys to look up to.”

Versatility Was the Key in Harbor Sticking – It was a tough preseason for tight end Clay Harbor, who seemed like he might have been a player who could have fallen victim to the numbers game that is the NFL.

After an injury set him back early on in training camp, he had a quiet preaseason in terms of his numbers and sort of flew under the radar while A.J. Derby went out and put up a team-leading 15 receptions for 189 yards and a touchdown.

But one thing that doesn’t show up on the stat sheet is Harbor’s blocking ability or his experience. Given the importance the Patriots place on the tight end position, it seems like this season they’re trying to make sure they have a well-rounded group to weather any injuries that they might face, which has been an issue in past years.

Harbor’s versatility was something Belichick spoke highly of on Monday, saying that one thing Harbor has going for him is his special teams ability, as well as the fact the veteran gives the Patriots some additional options in their passing game. Those are all terrific attributes that this year’s team, especially while having to battle without Brady, can certainly use as they continue getting ready to begin the season.

“Clay has got good versatility for us,” said Belichick. “Clay is in the kicking game and offensively has a combination of blocking skills, receiving skills. He has some experience playing in the backfield as well as on the line of scrimmage. So, he is a guy that can do some different things for us. He’s not just pigeonholed into one particular spot but certainly his value in the kicking game I’d say as the backup tight end is valuable along with his offensive skills. So, that definitely helps him.”