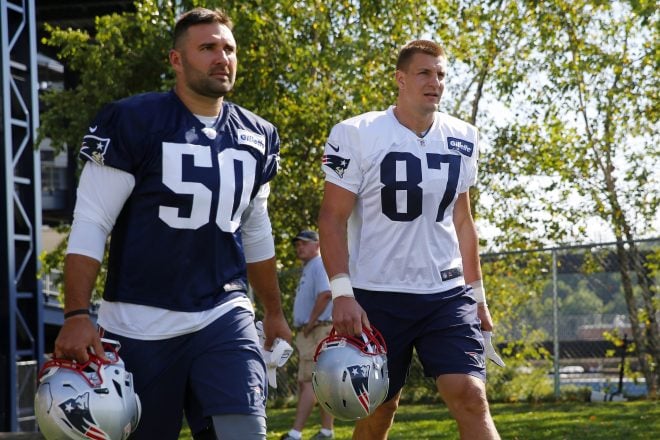 Iron Man for the Patriots Banged up for the first time

Rob Ninkovich can be excused if he’s feeling a little testy. He’s experiencing something completely new to him on the Patriots. It’s the first time he’s been injured as a member of the team.

Since arriving with the Patriots in 2009, he’s been one of the Iron Men of the NFL. He played 15 games that first season and since 2010, he hasn’t missed a game playing in every contest and while racking up some incredible percentages of defensive snaps played on the way.

Ninkovich is one of only 25 players to play in all 96 games during that span. A sign of his toughness and durability. He’s always able to answer the bell.

He spoke with the members of the media for the first time since his injury and his frustration was plain to see with having to miss valuable practice time. At first, he was reluctant to even speak. When reporters began to question him, he tried to pass them off to his teammate in the next stall, Chris Long. “Look, guys, it’s Chris Long,” he said drawing a laugh from the media.

“I’m just working as hard as I can, rehabbing, trying to get back as soon as I can,” he said. “I’m going to continue to work hard and see how I feel.”

Ninkovich tore his triceps during a joint practice with the Saints on August 9. And he was had to sit out quite a bit of time for the first time since he was a rookie with New Orleans. His injury is expected to keep him out of game action until October which will break his consecutive game streak.

Ninkovich amazingly was back on the field less than a week after getting hurt, wearing a protective sleeve on his upper arm. But he’s not able to participate in any positional or team drills. Asked about the mental side of the game, he said that it is one aspect he’s keeping up with.

“You can watch the tape, you watch practice, you watch the game film and do the best you can to try to absorb what’s going on,” Ninkovich said. “You put yourself out there. It’s just something you have to do.”

Asked when he may be ready for game action, he bristled ever so slightly before saying “I’m just going to try to take it day by day,” he said.

“As a football player, you’ve got to run around and use your legs,” he said. “I’m running around and keeping my wind.”

Ninkovich isn’t the only defensive end on the shelf right now. Jabaal Sheard and Shea McClellin did not play in Thursday’s preseason game against the Bears. Between them, they’re three of the top four edge rushers for the Patriots. Chris Long and Trey Flowers took the brunt of the first team snaps against the Bears with Geneo Grissom and Rufus Johnson both seeing significant playing time.

One bit of encouraging news was that both McClellin and Sheard were spotted in the Patriots locker room on Sunday afternoon and that both were walking limp free with no braces of any kind visible. So hopefully they’ll both return to action soon.

As for Ninkovich, he’ll still be on the field for the warmups and then do some conditioning with the training staff and helping the younger guys in the film room. The Patriots Iron Man may not be able to play this week in Carolina, but his presence will be felt by his teammates.

Check out a clip from Sunday here: