As we head into training camp this week, we look at some of the bigger storylines surrounding several players and in today’s edition we look at Patriots receiver, Julian Edelman.

Through Week 10 Julian Edelman was on a roll last season, having hauled in 57 passes for 639 yards and 7 touchdowns, which matched teammate Rob Gronkowski’s scoring total.  He also had a team-leading 34 first downs, and was the highest targeted receiver with 83 targets, 15 more than Gronk’s total of 68.

The offense was moving at a terrific clip, with Brady completing 60% of his passes down in the red zone, including 18 touchdowns, five of which went to Edelman, with the veteran receiver also tying Gronk in that category.  Brady was also 10-of-16 when targeting Edelman, with Edelman leading the team with 10 receptions in scoring territory, two ahead of Gronkowski (8-of-15).

The moral of the story is the fact that with Edelman paired with Gronkowski, this offense was in high-gear and was part of the reason they were already 8-0 heading into their match-up down in New York against the Giants.  The Patriots managed to improve to 9-0, but during the win the Patriots lost Edelman to a fractured foot, which ended up being significant blow to their season and it started a downward trend. 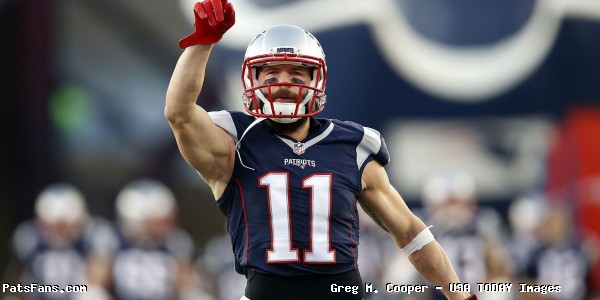 Edelman is one of the key storylines heading into 2016. (USA TODAY Images)

Brandon LaFell was a mess through much of the season, and Edelman’s loss, coupled with Dion Lewis’ injury, suddenly changed the complexion of New England’s offense.  When Edelman is out there and paired with Gronkowski, it sets up match-up nightmares for opposing teams who no longer have the luxury of being able to double one of them since the other could make them pay with one-on-one match-ups, which also made Danny Amendola’s production better. Looking closer, Amendola was 30-of-37 (81%) before Edelman went down, compared to 25-of-39 (64%) after he went down. As a result, numbers like these really show how much Edelman’s presence in the Patriots’ passing game helps make guys around him even more productive.

By the time he came back for the postseason, he was immediately a difference-maker against the Chiefs but after reaggravating his foot injury, he was noticeably slowed in Denver during the team’s eventual loss to the Broncos.

Foot injuries among wide receivers are one of the most difficult injuries to come back from, and Edelman’s feet are one of the biggest reasons he’s emerged as such an important member of this football team.

His quick feet in the passing and punt return game have made the Patriots’ receiver one of the most explosive players in the league, and one of the most important storylines of this season is going to be his overall health in 2016.  When Gronkowski was having all of his injury issues, it was easy to over value Gronkowski’s importance while undervaluing what Edelman did.  But 2015 gave fans a glimpse of how much of an impact player Edelman really is in terms of not just his own production, but the opportunities he creates for others thanks to the type of threat he is.

All indications and reports have seemed to point to Edelman being ready to go by the time the team kicks off in September, but how his foot responds to the rigors of how he plays the game is going to be one of the biggest things to watch this season.  You don’t have to look any further back than the 2014 postseason to realize what a key member of the offense he is. He’s reportedly been placed on the physically unable to perform list to start camp, which isn’t a surprise given how careful they’ll likely be with him to make sure he doesn’t suffer any setbacks.

Once he does return, how the team handles the number of reps in the early part of the season and his snaps during games will likely going to be one of the biggest things to keep an eye on as they try to make sure he’s completely healthy throughout 2016.