From all of us here we hope everyone has a happy and safe Fourth of July weekend.

Fun fact: Now that we’re in July and training camp is just a few weeks away, July will be the last month with no football games until after next year and the Super Bowl.

Are Pats Fans Paranoid? After the Richardson Suspension by the NFL, One Must Wonder with the League’s Latest Head Scratcher:
Plenty of Patriots fans were left shaking their heads at the lack of consistency with the NFL and Roger Goodell’s system of punishment.

The Jets’ Sheldon Richardson was suspended under the personal conduct policy of the league for just one game after he led police on a high-speed chase where his car reached speeds of 143 mph with a minor in the car.

Richardson will miss the Jets opener but be available for the second game of the season, a Monday Night Football tilt against the Bills. He missed the first four games of 2015 for violating the league’s substance-abuse policy.

After he was arrested for resisting arrest, police detected a “strong odor of marijuana” in the car. He pleaded guilty to four lesser charges and was fined $1050 and sentenced to 100 hours of community service and two years of probation. Child endangerment and drug possession charges were dropped.

Meanwhile, Patriots QB Tom Brady faces the first four games of 2016 being suspended for the bovine excrement that was the Wells Report and Deflategate. An equipment violation that in the past was the source of a $25,000 fine or a not-so-strongly worded letter. 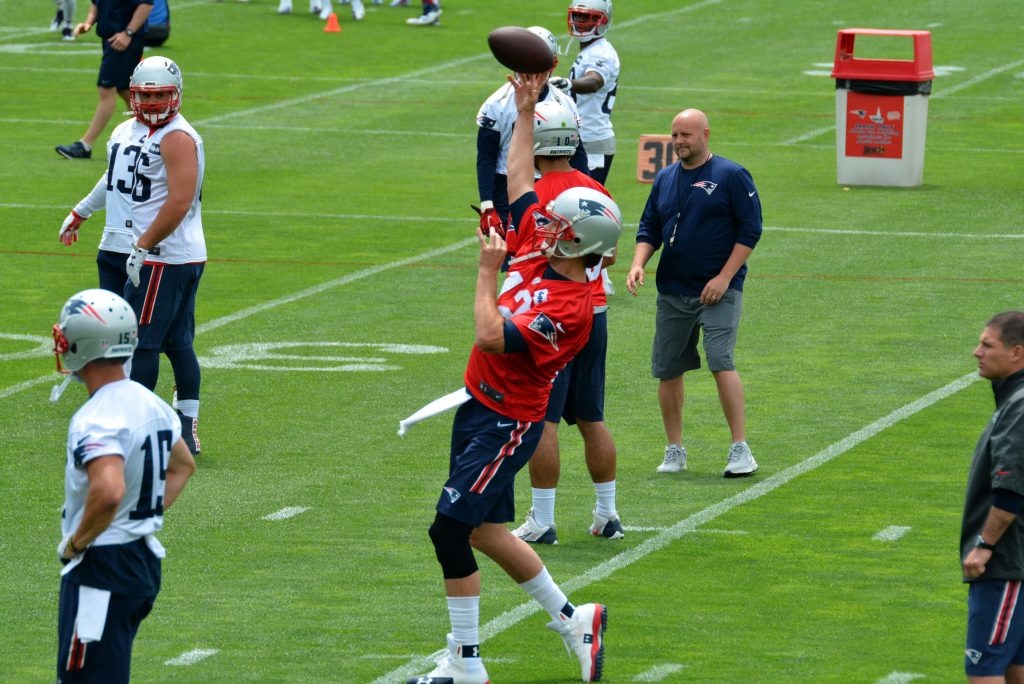 And the beat goes on… well speaking of the Commish>>>

Goodell Takes “Paycut” to $32 Million in 2015:
Pro Football Talk reported this week that the NFL released its financials for 2015 and that for the fourth year in a row, Commissioner Roger Goodell’s went down but he’s hardly starving. The league paid NE’s least favorite red-head the tidy sum of $32 million last year down from $34 million in 2014.

While most fans in New England would like to see that number drop to zero, the bottom line in the NFL is the almighty dollar and the shield is raking it in. His compensation is mainly tied to revenue, so with a $32 million-dollar salary the owners are really doing well as evidenced by the Commissioner’s pay.

Despite trading away Chandler Jones and losing Akiem Ayers in free agency, the Patriots defensive line is deep entering the 2016.

The flexibility and versatility that they have make this group one of the ones to watch for training camp and into the regular season. With a core group inside of Malcom Brown, Alan Branch, Terrance Knighton and Vincent Valentine, the remaining big men (Markus Kuhn, Frank Kearse, Anthony Johnson, Joe Vellano, and Woodrow Hamilton), will have a tough time making the roster.

But on the edge is where they have an intriguing group. Jabaal Sheard, Rob Ninkovich, Chris Long, Trey Flowers and Geneo Grissom give them plenty of options to set the edge, rush the passer and kick inside as an interior pass rusher.

While Long looks to reignite a career derailed by injury the past two seasons, it is Sheard who bears the closest scrutiny. He was the Patriots best edge player in 2015 despite playing far fewer snaps than Jones. He’s excellent at setting the edge in the running game and was very effective at rushing the passer. The team will look to him to provide even more of that this year. 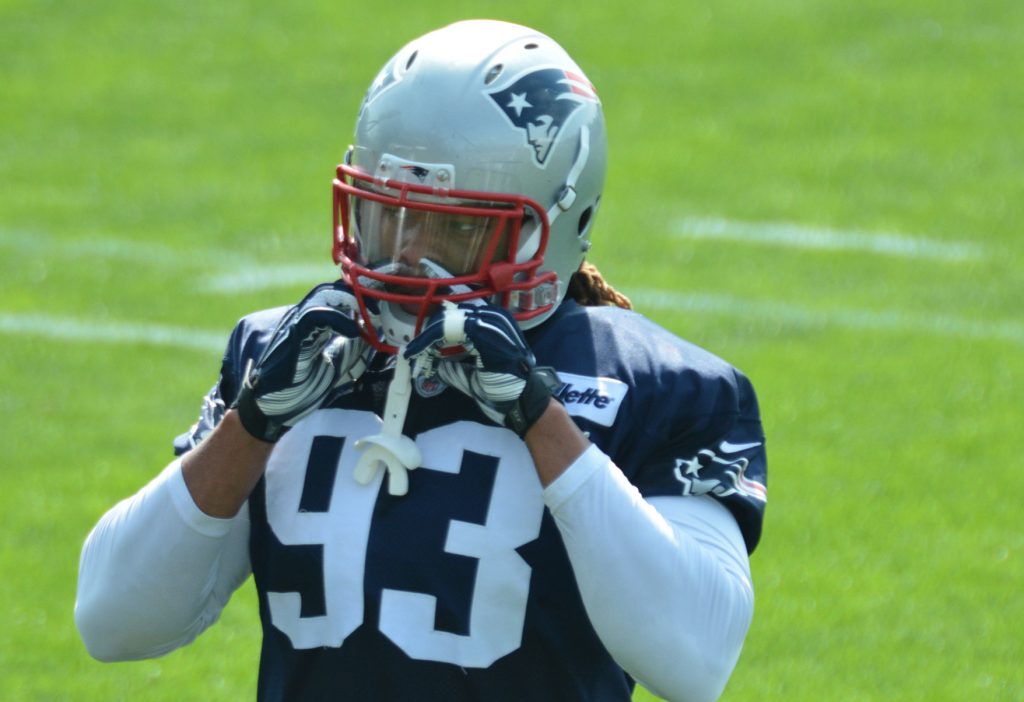 Logan Ryan Gives Back, Helping Homeless Dogs:
New England CB Logan Ryan was the subject of a nice column on Patriots.com on how he helps homeless dogs find forever homes. Doing community service is an underrated if very important task while a member of the Patriots. Ryan has embraced his charity and each month highlights a new dog that needs a home.

He and his girlfriend got into this particular cause after adopting a dog and finding out the need for loving homes as well as the mistreatment that many dogs suffer. To find out how you can help Ryan’s cause see the link here:

We’re also involved with an Animal Rescue service here in Massachusetts. Odie’s Place Animal Rescue is located in Southeastern Mass. Brian and Kerrie Harrington do a fantastic job of rescuing, bringing back to health and finding new homes for homeless dogs. They always have a roster of beautiful animals looking for a permanent home. Check out their Facebook page here:

The big guy, likes to have fun and plays as hard as he works. His work ethic is one reason why the team isn’t cracking down on the celebrity tight end who reminds fans of the “kid they knew back in high school”.  He’s the lovable goofball who’s strong enough to throw you out of the club…. right Sergio Brown?

But when he sat down with Access Hollywood, Gronk’s feelings about Tom Brady’s suspension came out and he was 100 percent with Ben Affleck’s rant on the Bill Simmons show.

“He (Affleck) was passionate… I loved it. Couldn’t agree with him anymore.”

When pressed further, Gronk admitted that Affleck’s rant was sometimes how he feels but is constrained by league rules. “To tell you the truth, that’s how I really want to talk about it, too. We just can’t go on air as an athlete and say all that. I can’t just go do that. But Ben Affleck basically just said it how I want to say it. So he did a great job. … Us as athletes [and] NFL players can’t just go out there in the media and start dropping F-bombs everywhere. … You get fined for press conferences, for criticizing people. So you can’t really do it. You have to keep it professional.”

Dolphins to Improve Fan’s Experience at Training Camp:
With the improvements being made at the Miami Dolphins stadium this year, the team has also announced that they’re adding to the fan’s enjoyment for training camp.

Dolphins.com announced this week that among the new amenities for the fans will feature a brand new canopy over the seated area, providing fans with shade from the blistering Florida sun. A new children’s area for fans 12 years old and younger will provide them with special access to get player’s autographs after practice. In addition, weekend practices will feature food trucks, inflatables and fun-filled games for fans and families.

Practice times were announced and the Dolphins will start earlier due to the heat with open sessions beginning at either 8:35 or 9:00 a.m. The only drawback is that practices are open to only 2000 people and fans must reserve tickets off the team’s website.

Jets’ Forte Comes to the Aid of Jay Cutler:
New Jets running back Matt Forte was asked about his former QB in Jay Cutler by Pro Football Weekly this week. But unlike WR Brandon Marshall who joined the Jets a year ago and criticized the Bears’ QB, Forte came to his defense.

“I feel bad for him because the cameras are constantly on him,” Forte said.

“They show his body language, and I mean, if you look on the sideline and something goes bad, everybody’s body language is that way. He’s the quarterback. He’s the one in the spotlight.”

Forte believes that Cutler gets a raw deal and that he’s not the same player he was when arriving in Chicago. “In the media, that’s the thing to pick on. That’s the thing that sells papers, so that’s what they’re gonna pick on,” Forte added. “That’s what they’re gonna write about no matter what he says. I’ve seen him grow from when he came in, it was my second year, all the way till now.”

With Forte getting a fresh start with the Jets, those words will undoubtedly resonate very well in the Jets locker room as he’s a player that will have a teammate’s back.

Rex Ryan, Bills Out to Honor Buddy Ryan’s Legacy:
Bills Head Coach Rex Ryan and his brother Rob lost their father this week. Buddy Ryan, the architect of the Bears “46 Defense” that they rode to a Super Bowl championship, passed away at the age of 82. Now Ryan is looking to dedicate this season to his dad’s legacy.

Ryan sat down with MMQB this week and spoke about his father, his legacy and his impact on the game.

“This season means a hell of a lot to us. Our name, our legacy, means a hell of a lot,” Ryan said. “Our dad is recognized as being one of the great defensive coaches, probably arguably the best, in the history of the game. You can’t say he’s not in the top five, certainly.”

“And we’ve been pretty successful through the years ourselves, but nothing like we want to be. We have won five Super Bowls as a family, but we want to win our sixth at some point. And I want to win it as a head coach because that has never been done in our family,” Ryan added.

“Obviously, it’s not like these teams are going to roll down for us. We have to earn everything we get, and we’re a long-a** way away from it. It’s going to take a ton of work. But I really like my team.”

All photos used in this article are property of PatsFans.com