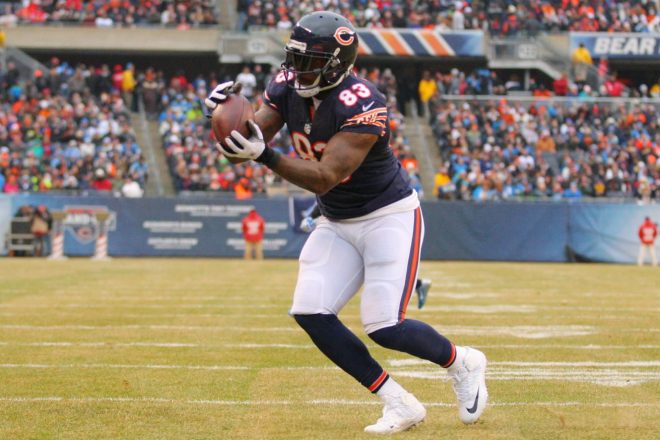 A quiet morning on this Thursday, but here’s a look at some of the top stories.

Forbes’ Petersel drooling over prospect of Bennett & Gronk – Forbes.com contributor Zach Petersel took a look at who he feels are the X-Factors heading into the 2016 for New England, and there was one player who really stood out that he can’t wait to see how he fits in.

Martellus Bennett’s addition to the team is one that he finds as the most interesting, especially given how dangerous he feels Bennett should be paired with teammate Rob Gronkowski.

Obviously most fans remember how lethal Aaron Hernandez could have been as a double threat when the two players began coming into their own before we learned about the dark side of Hernandez off the field, but Petersel views this tandem of Gronkowski and Bennett as potentially one of the more dynamic ones in football.

“Pairing Bennett with Gronkowski gives New England the only tight end duo with 900+ receiving yard seasons. They’re both 6’6″, 270-Lb athletic monsters that aren’t just valuable assets as receivers but hold up their end in the run game, unlike someone like Jimmy Graham. Combining Bennett with a healthy Julian Edelman and the former Bill Chris Hogan should give defenses nightmares while allowing Jimmy Garoppolo to ease into the offense filling Tom Brady’s shoes.

I find myself drooling about what Belichick and crew can draw up to take advantage of this setup. When Brady comes back, all bets are off.”

And if Brady is able to win another legal battle against the NFL, those bets may be off beginning in Week 1, which should set up quite a show to kick off the season. 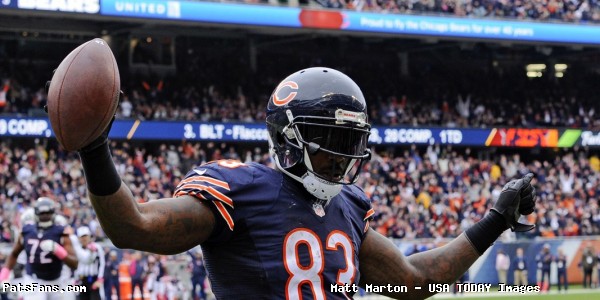 Bennett has a chance to shine brighter than he did in Chicago. (USA TODAY Images)


Teams Using Beeping Balls to Stop Fumbles – The NFL is no stranger when it comes to embracing technology to try and improve different parts of the game, and they’re employing a new training method to help players better hold onto the football.

Stephen Whyno of the Associated Press reports that the Washington Redskins are one of five NFL teams using beeping footballs to emphasize ball security.  When the ball is being held correctly with the five fundamental points of pressure, the football beeps at about 80 decibels to signal to the player carrying the ball that he’s holding it correctly.

The idea was developed by Division II Northwood University assistant coach Tom Crueger and right now it’s reportedly being used by not only the Redskins at the NFL level, but also the Dallas Cowboys, Indianapolis Colts, Baltimore Ravens and the Tampa Bay Buccaneers, while the San Diego Chargers are said to be planning on using them at the start of their training camp.

“It basically reinforces the proper hold by teaching the athlete to put their forearm to the panel, their panel to the chest and to compress the ball evenly with equal distribution of pressure, therefore creating basically a vice around the football, creating that muscle memory of what it feels like to have the ball secured to their body at all times,” Creguer told the AP in a phone interview.

It’s definitely an interesting concept, and given Bill Belichick’s constant emphasis on ball security, we’ll have to wait and see if the Patriots join the list of teams trying out this method.

Kraft Looking to Buy Site For Soccer Stadium – Patriots owner Robert Kraft has been trying for years to move the New England Revolution to Boston, and it sounds like he may be again looking to make that dream a reality.

According to the Boston Herald, Kraft is in talks with the University of Massachusetts to build a soccer stadium at the former Bayside Expo Center site in Dorchester, which would bring soccer closer to the fans who enjoy following the sport.

The Boston Globe reported on Tuesday that Kraft and UMass are in ongoing discussions, but they don’t appear to be close to a deal.  The report claimed that a deal would entail offering Kraft a long-term lease for the land with the plan to be for Kraft to pay to build the stadium on it.

The new stadium would likely be significantly smaller than Gillette Stadium and would also be used to accommodate additional events.

The University purchased the property back in 2010, with the plan being to expand the UMass Boston campus. This latest attempt follows failed past locations near the city that have included Roxbury, Revere, Somerville, and a previous South Boston attempt.  We’ll have to see if Kraft can get a deal done to finally make this latest attempt a successful one.

Rookies Surprise Children With Hospital Visit – These stories are always great to see, but rookie Joe Thuney’s mention of how impressed he was with the team’s connection with the community stood out after his visit to Boston Children’s Hospital this week.

The rookie admitted that coming to the Patriots he was aware of their connection with the community, but experiencing it completely changed his perception after the rookie joined the rest of the group with a visit to the hospital.

“I always knew the Patriots were a stand-up, great organization, really top notch, but I didn’t know in full detail how deep it went in the community,” Thuney said via Patriots.com. “I feel lucky to be a part of it, and I can’t wait to do more.”

Seeing children battling illnesses is always heartbreaking to begin with, and the Patriots have always put a focus on trying to make a difference given the amount of time players put in not only during the offseason, but on their off days even during the season.  They don’t do it for publicity, as many of the visits don’t even reach the mainstream media.  They do it because there’s no currency that can be placed on the look on each of the faces, with the smiles they see being reward enough for their efforts.

“You realize you can do so much for the community,” said Thuney. “It meant a lot. It’s always great seeing kids’ faces light up when you walk into a room. Just anything we can do to help them get through their day or bring a smile to their face. It’s the least we could do.”

SOCIAL POST OF THE DAY:
Julian Edelman with a visit to MGH:

Thanks to @MGH for letting me come out great kids fun time! pic.twitter.com/Tv9mhM9h3z