6 years ago at 6:28 am ET
Follow @SteveB7SFG
Posted Under: Patriots Commentary 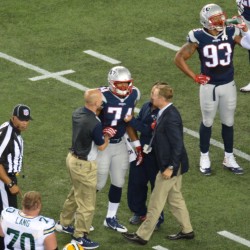 The Patriots are quite deep at the defensive end position heading into 2016. With Rob Ninkovich and Jabaal Sheard penciled in as the starters, they signed Chris Long during free agency and 2nd-year players Geneo Grissom, Rufus Johnson and Trey Flowers will be looking to make that big jump during their sophomore seasons in the system.

Of the younger players, all three had their moments during the early portions of training camp and preseason with Flowers arguably showing the most as he continually turned heads with the ability to beat the blocking on the edge and pressure the quarterback.

During the Patriots first preseason game, he blew around Packers starting left tackle David Bakhtiari and sacked QB Aaron Rodgers. But a concussion injury suffered during that game set him back. Then a combination of knee and shoulder woes slowed his progression. When he returned he wasn’t able to climb back up the depth chart to play meaningful snaps. As a result, he appeared in only one game during his rookie season.

Now in Year 2, Flowers will be looking to pick up where he started last summer.  After being drafted in the 4th Round of the 2015 NFL Draft, Bill Belichick spoke about his strengths to the media.

“He’s an instinctive player,” Belichick said. “We’ve asked him to do a lot of different things. He’s played in the kicking game, which wasn’t something he did at Arkansas. He’s a tough kid. Works really hard. He seems to have a nose and instinct for the ball.”

After the Green Bay game, Belichick was asked about Flowers’ sack of Rodgers and added some additional breakdown. “He plays with good leverage,” Belichick said. “He has longer arms. He uses his hands well and he did that on that play. He showed some acceleration to the quarterback.”

The Patriots are hoping that Long, limited by injury the past two years, will be able to recapture some of his previous production that saw him be one of the better defensive ends in the NFL. So, Flowers, Grissom, and Johnson will be battling it out for the 4th DE spot and be ready to step in if anyone falters or gets injured.

In an attempt to get them on the field more in the preseason, Belichick and Defensive Coordinator Matt Patricia kicked Grissom inside during obvious passing situations but it something Flowers can do as well. With the Patriots, versatility is a big key. Johnson has his own versatile side and can play upright as an outside linebacker. Although when I spoke to him this spring he told me the coaches told him he’d be strictly a defensive end this season.

With the number crunch going to happen with the 53-man roster in September, the more you can do, the better the chances of you sticking to the roster. Although all three players have practice squad eligibility remaining, the Patriots will try to find a spot for all of them if possible.

For Flowers, his path is perhaps the most clear-cut. The 6’2, 265-pound end has the ability to be an impact pass rusher on the edge using his speed and athleticism. He’s a stout run defender and sets the edge very well in the running game and can play either right or left defensive end as well as kick inside as a sub-package interior pass rusher.

He’ll be a player to watch this season once the pads come on. As for his outlook on things, during a players’ charity appearance during the offseason, he had this to say: “I just plan on obviously getting a little more into the game and affecting the game a little more. I’m just looking ahead and trying to get better.”

Flowers spent time in the weight room with the strength and conditioning coaches preparing for his second season. “I’ve been making sure I stay on top of my game as far as skill-set, and also in the playbook and in the film,” Flowers said. “Watching and trying to improve my game that way mentally. It’s all about getting better and improving from year one to year two.”

While he doesn’t have the special teams experience of Grissom, that’s an area where the coaches may want to get him more actively involved this spring and summer and it will be something to look for during the upcoming mini-camp this week.

We had a chance to speak with him last September during the preseason regarding his injuries.