7 years ago at 9:25 am ET
Follow @SteveB7SFG
Posted Under: Patriots Commentary 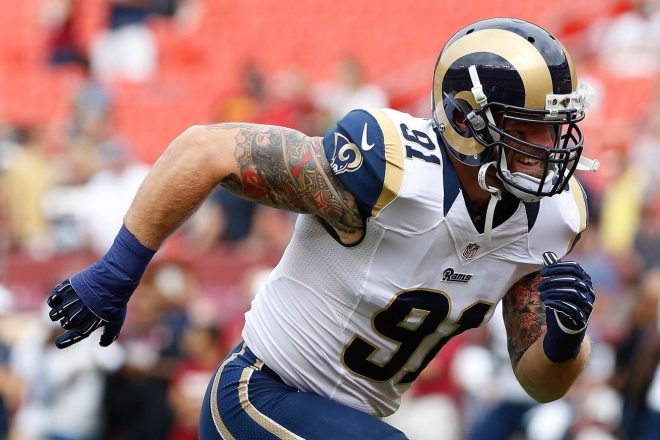 Pats DE-A Big Under the Radar Signing This Spring

The Patriots signed DE Chris Long just hours after trading Chandler Jones to the Arizona Cardinals for G Jonathan Cooper and a 2nd round draft pick. Coincidence? Hardly. It was a smart decision signing a formerly dominant edge rusher looking to reignite his game after suffering two serious injuries in 2014-15.

Long missed 14 games those two lost seasons and was able to generate just four sacks, suffering an ankle injury and later a knee issue. Prior to that, Long, who turned 31 in March had an impressive run from 2010-13 where he generated 41.5 sacks and was one of the more dominant edge rushers in the game.

Long, if he can stay healthy in 2016 is a perfect fit for the Patriots defense in that he is the quintessential Bill Belichick-type player. Smart, competitive, comes from a football background and family, passionate about the game and with an unquenched thirst for winning. That’s one thing Long hasn’t experienced in his NFL career…winning. He’s never tasted the postseason and part of the draw for New England, why he took only a $2.375 million-dollar contract to come here was the opportunity to win.

Long can look to other players who came to New England in the latter stages of their careers and found success with the Patriots. Roman Phifer, Ted Washington, Andre Carter, Mark Anderson, and of course Rodney Harrison were all important cogs on the Patriots defense in years that the team went to the Super Bowl.

Long fits right in with what the Patriots and most importantly Bill Belichick likes in his players. Just ask one of his closest confidantes and fellow coaches has to say.

“The structure of the Patriots is based on players who are passionate about football and competition and winning,” Long’s former college coach and Belichick friend Al Groh said to WEEI’s Chris Price. “They are intense about preparation, and at the same time, they value guys who are good teammates.

“He’s passionate about football and winning, and he loves competition. He prepares relentlessly. Everybody who has ever played with or coached Chris said that they have never had a better teammate,” added Groh.

The Patriots have been stockpiling big, physical players on the interior of the defensive line this spring. With Alan Branch and Malcom Brown already on the roster, the team added Terrance Knighton, Markus Kuhn, Frank Kearse and drafted Vincent Valentine in the 3rd round of the draft. They’re big, immovable objects but aren’t the most dynamic of pass rushers. That’s where the edge rushers come in.

Long is part of half a dozen Patriots defensive ends that the team will carry into OTAs and later into training camp. With Rob Ninkovich and Jabaal Sheard returning, Long won’t be expected to play an inordinate amount of snaps and wear himself down. Rather, he may be tasked with being a sub-package, third down pass rusher.

He could stay fresh, come in on passing situations and play with fire that marked his career that we’ve come to expect since he was the 2nd overall pick in the 2008 NFL Draft from the University of Virginia.

The Patriots also have last year’s draft picks in Geneo Grissom and Trey Flowers as well as Rufus Johnson who played well last summer before ending on IR early last season. With a slew of good edge rushers, the Patriots could also opt with sliding an edge rusher inside on obvious passing downs in a NASCAR package. We’ve seen them do that with Jones and Sheard in the past and with Grissom and Flowers last preseason.

Long at 6’4, 275 could do that, but would probably be best served lining up on the edge. Ninkovich and Sheard should enter training camp as the team’s starters but by adding Long as a pure pass rusher just sounds like a success waiting to happen. And just what is the best news to come out of Long and the Pats since his signing? Silence.

Nary a word has been spoken from Long nor about him since he’s signed on. I am sure that’s fine with Belichick. But for Long, it is just a sign that he’s putting in the work and getting ready to fill a role for the Patriots that will hopefully take him thru 16 games and beyond this season.

Uncharted waters for the veteran, but he can look to those other vets who came to New England and found success as well. He’s taken over Jones’ old number, #95 on the Pats roster. He’ll be a clear player to focus on once training camp begins in earnest come late July.

Then you’ll be hearing his name quite a bit…