A quiet morning on this Tuesday, but here’s a quick look at this morning’s top stories:

Gronkowski Lead All Patriots Receivers In 100+ yd games in 2015 – Taking a quick look at the numbers from last season, there were nine 100+ receiving yard performances by Patriots receivers in 2015, and it’s no surprise who the leader was.

Rob Gronkowski lead the way with five such performances during the regular season, followed by Danny Amendola (2) as the only other player with multiple games reaching that milestone.  From there Julian Edelman, Brandon LaFell and James White each finished with one game apiece.

Here’s a quick look at each player along with their totals from each game:

Both Gronkowski and Edelman had over 100+ yard performances during the playoffs, with Edelman finishing with 10 receptions for 100 yards in their Divisional win over Kansas City, while Gronk caught 8 passes for 144 yards along with a touchdown in their loss to the Broncos in the AFC Championship game.

As far as NFL receivers who lead the league during the regular season in that category, that honor was held by the Jets’ Brandon Marshall (10), followed by the Steelers’ Antonio Brown (9), Atlanta’s Julio Jones (9) and the Giants’ Odell Beckham Jr. (8)

Bostic Shipped Back to NFC Central – After making a deal with one NFC Central team last year for linebacker Jon Bostic, the Patriots made a move on Monday to ship him back to that Division.

According to ESPN’s Field Yates, the Patriots made a trade with Detroit to send Bostic to the Lions, and in return they’ll receive a conditional 7th round draft pick.

New England originally gave up a 6th round pick when they traded with Chicago for Bostic last September, and following a season where Bostic played limited snaps on defense and primarily contributed on special teams, they obviously decided to try and recoup a pick back after electing to make a move with former Patriots’ director of pro scouting Bob Quinn, who is now the Lions general manager.

Bostic was already far down the depth chart given the talent the Patriots have at the linebacker position.  Following the additions of both Kamu Grugier-Hill and Elandon Roberts, who were both drafted by New England, the position became pretty crowded. So the fact the Patriots were able to get a draft pick back was certainly a positive.

He finished with just one defensive tackle and two special teams tackles for the Patriots after appearing in 11 games in 2015. 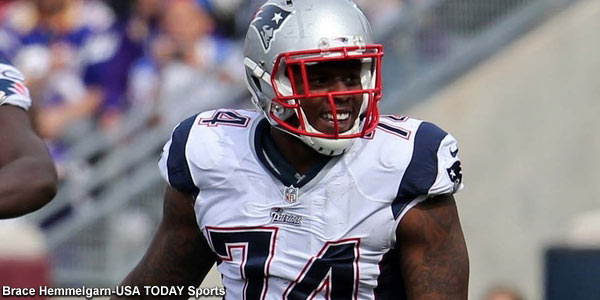 Former DT Easley Works Out for Bengals – After former first-round pick Dominique Easley’s surprising release this offseason, he remains without a home and is still out there shopping his services as he tries to catch on with a new club.

Easley is reportedly trying his luck out in Cincinnati, with the NFL Network’s Ian Rapoport reporting on Monday that the former standout from Florida worked out for the Bengals.

New England took a risk when they selected Easley with the 29th overall selection in 2014, but it didn’t pay off after the defensive tackle twice ended up on injured reserve and apparently had some internal issues with the team that possibly lead to his release.

The good news is even after the loss of Easley, barring injuries, the Patriots take a pretty good group into training camp up front on defense.

Manning Tutoring Tannehill – Ryan Tannehill is back at work trying to make the Dolphins a playoff contender and he got a little help from a Patriots’ rival who likely provided some insight into helping make Miami a little more dangerous this season.

According to the Miami Herald, Peyton Manning recently paid a visit down in South Florida with Dolphins coach Adam Gase, who Manning played under when Gase was the offensive coordinator in Denver.  While he was there Manning spent some time with Tannehill, who likely gained some insight on how to better attack the Patriots from the guy who beat them to advance to the Super Bowl just a few months ago.

“It was really cool,” Tannehill told the Miami Herald’s Barry Jackson. “A guy that had his career, the living legend he is, coming off a Super Bowl winning season — it was really cool just to be able to sit and pick his brain about things he’s done in this offense and football things in general: snap counts, things you like, the way you want guys to run routes, little details about the game. We really just got to talk the game, which is something we both love.”

Tannehill’s record overall is 3-5 against the Patriots, although he’s had more success as of late.  After starting out 0-3, he’s won 3 of their last six meetings, with each victory coming at home and the most recent two being by 10 or more points.  Tannehill lead the Dolphins to a 4 point win in a 24-20 win back in 2013, 13-points in a 33-20 win in 2014, and a 10-point edge in a 20-10 win last season that ultimately ruined the Patriots shot at a top seed and played a key part in Manning having home field in his final game against Brady and Belichick.

After meeting with Manning, Tannehill is just hoping he’s able to get close to the level that the retired quarterback was able to reach during his career.

“He is something I aspire to be, as good or better as he is one day,” said Tannehill.  “Hopefully, we’ll be able to get him to come around some more.”

SOCIAL POST OF THE DAY:
Motivational Monday – Cyrus Jones trying to live up to wearing the number #24.