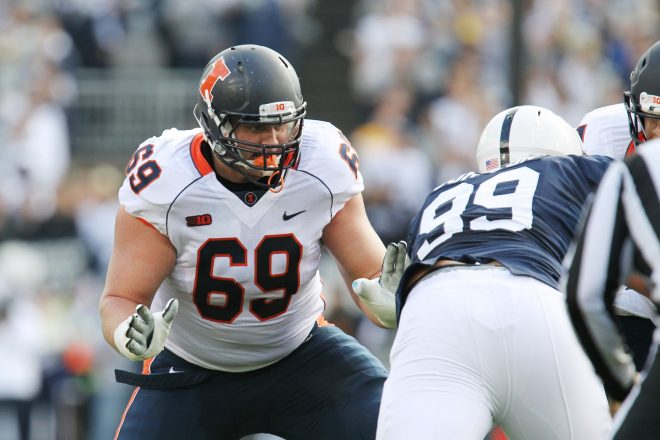 The NFL Draft is done and the Patriots picked up a pretty good mix of players across the board, although they came away without a running back. However, there’s a common theme within this group of Patriots 2016 draft picks, with several having traits that seem to make them great fits with this club.

Needless to say, it sets up what should be an interesting stretch heading into training camp, and here’s a quick rundown of the players taken this weekend: 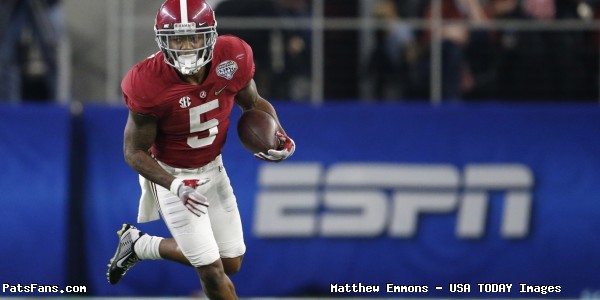 Cyrus Jones should be a great addition to the Patriots’ secondary.

Name: Cyrus Jones
Position: CB
Round: 2
Selection: 60th Overall
College: Alabama
Summary: An athletic cornerback with terrific cover skills and closing speed, who despite his size at 5’10” is tough and not afraid to come up and make the tackle in the ground game.  He’s also a dynamic punt returner who should be able to help take some pressure off of new teammate Julian Edelman. 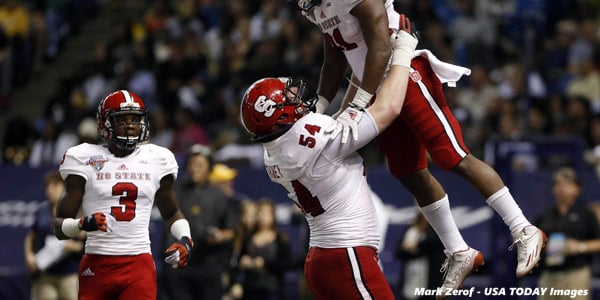 Name: Joe Thuney
Position: OL
Round: 3
Selection: 78th Overall
College: North Carolina State
Summary: A solid offensive lineman who played both guard and tackle in college and should give Tom Brady some additional help up front as he joins a group that didn’t exactly perform well last season, and struggled in the AFC Championship Game. 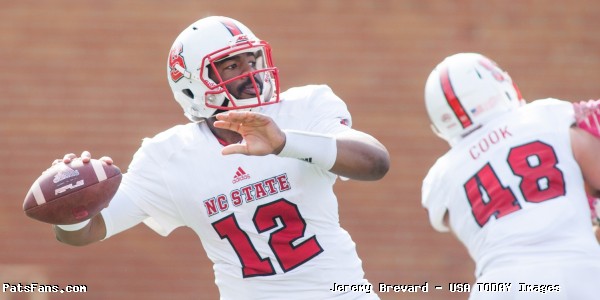 Name: Jacoby Brissett
Position: QB
Round: 3rd
Selection: 91st Overall
College: North Carolina State
Summary: Brissett was a decent passer in college and joins his fellow college teammate Joe Thuney, showing good accuracy while also having done a good job reducing his touchdown to interception ratio as his collegiate career went on and improving his ability to take care of the football.  With the uncertainty with Brady heading into the season, Brissett gives New England some depth behind Jimmy Garoppolo, but he’ll also have the opportunity to learn and develop behind one of the best in the game in Brady. 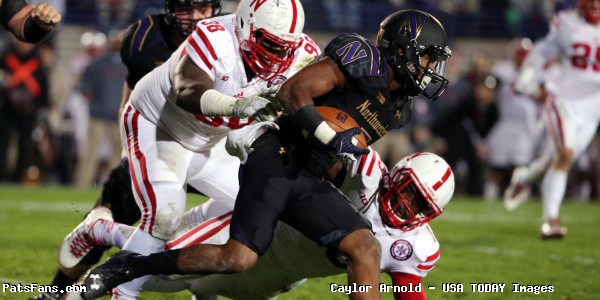 Name: Vincent Valentine
Position: DT
Round: 3rd
Selection: 96th Overall
College: Nebraska
Summary: Valentine is an interesting prospect, and at 6’4″, 329-pounds he’s a big presence who is yet another addition to the Patriots revamped defensive line.  He’s a disruptive player and despite battling through injuries during his junior season finished with 4 tackles for a loss along with 3 sacks.  He’s a player with a lot of potential and having played for a school like Nebraska, he’s certainly no stranger to playing in big games. 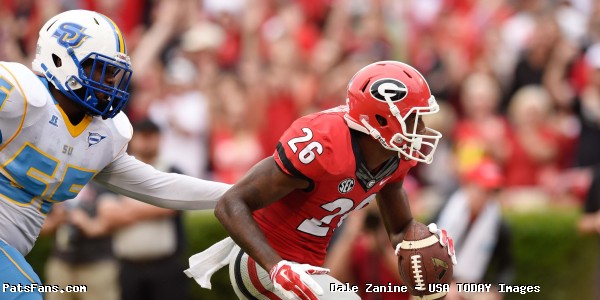 The Patriots may have finally found themselves a playmaker in Mitchell. (USA TODAY Images)

Name: Malcolm Mitchell
Position: WR
Round: 4
Selection: 112th Overall
College: Georgia
Summary: The addition of Mitchell appears like it could give the Patriots the playmaker they’ve been looking for to strengthen their offense. He’s listed at 6’0″ which gives Tom Brady a taller receiver to target and also ran a 4.40 40-yard dash during private workouts. The interesting thing about Mitchell is that he’s also spent time at cornerback, which gives him the advantage of having some familiarity with how defenders will play him. He also has great body control and has shown a great ability to adjust to the football, and he’s also one of those guys who isn’t afraid to fight for the football. Overall, he should be fun to watch in training camp and adds to what is already a pretty competitive group. 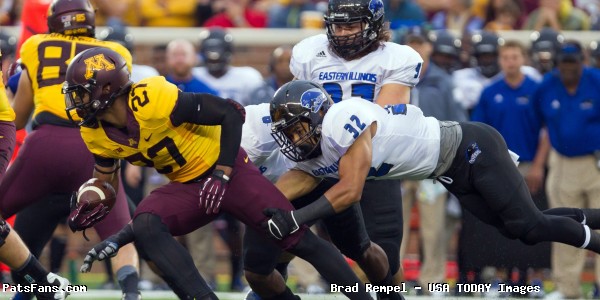 Grugier-Hill gives the Patriots another athletic player in their defense. (USA TODAY Images)

Name: Kamu Grugier-Hill
Position: SS/LB
Round: 6th
Selection: 208th Overall
College: Eastern Illinois
Summary: The Patriots grabbed a teammate of Garoppolo with Grugier-Hill’s selection, adding an athletic linebacker who was certainly a play-maker during his senior season.  He finished the season with an incredible 16.5 tackles for a loss along with 6.5 sacks, and also had an interception and a fumble recovery.  He’s certainly an intriguing player and should be a fun one to keep an eye on. 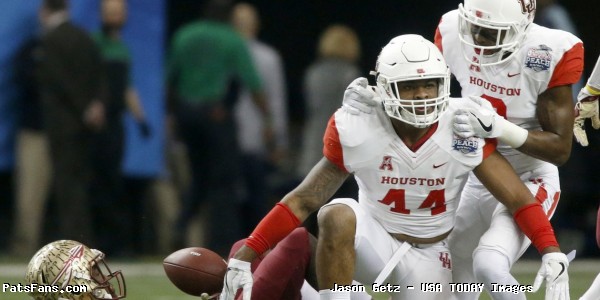 Roberts was a solid player during his collegiate career in Houston.

Name: Elandon Roberts
Position: ILB
Round: 6th
Selection: 214th Overall
College: Houston
Summary: Roberts is great story, having had a solid career for the University of Houston and turning himself from a good player into an NFL-ready prospect.  His coach, Tom Herman, called Roberts a “self-made man”, which obviously shows you the type of work ethic and respect the former Houston linebacker had as a member of his program.  The theme of what New England was looking for seems to fit the mold of what Roberts provides, with the linebacker finishing with a breakout season, amassing 142 tackles, including six sacks, 19 tackles for a loss, an interception, and two forced fumbles. 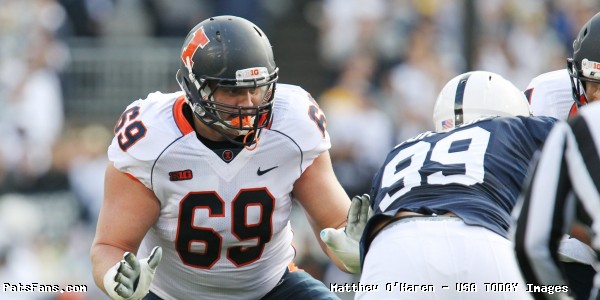 Ted Karras should bring plenty of attitude and intensity to the Patriots’ offensive line.

Name: Ted Karras
Position: OG
Round: 7th
Selection: 221st Overall
College: Illinois
Summary: One of the biggest things missing up front on New England’s offensive line was some nastiness and intensity last season, and the selection of Karras is going to be one of the more interesting ones to watch during training camp.  He’s an intense player, to the point where his pregame preparations are one of the more unique ones out there.  Ryan Hannable of WEEI pointed out that before each game, Karras pours two bottles of water over his head and yells like a Viking, and you have to love having a guy like that on your offensive line and in your locker room.  That type of approach and attitude tends to be infectious and if that ends up being the case, we should see a big improvement from this group in 2016. 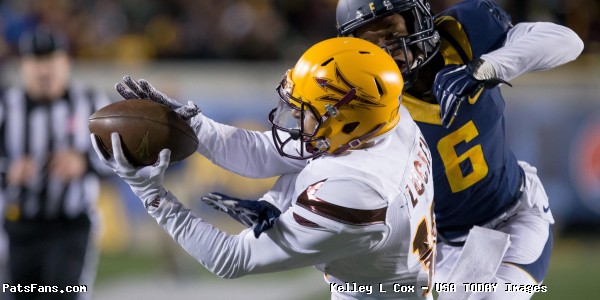 Devin Lucien was considered to be one of the biggest sleepers in the draft.

Name: Devin Lucien
Position: WR
Round: 7th
Selection: 225th Overall
College: Arizona State
Summary: It’s hard to explain exactly what the reason is, but 7th round picks seem to offer the most intrigue compared to other rounds and Lucien certainly falls into that category.  He was a solid receiver for ASU and Pro Football Focus actually named him the No. 1 sleeper in the draft a couple weeks ago.  Some scouting reports seem to believe that Lucien was the victim of a talented draft class that simply forced him down the board, and given his strong hands and his ability to adjust his body to the football, he seems like he could be yet another player to keep an eye on.

There seems to be a common theme among these players and overall it’s one of the more intriguing drafts in recent memory.  For now, this one’s in the books and now we’ll see in the coming months which players emerge as potential play-makers for the Patriots this season.

By: Robert Alvarez
The Date and time for Vince Wilfork's Patriots Hall of Fame induction ceremony is announced by the team,
20 mins ago