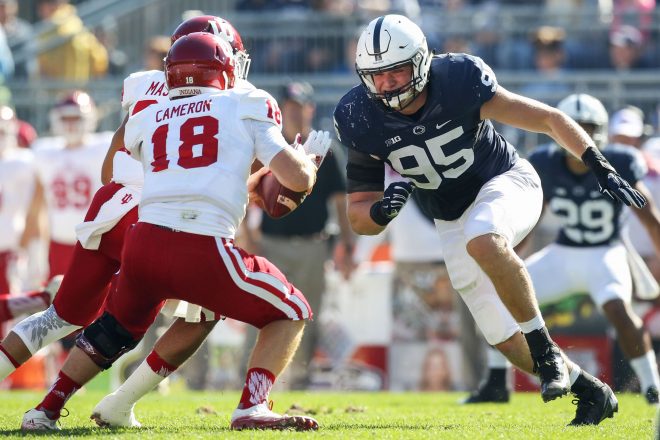 The Patriots are deep at defensive end, even after trading away Chandler Jones to the Arizona Cardinals. Jabaal Sheard and Rob Ninkovich return and the team added Chris Long in a free agent signing. Also returning are last season’s draft picks Trey Flowers and Geneo Grissom, as well as Rufus Johnson who can also play linebacker.

But edge rushers are like cornerbacks, you can never have too many good ones and although the team is expecting both Flowers and Grissom to make that second year jump in production, that won’t stop the Pats from looking at any intriguing prospects that could be of interest either in 2016 or next year with a bit of seasoning.

Carl Nassib from Penn State was a former walk-on player who elevated his game on the edge to lead the country in sacks with 15.5 in 2015 and also had 19.5 tackles for loss (TFL) and six forced fumbles as well as an interception for the Nittany Lions.

Nassib has an NFL-ready frame at 6’7, 277 pounds and can easily add some extra muscle at the next level. With a quick burst off the line, he has good straight-line speed that allows him to beat his opponent to the edge.

With his long arms and good hand movement, he’s able to shed blockers when rushing the passer and keeps his pad level low. Nassib is a powerful, punishing tackler with a non-stop motor. 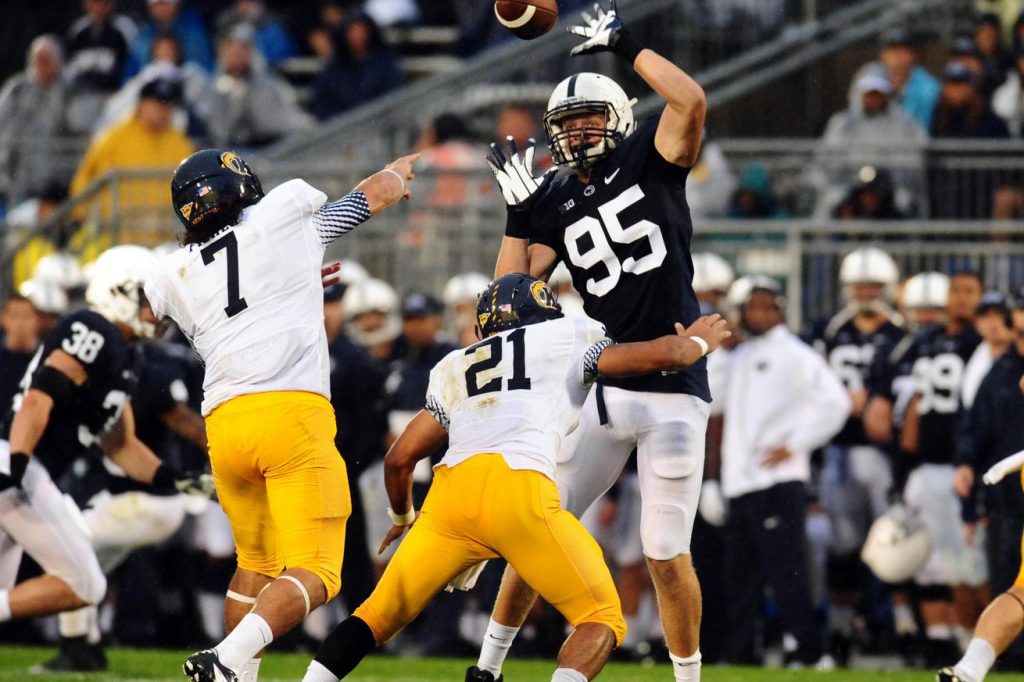 – Quick first step and good straight-line speed off the edge

– Needs to build up lower body, has somewhat thin legs

– Over-aggressive at times and will overrun the play

What his Role Will Be:
Nassib’s role would be to be a part of the rotation outside for the Patriots defensive line. He’d project initially as a sub-package pass rusher to add depth and fresh legs to the Patriots pressure on the QB.

Will his Role Change from Year 1-2?
Yes, with some added muscle on his frame and increased ability to set the edge, Nassib could become a three-down starter for the team.

What Current Player on the Roster Will He Replace?
He’ll challenge Flowers and Grissom for reps and with a strong camp showing could push one of the interior players off the roster.

Conclusion:
Nassib would fit in well with the Patriots defensive system as he is a natural 4-3 defensive end. He comes from a football family and is a very dedicated, hard worker that is possibly just scratching his potential as a football player. He was told by former Penn State and Patriots coach Bill O’Brien to forget about playing in the NFL. Six months later, O’Brien awarded him a scholarship.

While he’s still raw as a pass-rusher, his production in his senior year makes him an intriguing option. Still the question remains, is he a one-year wonder or a legitimate emerging prospect? With the length, power and production he’s shown as well as his dedication to his craft, it certainly looks like the latter.

Nassib is a player who doesn’t jump off the screen athletically at one watching his film. But he’s got speed, and continually makes plays. He’s got the desire and drive as an underdog that will play well with Bill Belichick and the coaching staff.

He projects in the Patriots system to be a Potential Starter for the Patriots. He should fit in very well into the NE defense as a member of the defensive end rotation.

Nassib’s highlight film can be found here, courtesy of illinoisaaron:

By: Steve Balestrieri
“I think they’re a 12-win team,” Ninkovich said on Greg Hill’s morning show. “Listen, six months ago I thought they were a nine-win team.
2 hours ago