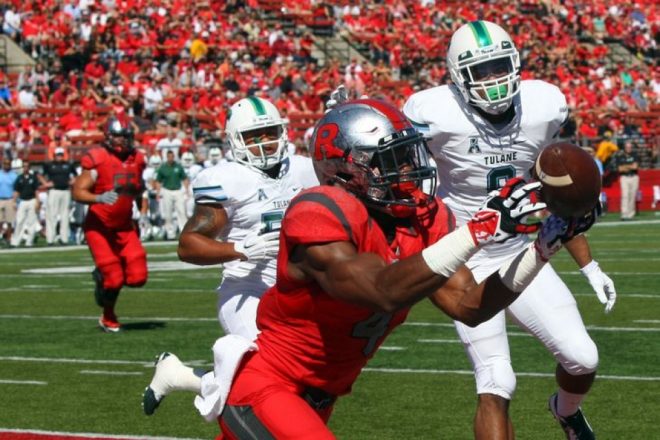 The Patriots have addressed the wide receiver position in free agency signing Chris Hogan away from the Bills and Nate Washington who was with Houston in 2015.  But they still have a need for some more depth at the position and could use an influx of youth in there.

With Julian Edelman, Danny Amendola, Hogan, Washington and Aaron Dobson at WR, with Rob Gronkowski and new addition Martellus Bennet added into the mix at tight end, the targets for QB Tom Brady appear to be on paper formidable. Add in a healthy Dion Lewis out of the backfield and the offense looks to be one of the best in the league.

With the upcoming draft they can select a player that will fit the system and they won’t be putting pressure on him to produce right away, but to develop the way the team wants.

Leonte Carroo from Rutgers could be the next player to keep the Scarlet Knights pipeline to New England alive. His skill set makes him an attractive possible Patriots WR target in the draft.  He’s been a very consistent productive receiver for the past three seasons in New Jersey where he’s averaged over 20 yards per reception the last two seasons. Had 217 career catches at Rutgers, of which 31 went for 25 yards or more.

Carroo has good size at 6’0, 212 pounds and is a muscled, strong receiver with very good athleticism despite not being the fastest WR (4.50, 40 time). He has good body control and vision and can find holes to make yards after the catch.

Plays taller than his height due to very good leaping ability, very good hands, he’ll catch the ball away from his body and snatch it out of the air. Despite an off-field incident, has leadership and was a team captain. Also plays STs and was on Rutgers’ coverage unit.

The Patriots not surprisingly, conducted a formal interview with Carroo recently.

– Very athletic receiver, can break off verticals to come back and make catches

– Cuts well and will gain separation with sharp moves inside

– Adjusts very well while the ball is in the air

– Had an arrest for assault (charges dropped) but a red flag

– Has decent but not breakaway speed, won’t run by corners

– Improved but can still struggle with press coverage

What his Role Will Be:
His role will be as an outside wide receiver with the Patriots offense. He’ll compete for the Brandon LaFell role the past two years. Working the sidelines, deep slants and the comebacks. With his size and athleticism, he should be well suited for it.

Yes, with improved route running and experience in the Patriots offense, he’ll be looked to in Year 2 to provide a big jump in production.

The already departed LaFell and he’ll compete with Aaron Dobson for a roster spot.

Good, worked on the coverage units for Rutgers

Carroo, in addition to the obvious Rutgers’ connection seems like a great fit for the Patriots offense. With good size and very good athleticism, he’ll fit perfectly in the New England short to intermediate passing game.

His route running and learning the Patriots complicated route tree will need some work but with the depth they have at the present time, the Patriots can take some time to develop him slowly.

But he’s a good and willing blocker in the running game, will play special teams and has good reliable hands. Add in his leaping ability and the desire to consistently get extra yards after the catch makes him an attractive target for the Patriots.

The team will have to check out his background closely after the off-field incident that caused him to miss two games in 2015. But barring any red flags, Josh McDaniels could find a nice role for him as an outside receiver in the offense.

He projects in the Patriots system to be a Potential Starter with time. He should be available in the middle rounds of the draft and the Patriots with a pair of Round 3 selections could snatch him there.

By: Robert Alvarez
Prior to Sunday’s matchup with the Baltimore Ravens, the New England Patriots held a special induction ceremony on Saturday for former nose tackle Vince Wilfork…
3 hours ago

By: Robert Alvarez
A look at defensive lineman Davon Godchaux’s journey to the NFL from Louisiana State University Football to the New England Patriots.
5 hours ago

By: Ian Logue
Considering the reaction coming off the field on Sunday by Mac Jones after Calais Cambpell landed on his left ankle, it sounds like the news…
7 hours ago

By: Ian Logue
Some thoughts following the New England Patriots dropping a frustrating one to the Baltimore Ravens on Sunday.
8 hours ago

By: Mark Morse
Mac Jones's decision-making has been awful. He has regressed badly from last year.  I strictly blame the coaches and the change of offense.  Who does…
10 hours ago