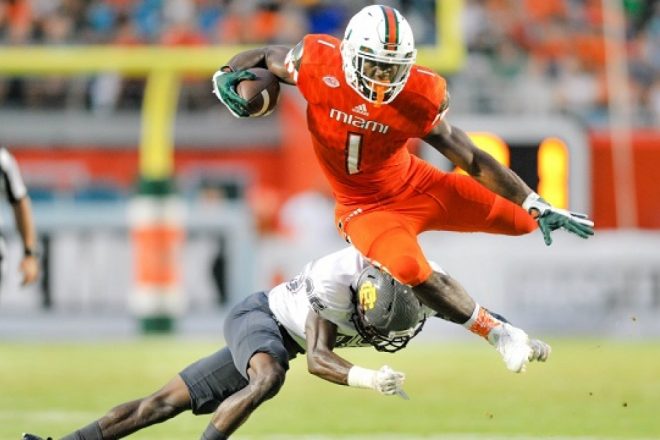 The Patriots suffered a slew of injuries in 2015 but one area where they were rather fortunate was at the cornerback position. Although Tarell Brown ended up on IR and Justin Coleman was banged up during the season, the fact that Malcolm Butler and Logan Ryan stayed healthy all year long was a blessing.

Now the Patriots are faced with the 2016 season and needing more depth. Butler and Ryan return as does Coleman and last season’s injured rookie Darryl Roberts. Roberts turned some heads in training camp and started the first preseason game but was injured in that contest and ended up on IR.

He and Coleman are unproven at this point and with Brown now a free agent, the team needs to add some new blood. Brown or another free agent can still be brought in anytime between now and the beginning of training camp but the draft will bring some intriguing options.

Artie Burns from Miami is a kind of under-the-radar player despite playing for the “U”. He’s a supremely talented athlete who ran track as well as playing football. Possessing ideal size at 6’0 and 193 pounds, he has the frame to add some weight without losing any of his athleticism. Burns plays much faster than his 4.46 time in the 40-yard dash recorded at the NFL Combine.

Burns is a playmaker who led the ACC with six interceptions in 2015. He’s still raw with his technique at times but with his long arms, he very effective at jamming receivers at the line of scrimmage. He has experience at corner as well as free safety but is best suited at the next level as a cornerback.

– Proto-typical size for an NFL cornerback

– Excellent body control; can adjust to the ball in the air and make plays

– Tackling is sloppy, and needs work

– Aggressive style of play will draw plenty of flags

– Needs to add some bulk at the NFL level

What his Role Will Be:
His role will be competing for one of the starting cornerback roles. With his size, speed and physical, aggressive nature he would be ideally suited for the outside corner role in the Patriots man coverage schemes.

Will his Role Change from Year 1-2?
Yes, with a little polish he could be a starting left corner if the need arises

What Current Player on the Roster Will He Replace?
His roster slot would be in competition with Coleman or Roberts. If he shows he’s ready to play a bigger role, the team could move Ryan into the slot and play him outside with Butler.

What is his ST Value?
Good, he had experience as a kick returner at Miami

Conclusion:
Burns is not just a track star who wants to play football. He has legitimate cornerback skills and he got a reputation for making QBs pay who tried to test him in the ACC. He’s a physical defender that is best served to play in man coverage.  He can use his length to get his hands on opponent’s wide receivers and jam them up at the line, but has the speed to turn and run with them into the secondary.

Shows good awareness, can read the play and slip by would-be blockers in the running game and showed some decent timing by blitzing on occasion. His tackling is his weak spot and he could suffer in run support initially.

He’s a mature young man who had to forego his senior year at Miami to care for his two younger brothers and his son after his mother died of a heart attack in October. His father is incarcerated. He’s the kind of young man that Bill Belichick will love; a mature young man who is passionate to learn his craft and a smart, aggressive football player.

While he could add a few pounds, he’s a very talented player and with some hard work, that he undoubtedly put in, he can be a very good NFL corner. He’s slotted to go somewhere between Rounds 2-3. If he’s still around at pick #60, the Patriots should pounce.

He projects in the Patriots system to be a Potential Starter on Day 1. He should fit in very well into the NE defense.

By: Robert Alvarez
Patriots Chairman and CEO Robert Kraft is honored by two organizations for his charitable and humanitarian work.
10 mins ago