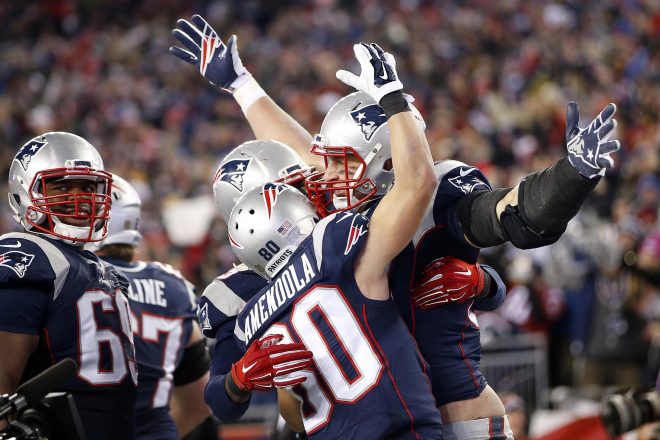 The defending Super Bowl Champion New England Patriots entered Saturday afternoon’s match up with the Kansas City Chiefs primarily healthy for the first time in over a month with the headliner wide receiver Julian Edelman returning to the field.

Julian Edelman leads the team out of the tunnel and sprints to the end zone with a fist pump for the crowd pic.twitter.com/odDFBAM81L

After missing practices and fears of another injury, tight end Rob Gronkowski was active, and made his presence known early. Scoring on the Patriots first drive of the game.

Brady in the red zone? You know how this ends #GronkSpike https://t.co/HcidBZfz6B

With the score 7-3 in favor of the Patriots, fans were treated to possibly one of the greatest runs in Tom Brady’s career.

He was a little bit fired up afterwards.

TFW your chef has kale salad with pink Himalayan sea salt waiting for you after the game https://t.co/GSw3Hbi3qT pic.twitter.com/nPaisRuVdL

The ruling on the field was he was a yard short of the goal line, but Brady would sneak it in a play later for the score. The Patriots jumped out to a 14-3 lead and this ridiculous statistic was passed around Twitter.

Brady now has as many career playoff rushing touchdowns as LaDainian Tomlinson.

With the Chiefs driving following the Patriots score, Chandler Jones stepped up big following his controversial week by forcing this fumble on running back Knile Davis that was recovered by Dont’a Hightower.

This look like a forced fumble to you? pic.twitter.com/yvIg85L8F2

Gronkowski wasn’t finished as Brady would hit his favorite postseason target yet again in the end zone but this time it was historic. With eight minutes to go in the third, the Patriots had a comfortable 21-6 lead as the offense appeared to be back in form

His brother Jason was impressed.

The Chiefs tried to make it interesting late in the fourth quarter by cutting the deficit to 27-20 but head coach Andy Reid’s clock management struggles returned.

they just bled over 5 minutes off the clock. Andy Reid gonna Andy Reid.

I need a picture of Flavor Flav and his clock with Andy Reid's face.

In the end, the Patriots held on for a 27-20 final score to advance to the AFC Championship game for a fifth consecutive season following the recovery of an onside kick attempt.

Belichick reflecting on a 5th straight #AFCChampionship game is the quote of the night. https://t.co/yfzKHsJR3e

Good win and another check!!! #GoPats

Thumbs up! Denver here we come.

The Patriots will travel to Denver for a date with Peyton Manning and the Broncos next Sunday with a trip to the Super Bowl on the line.