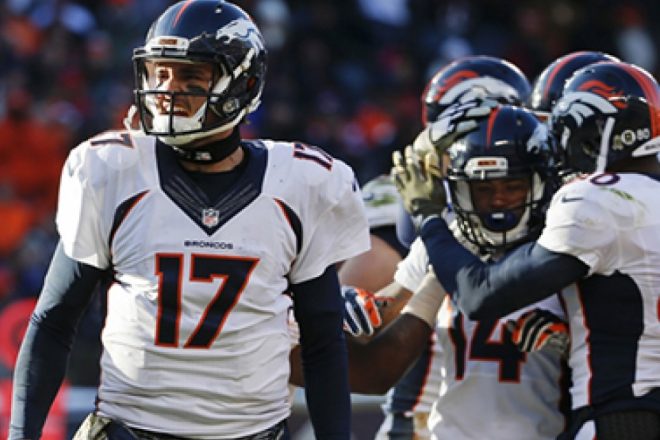 It seems like forever ago that Tom Brady took over for an injured Drew Bledsoe and made his first career start in Indianapolis, which came against an elite NFL quarterback as he prepared to face Peyton Manning in Week 3 back in 2001.

But Brady rose to the occasion and entered that game completely unphased and went out and put up 44-points as New England rolled to a 44-13 road win.

This weekend they’ll be taking on a quarterback who will be making his second career start in Brock Osweiler, who is one week removed from winning his first start against the Bears out in Chicago.  Osweiler is about to face a potential future Hall of Fame quarterback in Brady, and he seems just as relaxed about this game as Brady was heading into his.

“I think the first start was more significant — just getting that first one under my belt. Like I told you guys last week, it’s just a football game,” Osweiler told the Denver media this week. “No offense or anything, but you guys are the ones who build it up on social media and things like that.”

Osweiler played pretty well in his first career start, completing 20-of-27 for 250 yards and two touchdowns, with the Broncos ground game also piling up 170 yards.  New England’s defense has done pretty well in slowing down opposing team’s running backs, which may force the fourth-year quarterback to have to throw the football more than he had to last week against the Bears.

He’s incredibly tall, standing at an astounding 6’8″ and the Broncos snagged him with the 57th overall pick back in 2012 out of Arizona State.  Up until now he’s been able to learn behind one of the NFL’s elite quarterbacks in Peyton Manning.  However, with Manning now sidelined by injuries, Osweiler finds himself in the same position that Brady was all those years ago as he steps into the lead role. For now he’s taking it all in stride but this is a game that’s as important to his team as it is to the Patriots, as this is a contest that could determine whether the Broncos are playing at home should these two teams meet in the postseason.

From what he’s seen so far, he’s impressed with New England’s defense.

“Shoot they have a lot of talent on that side of the ball,” Osweiler said of the Patriots. “The thing that I think is special about them is that they all play hard. They all play like it’s their last pay. You can really see that on tape.”

However, overall, he’s been pretty laid back.  If he’s concerned at all about facing one of the best quarterback’s in the game, you can’t see it in his face.  He’s watching film and just trying to prepare and approaching things the same way he did last week before he took the field against the Bears.  Obviously it worked out pretty well after the Broncos won their 8th game of the season.

He was named the AFC Offensive Player of the Week for his effort, although when he was informed of his accomplishment, he didn’t believe it.

This time around he’ll battle a tough Patriots team who is coming off of a physical game against the Bills Monday night and have had a short week of preparation as they get set to make the tript out to Denver for this Sunday’s night match-up.  It should be a good battle between these two teams and Osweiler knows it won’t be easy.  Looking at the Patriots, he’s not changing anything but from what he’s seen so far and he knows this week should be a tough game as he tries to get his second win.

“Everything really feels the same exact way,” he said. “The only thing that’s different is now this is the second time I’ve done the press conference. Other than that, everything feels exactly the same.”

Hopefully for the Patriots sake, the result will be a little different for him.