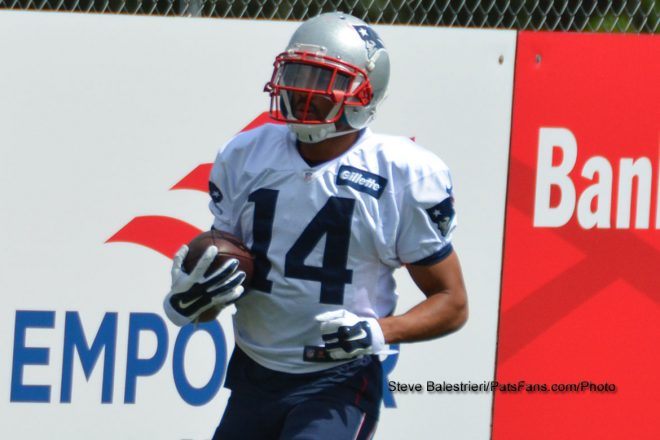 The Patriots activated Chris Harper off of the practice squad on Tuesday, and this is a prime chance for the UDFA rookie wide receiver to carve out a role for himself. Not only while Julian Edelman is on the shelf until the playoffs start but with an eye towards the future as well.

In a corresponding move the team cut offensive lineman Chris Barker who was activated just a few days ago. Barker will no doubt be signed back to the PS if he clears waivers today and outwardly that is a good sign that either Sebastian Vollmer or Marcus Cannon…perhaps both, will be available this week.

Harper was one of the UDFAs that seems to turn heads during training camp for the Patriots every year. He was a sought after rookie free agent but opted to sign with the Patriots as he thought he’d have a good chance to showcase his talents. He made the decision to come out of college a year early, but was confident enough in his ability that he’d stick at the next level.

The 5’11, 185 quick WR from Cal played in 35 college games with 23 starts and finished seventh all-time in school history with 163 receptions for 2,030 yards receiving. In addition, he caught 13 touchdown catches which ranks 10th in school history. Harper also caught a pass in 29 straight games.

In early August during the dog days of training camp, the WR position was beset by injuries. Julian Edelman, Brandon LaFell, Aaron Dobson and Brian Tyms were all sidelined. So Harper got a chance to show what he can do and although he had his rookie mistakes, overall he impressed with his athleticism and quickness to learn the offense.

Quicker than fast, Harper needed to add a bit of muscle to his frame and refine his routes but showed a nice ability to cut and get open and was one of the key players to watch during this time. During training camp he displayed nice hands and made catches away from his body.

Harper was the “X”-receiver at Cal and was the Bears outside option in the passing game. With Edelman on the shelf, the Patriots will no doubt utilize Danny Amendola where his strengths lie which is inside in the slot. The outside wide receiver positions at the “X” and “Z” will be held by LaFell on one side and either Harper, Dobson or Keshawn Martin on the other.

Martin came over from Houston and was in a similar offense with the Texans. He got some game action in but recently has had a hamstring issue that has kept him on the shelf. Martin came from Houston with the rep as mainly a KR. Dobson has the size and straight line speed advantage over Harper but the rookie and Martin both have the capability to help out somewhere Dobson does not. And that would be special teams in the kick return game.

During those practices in August, Harper got some reps in at both kick and punt returning, something he was reasonably adept at in college.

“I think it’s really important to be on special teams here because, you know, even if you don’t make it on the team as a receiver, you can make it on special teams,” Harper said to the media back in camp. “And then down the road you can work your way into it depending on the circumstances that happen.” And that is exactly what has happened.

With Amendola getting a heavier workload at wide receiver, the Patriots may opt to lighten the amount of work for him elsewhere. Harper can fill in as a returner as well as a wide receiver on the outside.

During the pre-season game against the Saints, Harper caught five passes for 69 yards and a touchdown. He showed good awareness when the play broke down and found an open spot in coverage in the end zone where Jimmy Garoppolo hit him for a touchdown. Just as importantly, he returned two punts for 55 yards in the contest.

So while the Patriots try to cope with the loss of Edelman with added onus on Amendola, Gronk and LaFell, there will be opportunities to others to flash and carve out a role, albeit a smaller one but an important role nonetheless.

Harper has good agility and maintains his speed out of his breaks. He showed a nice understanding of the routes the Pats love to run, the short-to-intermediate routes where a guy can develop chemistry with Brady. He looked good during the summer at running the quick outs, the back shoulder sideline catches and the skinny posts. He is also a very willing blocker, something the Patriots pride their WRs in.

He doesn’t have the straight-line speed to be a deep threat and won’t run away from defenders, but the Patriots offense is built for the above type throws and he could be a valuable addition there.

And Harper’s special teams contributions are an additional feather in his cap. The more you can do with the Patriots, the more valuable you are to the coaches. We are were rooting for the underdog during the summer, now it will be interesting to see how much he’s improved since then.