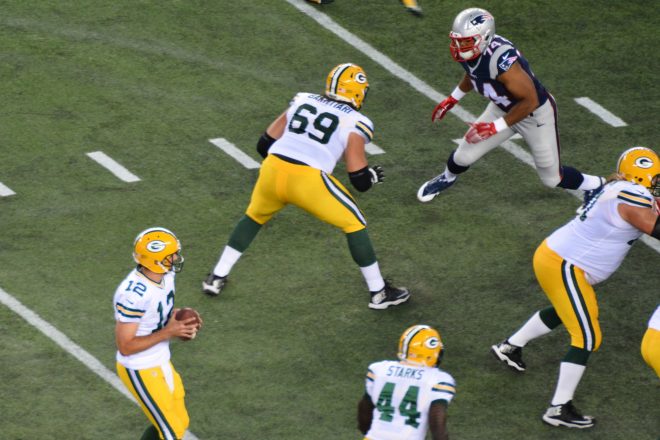 Even though the Patriots are not playing, Sunday looks to be a very good day for watching the NFL. The early CBS game in Boston as well as most of the U.S. has Ben Roethlisberger returning to the field after being shelved for five weeks with a knee injury as the Steelers host the undefeated Bengals in a key AFC North game. Most of the country will get the Giants at New Orleans in the early FOX game, and then Seattle at Dallas gets virtually universal distribution as the late game on FOX. All that is just the preliminary for the Sunday night game, as Green Bay travels to Denver in a clash of undefeated teams. If that’s not enough football for you there is also a morning game from London, though I doubt a Lions-Chiefs contest will generate very many eyeballs outside of Michigan and Missouri.

Happy Birthday in memoriam to Brian Piccolo. Born on Halloween in 1943 in Pittsfield, the Chicago Bear running back passed away all too early at the age of 26 from testicular cancer. If you have never seen the original version of Brian’s Song, you should do so – even though you won’t be able to get through it with a dry eye.

Happy 56th birthday to Kenneth Sims., the defensive end out of Texas that was selected first overall in the 1982 draft by the Patriots. Questioned about his work ethic in practices, Sims responded that ‘I’ll be there on game day’. That resulted in the derisive nickname ‘Game Day’ after so many performances in which he did not live up to his draft status. Sims was beset by injuries (he played in only 74 games over eight seasons) before drug use ended his career. Just a few weeks after Sims signed a two-year contract with the Pats in 1990 he was pulled over for driving 85 miles per hour; while he was pulling out his driver’s license an envelope containing cocaine fell from his wallet, leading to an arrest for possession of coke. The Patriots released him soon afterwards, stating that Sims had not been in good enough physical condition during a mini-camp; when no other teams showed interest Sims retired from the NFL.

In the first game after Jamaal Charles suffered a season-ending torn ACL, Charcandrick West had an inauspicious debut. West gained just 33 yards rushing and lost a fumble as KC scored only ten points against Minnesota, and lost their fifth consecutive game. Last week West bounced back with 129 yards from scrimmage, two touchdowns and no turnovers as the Chiefs defeated Pittsburgh 23-13. Detroit is giving up 6.1 yards per play (29th in the NFL) and has a negative 1.0 turnover differential per game (also 29th). I see no reason why the Lions would not be expected to find a novel way to lose yet another winnable game.

Many are still down on the Bears due to their horrible start to the season, but let’s not forget that was with Jimmy Clausen at QB throwing to a receiving corps that was without Alshon Jeffery. Minnesota’s 4-2 record is deceiving; they have defeated the one-win Lions twice and a pair of 2-5 teams (Chiefs, Chargers); on top of that they managed to lose badly to San Francisco.

Tampa Bay continues to take dumb penalties (second worst in the NFL at 88.8 yards per game), their defense is dead last in the NFL with opponents needing to gain just 11.0 yards per point, and the end result is an NFL-worst 29.8 points allowed per game. Lovie Smith’s outdated Tampa-2 defense has no clue how to cover opposing tight ends, as they are far too vulnerable to quick slants. If Kirk Cousins and Washington’s mediocre offense can score 31, what will Atlanta’s far more potent offense do?

The Giants lead the NFL in turnover differential (+1.4 per game), and the New Orleans defense is 30th with 405 yards allowed per game. Take away the horrible week six Monday night game at Philadelphia, and the Giants are averaging 26.5 points per game; I don’t believe the Saints will be able to stop the G-Men or keep up with them.

An awful San Francisco offense just got worse, with the new that RB Carlos Hyde is out with a foot injury. The St. Louis offense (18.0 ppg, 31st; 299 yards per game, 31st) is putrid as well, but it is still one up on the Niners. RB Todd Gurley and the Rams defense will be just enough to win this snooze-fest.

Since starting the season with three wins Arizona has looked mortal, losing to the Rams and Steelers while barely hanging on to defeat one-win Baltimore last week. The Cleveland run defense (151 yards per game, 32nd; 5.1 yards per carry, 31st) is a joke; Chris Johnson (567 yards rushing, 2nd in NFL; 5.1 yards per carry, 1st for all players with at least 80 carries) and Andre Ellington (9.0 yards from scrimmage per touch, 7.6 yards per carry) should make for a long day for Cleveland’s defense. The only thing holding me back a bit is Arizona playing on the road on a short week; if this was still at four points I would have more confidence in the Cardinals.

Pittsburgh gets not only a big emotional lift with a home game and the return of Big Ben, but also a huge boost in performance as well. Roethlisberger was completing over 75% of his passes for 10.3 yards per pass attempt before his knee injury – and that was for the most part without stud running back Le’Veon Bell on the field. Cincy is a solid, deep, well balanced team, but they are in a tough spot here and due for a loss. This should be a really great game for all NFL fans to watch.

Baltimore returns home after playing five of their first seven games on the road, though after playing in Arizona last Monday night they still have a short week to prepare and heal. At this point their season is virtually over; even though every game has been close, you have to wonder if or when they might start mailing it in. San Diego could be the perfect cure for the Ravens, as they are a team that continues to find ways to lose. With no running game thanks to a decimated offensive line the Chargers have become completely one dimensional and predictable on offense. San Diego is horribly inefficient on both sides of the ball, ranking 31st in offensive yards per point (18.3) and 29th in defensive yards per point (12.8). Baltimore’s once vaunted defense has become a shell of its former self , ranking 26th with 26.9 points per game allowed; this should be a high scoring game.

Zach Mettenberger (5.81 yards per pass attempt) and an impotent Tennesse offense (19.8 points per game, 30th) versus a Houston defense that allows 28.4 points per game (28th)… Or, Brian Hoyer (58.9% completions) and a Houston offense that is now without Arian Foster versus a Tennessee team that is 25th in turnovers (-4 differential). Tough call, but I’ll go with the more experienced quarterback playing at home.

As we saw last week with the favored Colts losing, teams that play the Patriots tend to have an emotional (and physical) letdown the following week. Factor in the coast-to-coast travel and you have a recipe for an upset. How the two clubs deal with injuries could play a large role in this game: Oakland LDE Justin Tuck is on IR and ILB Neiron Ball is out with a knee injury, while Jet center Nick Mangold is doubtful due to a neck injury.

Dallas ranks dead last in the NFL with a negative 1.5 turnover differential per game, and has one of the most inefficient offenses in the league (18.2 yards per point. 30th) as well as one of the most inefficient defenses (12.9 yards per point, 28th). As much as Seattle has underwhelmed this season, that’s just far too much to overcome against a decent team with a good defense.

Denver’s defense is very good, but let’s put things in context here. The Broncos have defeated one team with a winning record (Minnesota), and struggled in all but one game (a 12-point victory over the one-win Lions). Any and all of the five other games could have easily gone the other way, and in most cases they should have. Both defenses are good at taking the ball away (Denver first, 2.8 per game; Green Bay ninth, 1.7 per game) but the Packers don’t turn the ball over (four, second fewest in the NFL). The Broncos on the other hand have turned the ball over eleven times – including a league-high ten interceptions.

Despite being the beneficiary of an NFL-high 92.4 opponent penalty yards per game, the off-season paper champion Colts continue to underachieve. The Carolina pass defense is very good: they rank 2nd in the NFL with just 5.8 yards per pass attempt, 5th in completions (58.8%), are first with an opponent passer rating of 67.0, and are tied with Denver for the best TD:INT ratio (five touchdowns allowed to nine picks). Indy’s soft run defense plays right into Carolina’s strength, and their man to man coverage scheme should open up running lanes for Cam Newton to take off for big gains.