7 years ago at 1:36 am ET
Follow @IanLogue
Posted Under: Patriots Transcripts 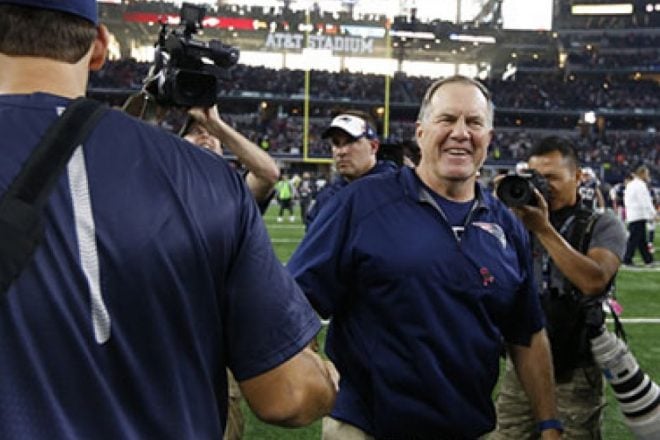 Always good to come into Indianapolis and win.  I thought our guys played hard, made a lot of plays. You know, we left some things out there but, you know, in the end we played well enough in all three phases to win and everybody contributed. Certainly got a lot of plays on special teams.  Offensively we had some runs and some passes that were good.  We were able to move the ball and score those 14 second half points or 3rd quarter points, to kind of take a lead there.  Defensively we had our hands on a lot of balls and played pretty well there in the second half time until that last drive.  So, gotta give the players a lot of credit, they played well tonight and I just think we’ve got to find a way to play better.  We’ve got a few guys banged up, we had some people step in, do a real good job for us, take extended snaps at various positions. So that was good too.  So it was good to have so many guys contribute and step up when we really needed them.

On what he saw on the Colts 4th Down play and how his special teams group stayed so calm:

Yeah, that special teams group works really hard.  You know, we expected this to be a gadget game, the kicking game, the onside kick, some kind of fake, fake punt, fake field goal.  You know, the punter ran the sweep against Tennessee a couple weeks ago so that’s something they’ve done in the past. We didn’t know what the play was going to be obviously, but no, they, you know went on the swinging-gate-type play.  We went over to the over shift and made sure we covered the inside part and reacted well to it.  So it was a good, heads up play, you know, by our punt return unit.  I thought we had good coverage from those guys from the opening kickoff, went down there and nailed them inside the ten or whatever it was, right around the ten. Then the onside kick, so obviously those were big for us too.

On the play where Jamie Collins blocked the kick:

Well, you know, on the Colts’ field goal protection they tried to get real low and protect those guys from getting knocked out of there by the defensive linemen.  So I thought we had an opportunity to go over the top of them and Jamie did, he made a great play on it.

On the adjustments they made to deal with the problems they had defensively early on:

We got out-leveraged by a couple of those crossing routes.  We changed a couple of our calls in man coverage and mixing probably a little more zone in some of those situations so we could, you know, keep the leverage on them.  But, I mean, that’s something they always do.  They run, definitely, their share of crossing routes, close splits, they have a lot of, you know, explosive receivers, the wideouts, the tight ends, so we just gotta…you know, have to do a little better job of leverage in those and you know did a good job not getting the ball thrown, you know, too far down the field too often.  There weren’t too many of those big plays.  We were able to get enough of a pass rush for us to do a decent job in the running game, you know, played pretty good on third down, third and fourth down for the most part.

On if they made it a point to get Gronkowski the ball more in the second half:

On the game Malcolm Butler played and the fact it seemed they went after him:

Well, I mean he was on Moncrief a lot and T.Y. some… they throw those receivers, I think they throw to them no matter who is one them. but Malcolm competed well and made some plays.  They have a good quarterback and they have good receivers so it was a good battle..

On the offensive line and the adjustments they made:

Well, Cam [Fleming] came in and Sea-bass flipped over, that’s kind of the way we practiced it for that contingency so unfortunately, that’s what came up and we had to go to it. I thought Cam stepped in there and played really competitively, Sebastian over on the left side. Tackle is a critical position.  Thankfully we had four guys play pretty well for us so far this year. It’s not a position you want to keep losing guys at but the guys that stepped in played well  Cam did a good job, Sebastian played well over on the other side.

On if there’s any word on Matthew Slater’s Injury:

On if he’s pleased with the way they were able to get LeGarrette Blount running well:

I thought he ran well.  I think we just, you know, we left yards out on the field in the running game. I don’t think it was as consistent as what it probably could have been or what we needed to be.  So we’ve just got to do a better job of coaching it and executing it. We got some out of it but we could have definitely used more.  So we’ve got to keep working on that.  But I thought that LeGarrette ran hard.

On if the run/pass balance was what he wanted it to be:

We don’t have a run/pass balance, we just try to score and win, that’s all.  If we run, we run.  If we pass, we pass.   Our goal is to win not to have a certain number of plays.