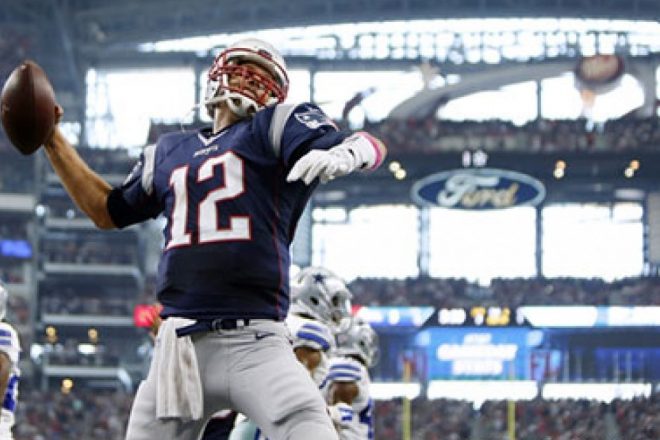 ARLINGTON, Texas – Much to the utter dismay of Greg Hardy, there was no Gisele sighting on Sunday.

Instead, her husband showed up. Tom Brady was sacked five times in the first half by the Dallas Cowboys, and two of them were by Hardy, playing in his first game of the season following a four-game suspension for an alleged spousal abuse charge. Hardy shot off his mouth during the week, Jerry Jones obliquely condoned his remarks, then he went out there and basically terrorized the Patriots for the entire first half.

But as you all figured, in the end, it was Brady who was covered in glory and Hardy who was covered in, well, you can choose whatever vile substance you’d like to see Hardy covered in. The Patriots took whatever the defense threw at them, held off the Dallas offense long enough until they figured out how to deal with Hardy, and came away with a 30-6 win at AT&T Stadium. Facing a depleted Dallas offense was nice, but even if Dallas had Tony Romo and Dez Bryant, you might figure that the outcome would not have been any different.

As a result, Dallas was held without a touchdown for the first time in 13 seasons. Quarterback Brandon Weeden (26 of 39, 188 yards, one pick, 67 rating) never found a rhythm until garbage time late in the fourth quarter. Both Jason Witten and Terrance Williams were smothered most all game long, again, until garbage time. Six of the first seven offensive possessions for Dallas were three-and-outs.

This offensive ineptitude, largely precipitated by the Patriot defense, enabled the Patriot offense to finally deal with the Dallas defense and put touchdowns on the board. Hardy and Rolando McClain were the most disruptive; McClain also had a sack, to go along with four tackles and four assists. What the Patriots were eventually able to do was to make in-game adjustments to neutralize the Dallas pass rush. In his postgame press conference, Bill Belichick admitted that Dallas mixed in some formations that they hadn’t practiced against and weren’t anticipating. 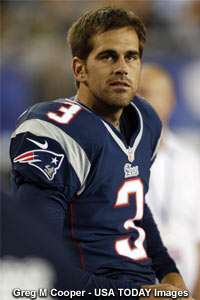 Late in the first half, the Patriots finally began to take control of the game. A 24-yard pass from Brady to Julian Edelman set up a 57-yard field goal by Stephen Gostkowski with 3 seconds left in the first half. The field goal was a career long for Gostkowski. The Patriots excel at scoring at the end of the first half and the beginning of the second half, and again it happened here as they opened the second half with a nine-play, 85-yard drive capped off by a brilliant one-handed catch by Dion Lewis in the right flat, putting a stunning deke on Barry Church, and going in for a ten-yard touchdown catch. This made it 20-3 Patriots, and it was pretty much lights out for the Cowboys.

The next drive also ended with a great pass reception. Facing second down and 13 on their own 41, Brady lofted a lob pass to a wide open Edelman along the left sideline. Edelman was able to put dekes on Brandon Carr and J.J. Wilcox and took it to the house, a 59-yard touchdown catch. On the play, Hardy laid out Brady, but the eternally brilliant Patriot quarterback went right to the sideline and was seen screaming “Let’s go!!!” to his teammates.

The Cowboys also shot themselves in the foot with two fourth quarter turnovers. Early on, Witten caught a seven-yard pass which would have been a first down. But he was popped by Jamie Collins and lost the football. Jonathan Freeny picked up the fumble and ran back the seven yards Witten had just gained. Later on, towards the end of the game, Weeden tried to hit Williams on a deep right sideline route, but instead hit Logan Ryan perfectly to thwart another scoring drive.

Brady finished with 20 of 27 passing for 275 yards, two touchdowns, and a 130.9 passer rating. Edelman had the most receiving yards with 120. But an emerging offensive force the Patriots continues to be Dion Lewis. The newest incarnation of Kevin Faulk, Danny Woodhead and Shane Vereen, Lewis had 34 rushing yards and a 5.7 yards per carry average, and also led the team with eight pass receptions. Lewis showed a great ability to cut back and sidestep would-be tacklers.

The win makes it five straight over Dallas, after the Cowboys won the first seven (the Patriots never beat Tom Landry or Roger Staubach). One has to wonder how the Landry Cowboys would fare against this Patriot team, with many of the previous wins coming against mostly bad Patriot teams. In their first visit to the new Cowboy palace, the Patriots did not look fazed at all, and the crowd was completely out of the game in the third quarter.

Next up for the Patriots will be a road game at Indianapolis. It was where Jonas Gray lit up the Colt defense for 201 yards rushing as the Patriots won their first ever game at Lucas Oil Stadium. But this game will be a grudge match for the Patriots, as it was against the Colts that DeflateGate was spawned. A steady diet of LeGarrette Blount (74 yards, 13 carries, 5.7 average against Dallas) will be in order, but the Patriots may have much more in mind.

The Patriots will say all the right things and do all the right things. But it will be hard to believe if the Patriots come out flat against Indianapolis, or if they don’t put their foot on the Colts’ throats all game long. Especially Brady, who has been the most scorned by this whole ordeal, who figures to have a monster game next weekend.

Meanwhile, Hardy now knows, we hope, that when he flaps his yap, the result won’t be what he thinks. Outside of Dallas, he has to be the most reviled person in the league. Even his owner didn’t come out and renounce his outrageous remarks about Gisele. As long as he can play well, Jones will put up with him and his baggage.

The Patriots will take the win, shut up and move on.