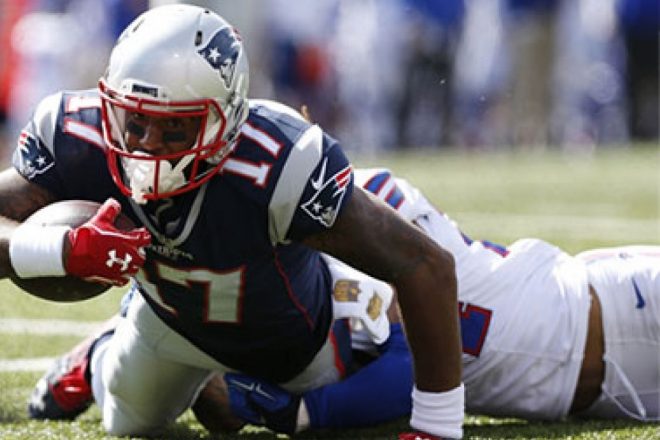 The journey of Aaron Dobson’s pro career in New England to this point has been flashes of brilliance followed by disappearances into obscurity over three NFL seasons.

Dobson was drafted by the Patriots in the second round of the 2013 NFL Draft. That same season the rookie saw action in 12 games and hauled in 37 receptions for 519 yards and four touchdowns.

In Week 9 against the Pittsburgh Steelers, Dobson had the first 100 yard game of his NFL career. He caught 5 passes from Tom Brady for 130 yards and 2 touchdowns. A foot injury in week 12 against the Broncos sidelined Dobson and he was used sparingly the remainder of the regular season.

His last significant contribution in 2013 was a 27-yard reception in the AFC Championship game loss to the Broncos.

When the Patriots won the Super Bowl last season, Dobson caught just three passes for 38 yards all year. Head Coach Bill Belichick had placed him on the inactive list for eight of the first twelve weeks of 2014 before he injured his hamstring against the Green Bay Packers which placed him on injured reserve the remainder of the year and playoffs.

Fast forward to Sunday at Ralph Wilson Stadium, with the Patriots still thin at receiver as Brandon LaFell continues to recover from an undisclosed foot injury, Dobson entered the game and didn’t disappoint.

On a day where Quarterback Tom Brady threw for 466 yards against a tough Bills defense, Dobson made his presence felt for the first time in two years as he hauled in seven receptions for 87 yards with just one drop. The total statistics were his highest offensive showing since the Steelers game.

Brandon LaFell isn’t expected back until week 7 at the earliest, the Patriots have a need for receiver depth and traded for former Houston Texan Keshawn Martin, who was inactive on Sunday instead of Dobson.

In a career that has seen few opportunities and hard luck injuries, Aaron Dobson certainly made the most of the one given to him on Sunday and will have a chance to really turn some eyes against a weak Jaguars defense next week.

This is Aaron Dobson's best statistical game since Week 9 of 2013.